EXPORTS RISE 1.5 PER CENT IN DECEMBER 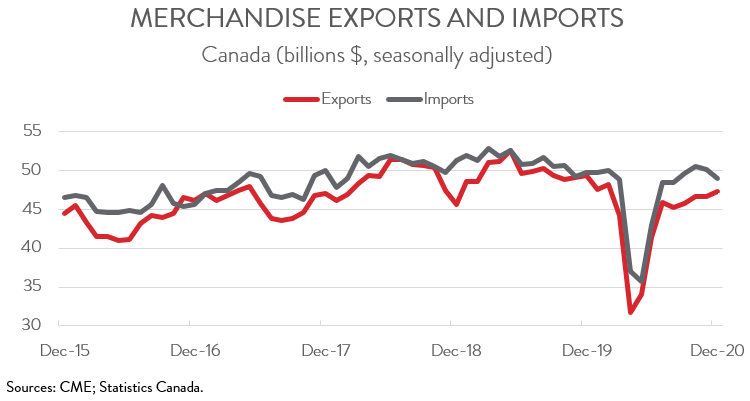 Last year was tough for international trade, especially for Canada’s energy sector. Energy exports plummeted 36.5 per cent, an annual decline similar to the one observed in 2009, while non-energy exports were down 6.5 per cent. Exports also fell at a faster rate than imports. As a result, Canada’s trade deficit more than doubled from $15.4 billion in 2019 to $36.2 billion in 2020. While the next few months will be challenging for the Canadian economy, trade activity should pick up as the year progresses, assuming that vaccines are deployed effectively.

With exports rising and imports falling, the trade deficit narrowed from $3.6 billion in November to $1.7 billion in December, its lowest level since June 2020. Digging deeper, Canada’s trade surplus with the US widened from $2.2 billion to $2.8 billion, while its deficit with the rest of the world narrowed from $5.8 billion to $4.4 billion. 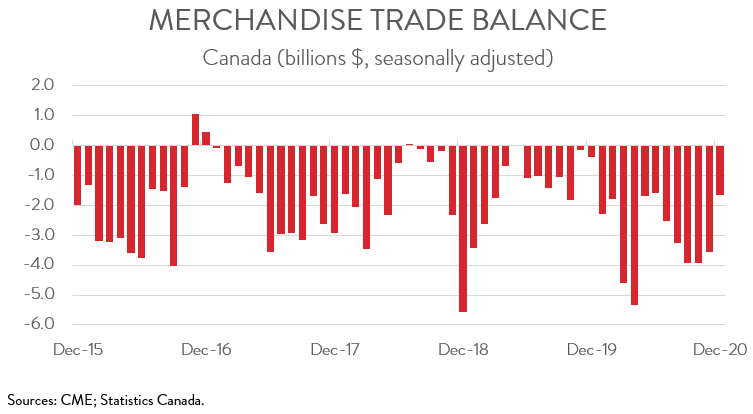 The increase in exports spanned 6 of 11 major commodity groups. The energy sector led the way, with exports rising $691.5 million. Within the energy category, exports of crude oil posted the largest increase, thanks to higher prices. Although energy exports have increased in seven of the last eight months, the sector still has a long road ahead to a full recovery. In December, the value of its exports was still 8.2 per cent below its February level and 23.8 per cent below its year-ago level.

Meanwhile, non-energy exports edged up 0.1 per cent in December. Notable increases were observed in forestry products (+189.8 million) and in aircraft and other transportation equipment and parts (+$135.4 million). These two product categories have experienced vastly different recovery paths. While exports of forestry products were 16.9 per cent above the pre-pandemic level in December, exports of aircraft and other transportation equipment and parts were 35.7 per cent below.

On the negative side, exports of consumer goods fell $155.3 million in December, its fourth decline in five months. Exports were also down in metal ores and non-metallic minerals (-$89.0 million), in chemical, plastic and rubber products (-$57.4 million), and in industrial machinery, equipment and parts (-$52.5 million). 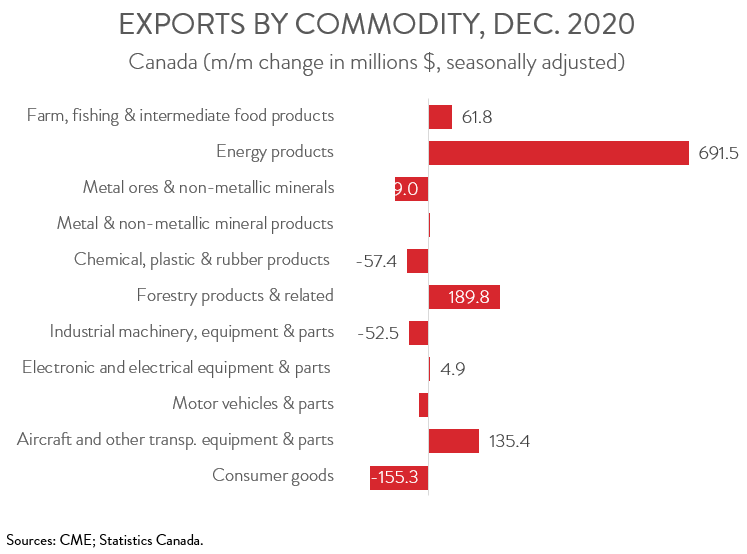 EXPORTS TO THE US RISE, BUT A FULL RECOVERY IS STILL FAR OFF

Exports to the United States increased 1.5 per cent to $33.4 billion in December, while exports to the rest of the world rose for the fourth month in a row, up 1.6 per cent to $13.9 billion. The December figures did nothing to change a key trend that has played out through the pandemic: Canada’s trade activity with the US has recovered much more slowly than that with the rest of the world. In fact, in December, Canadian exports to the US were 7.2 per cent below the pre-pandemic level, while exports to countries other than the US were 13.8 per cent above this benchmark. 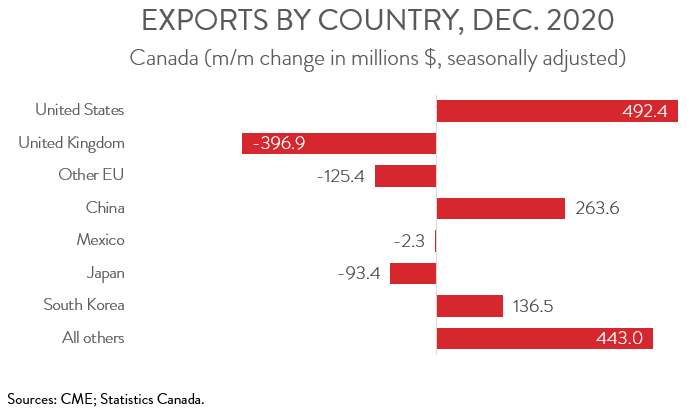