Exports rise in February, but remain stubbornly flat since the summer.

There was some slight upward movement in Canadian exports in February as a sharp decline in crop and precious metals deliveries was not quite enough to offset gains in other product categories. Total exports increased by 0.3 per cent ($164 million) compared to January, reaching $45.9 billion. 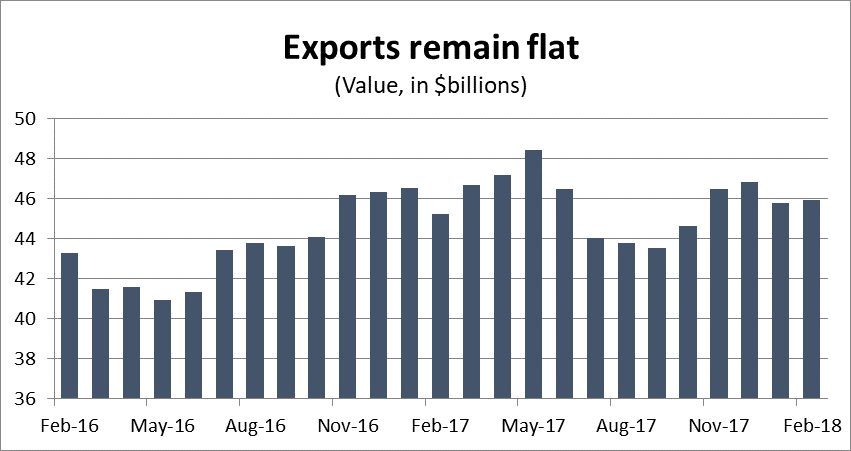 Although February’s trade numbers were modestly positive, there has been little for exporters to cheer about over the past six months or so. Exports have been stuck in the range of $44 billion to $46 billion per month since last summer, and remain well below their recent peak of $48.5 billion set last May. 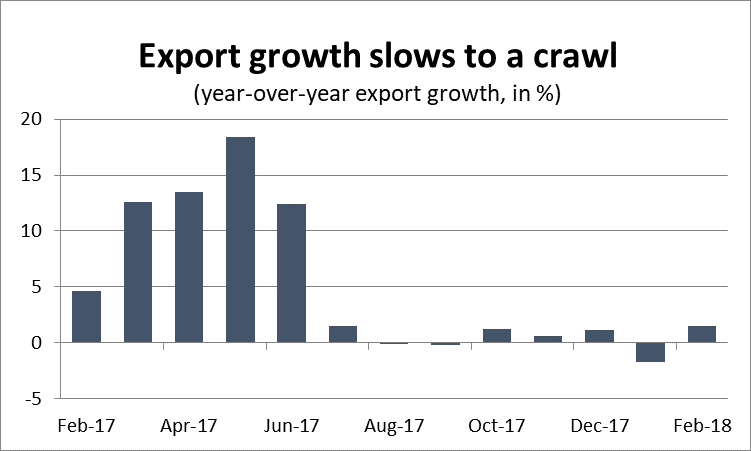 The same trend is also broadly evident for imports coming in to Canada, albeit with more volatility. Imports last month rose by a relatively strong 1.9 per cent ($912 million) to reach $48.6 billion but have been fluctuating in the range of $46 billion to $49 billion since July without any clear positive or negative trend.

Faster import growth in February meant that Canada’s trade deficit widened that month, rising to $2.8 billion compared to $2.1 billion in January. Because both imports and exports have been stuck in a holding pattern since last summer, the same is also true of the trade balance; broadly speaking, Canada has been consistently posting a trade deficit in the range of $2 billion to $3.5 billion per month since July. 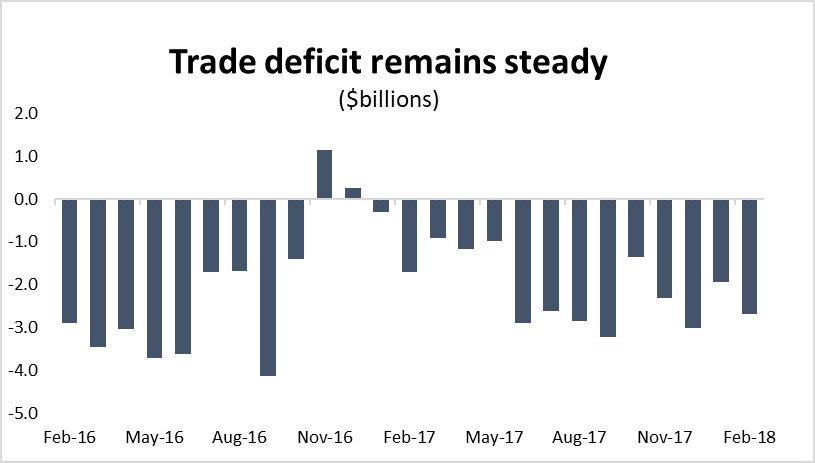 The good news for Canadian exporters is that February’s modest gains were driven by an increase in sales volumes. While average prices fell by 0.1 per cent, the total volume of goods delivered to foreign buyers rose by 0.6 per cent compared to January. 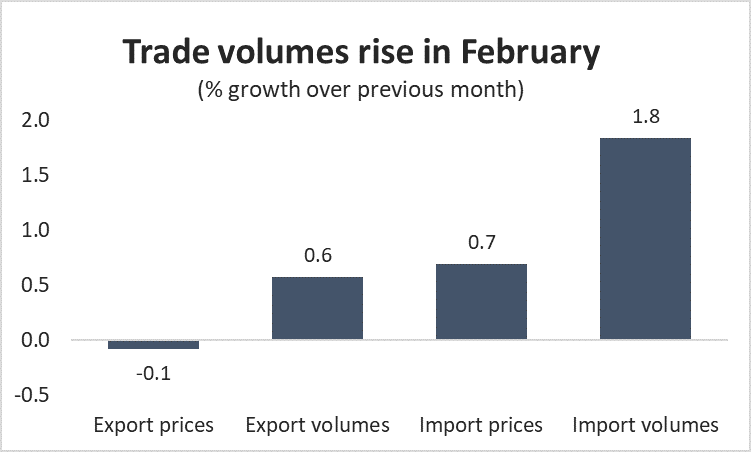 Volume effects also drove import growth, although the impact was bolstered by higher prices as well. The quantity of goods imported into Canada rose by 1.8 per cent in February, while prices for those goods was up 0.7 per cent. In both cases, those increases partially offset steep declines in January.

Looking at specific product categories, February was a good month for most exporters of industrial and consumer goods, while it was less positive for resource-based exporters. Leading the way on the positive side, there was a solid increase in deliveries of motor vehicles and parts, exports of which rose by nearly 5.0 per cent compared to January. The aerospace sector also made strong gains in February, as exports of those goods jumped by 19.6 per cent. In both cases, however, those increases simply represent the partial recovery of steep losses in January. 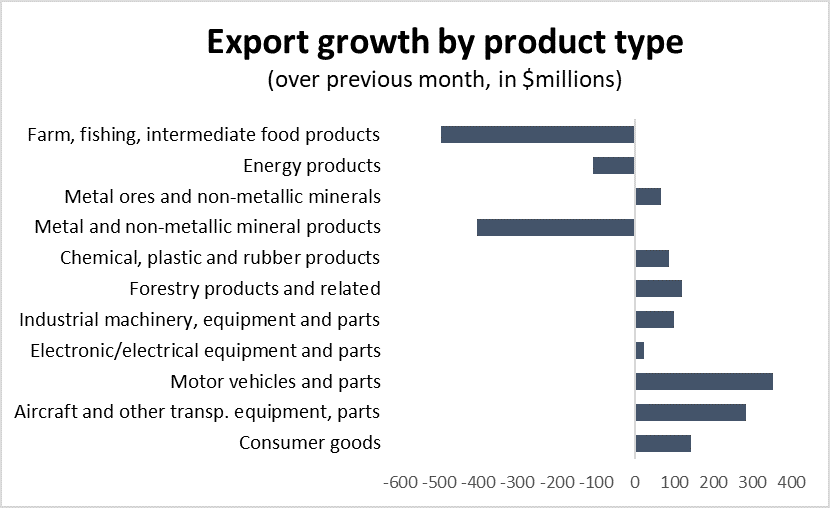 While exports were up in eight of the eleven broad product categories, abrupt declines in two of the remaining three took the wind out of the sails of the export sector generally. Crop deliveries were sharply lower in February as a rail backlog prevented prairie farmers from getting their goods to market. Both wheat and canola exports were down by about 41 per cent compared to January. Meanwhile, precious metals exports dropped 34 per cent on a sharp decline in sales volumes.

In terms of specific export markets, February was a month of widely divergent results depending on the country. There was solid growth in exports to the United States, which rose by 1.9 per cent ($662 million). Meanwhile, shipments to Brazil more than doubled (up $207 million), and sales to the EU (not including the United Kingdom) were up by nearly 18 per cent ($361 million). 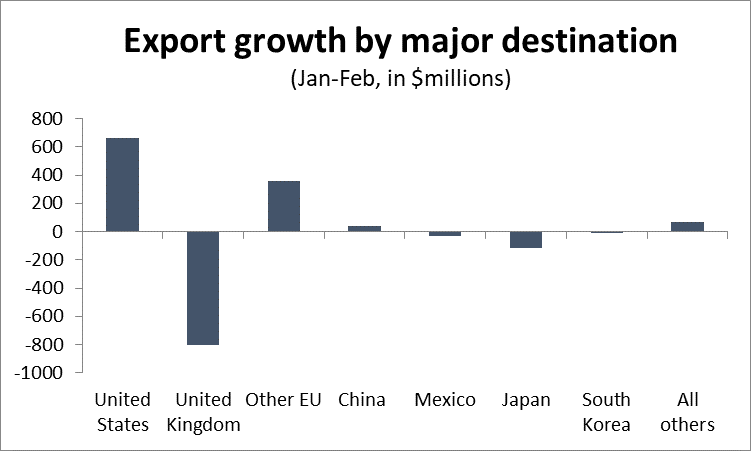 At the other end of the spectrum, exports to the UK were down sharply, declining by more than 41 per cent ($805 million). The UK is the primary market for Canada’s gold exporters. Shipments to Japan were also sharply lower in February (down 10.6 per cent, or $114 million).

On the import side, the 1.9 per cent increase in February was largely driven by a spike in energy imports. Crude oil, refined petroleum and natural gas imports were all up, pushing overall energy imports up more than 15 per cent compared to January. Energy products accounted for nearly half of all import growth that month. Outside of energy, imports of most consumer and industrial goods were up in February, while imports of metals, minerals and associated products were lower. 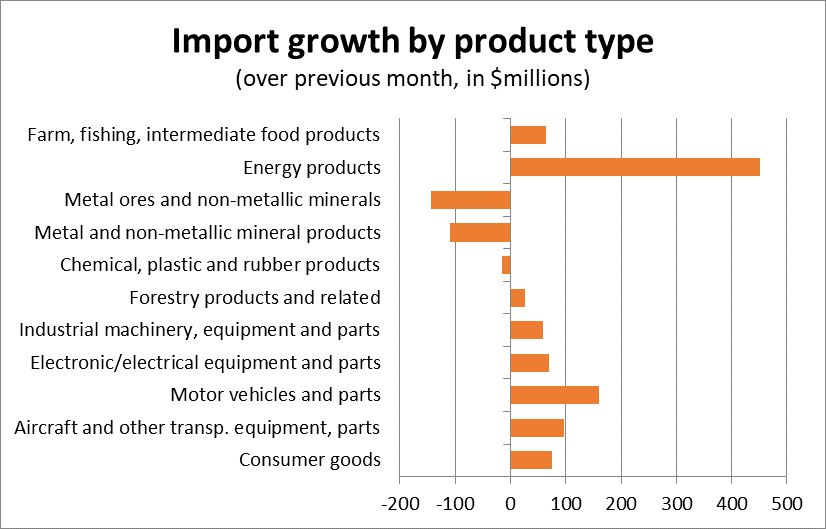