Donald Trump’s 25 per cent tariff had a devastating impact on Canadian steel trade in June, but strong growth in other resource-based and industrial goods drove overall exports to new all-time monthly high. Total exports rose by a healthy 4.1 per cent compared to May – the best growth rate Canada has seen in two years. As a result, monthly exports crossed the $50-billion threshold for the first time ever, coming in at an estimated $50.7 billion. 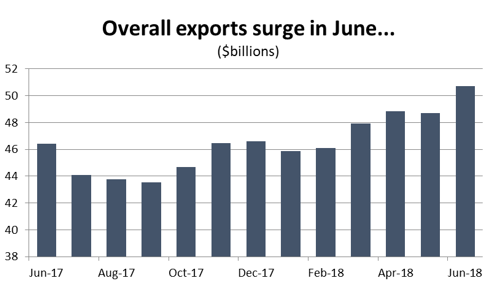 Those gains come despite a sharp drop in steel exports – a direct result of US tariffs which came into effect that month. Exports of intermediate steel products dropped by nearly 24 per cent in June, falling from $915 million to about $699 million. 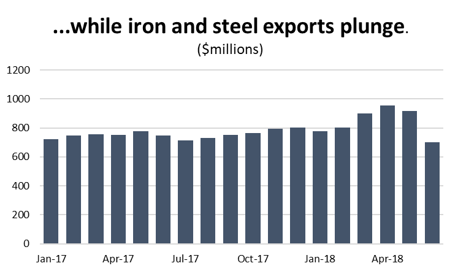 Interestingly, the 10 per cent tariff imposed on Canadian aluminum exports did not have an immediate effect on that industry. Intermediate aluminum product exports were up 3.1 per cent in June, rising to $951 million – their highest level since April 2017. No one should interpret this as evidence that aluminum producers are unaffected, however. The increase may have been because of pre-existing supply contract commitments, or because of higher exports to non-US destinations. The true picture of the impact on aluminum exports will become clearer in the months ahead.

Turning back to June’s trade numbers, imports into Canada were down slightly compared to May, falling by about 0.2 per cent (to $51.3 billion). The combination of sharply higher exports and flat imports took a big bite out of Canada’s trade deficit in June. It fell from $2.7 billion in May to about $600 million in June – its lowest level since January 2017. 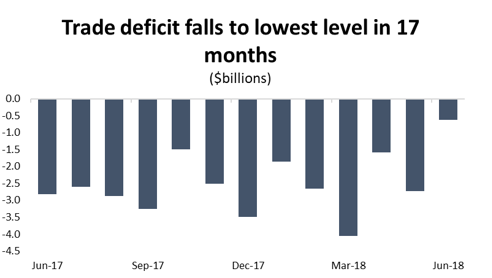 Canada’s export strength in June was driven by a combination of higher trade volumes and businesses receiving better prices for their goods. Export volumes were up 2.0 per cent in June, while prices were, on average, about 1.8 per cent higher. On the import side, Canadians purchased fewer foreign goods but paid more for them. Import volumes fell by 1.3 per cent compared to May, while average prices for those goods were 2.2 per cent higher. 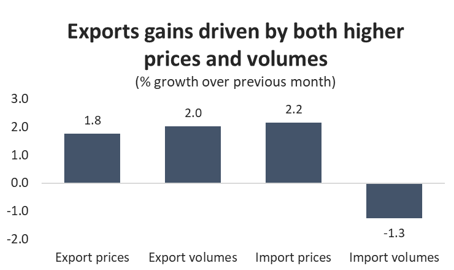 In terms of export products, Canada’s trade gains in June were relatively widespread with increases in eight of the 11 broad product categories. The biggest gains were in the energy sector. Driven by increased deliveries of crude oil and refined petroleum, energy exports jumped by $654 million in June (a 7.1 per cent increase over May) to hit their highest level since October 2014. In fact, a familiar story is emerging in Canadian exports – strong growth in oil exports overcoming flat sales in other industries. Since January 2016, crude oil and refined petroleum exports have risen by more than 87 per cent, while exports of all other products are just 3.9 per cent higher. 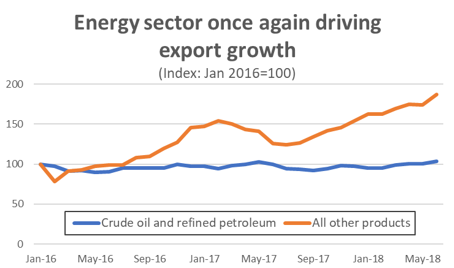 In addition to energy, there was also a sharp increase in raw metals and minerals exports in June. Higher shipments of iron, copper, potash and diamonds all contributed to a 22.9 per cent increase ($313 million) compared to May. 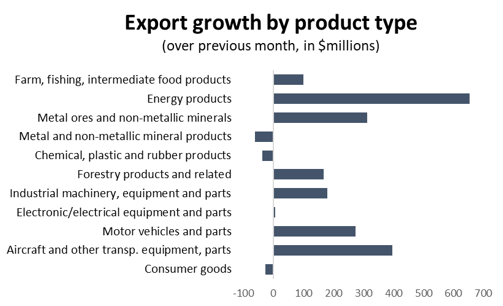 Industrial goods exports were higher as well. Aerospace exports rose by $397 million, while motor vehicles and parts deliveries were up by $274 million. Foreign sales of industrial machinery also grew, posting am increase of $180 million.

As noted earlier, steel exports were down considerably in June. Pharmaceutical exports drove declines in consumer goods exports, while sales of fertilizers and petroleum-based chemicals were also lower.

On a dollar-value basis, most of Canada’s export gains in June were driven by higher sales to the United States. Southbound exports rose by $893 million compared to May – their fourth increase in the last five months. Canada also made export gains in a number of other markets that month, led by Germany ($153 million), India ($147 million), Belgium ($136 million) and Mexico ($123 million). Those gains were partially offset by lower exports to Hong Kong (down $250 million), Brazil ($139 million) and China ($102 million). In the cases of Hong Kong and Brazil, however, those declines represented the return to more normal export levels following unusual spikes in May. 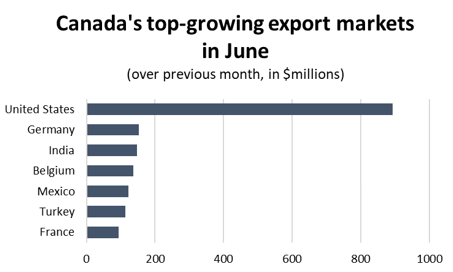 Looking at imports into Canada, the flat overall performance was the result of large declines in two product categories offsetting widespread but smaller increases elsewhere. Energy imports into Canada plunged by $510 million in June – a decline of more than 15 per cent compared to May. Similarly, aerospace imports dropped by $420 million (17.1 per cent). The biggest gains on the import side came in purchases of raw metals and minerals, as well as industrial machinery and consumer goods. 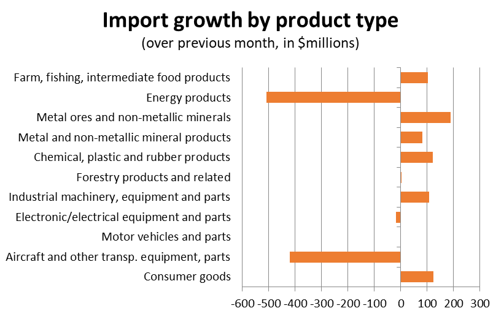 Canadians bought more North American-made products in June. Imports from the United States and Mexico were up by $108 million and $104 million, respectively. Those gains were countered by a steep decline in imports from China (down $215 million). Imports from the UK, Germany and France were also lower compared to May. 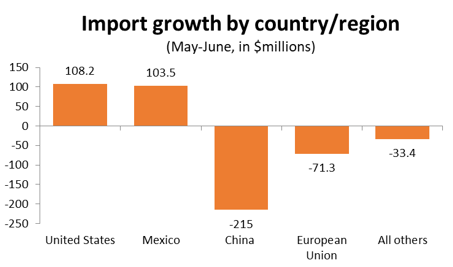