Canadian Economy Stalled in February Prior to Lockdown

REAL GDP UNCHANGED IN FEBRUARY PRIOR TO MARCH TUMBLE

Canadian economic growth was essentially flat in February, the last monthly GDP reading before everything changed. On a year-over-year basis, real GDP growth came in at 2.1 per cent, up from 1.9 per cent in January. 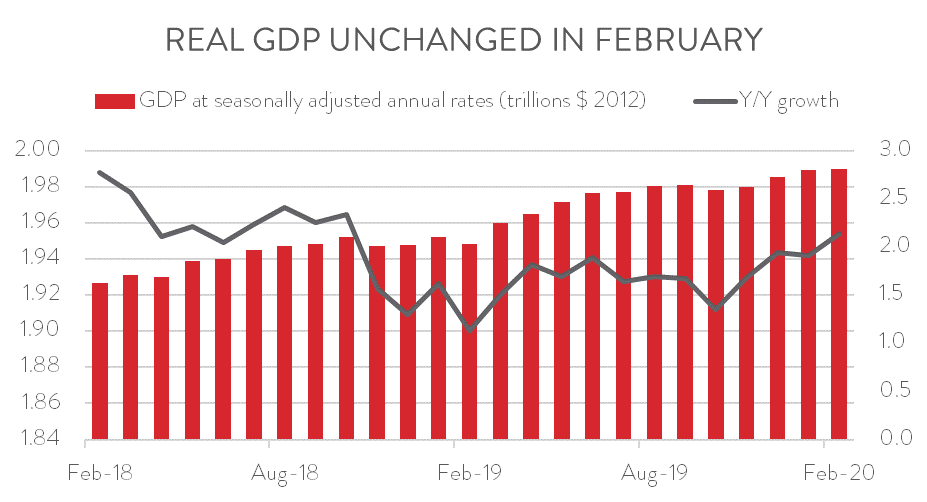 We already know that the economy has deteriorated sharply since February, as large segments were shutdown in March to contain COVID-19. Indeed, flash estimates published earlier from Statistics Canada suggest that the economy shrank by 9 per cent in March and by 2.6 per cent in the first quarter. The second quarter drop will be historic.

EDUCATIONAL SERVICES AND TRANSPORTATION AND WAREHOUSING BOTH HIT BY DISRUPTIONS

Educational services output fell by 1.8 per cent in February, its worst performance since June 2014, as rotating strikes by elementary and secondary school teachers in Ontario intensified. At the same time, transportation and warehousing output contracted by 1.1 per cent, its third decline in four months. Among its subsectors, rail transportation tumbled by 5.1 per cent, weighed down by the CN rail blockades and a train derailment near Saskatoon. Air transportation also fell steeply, as airlines extended flight cancellations between Canada and China, the original epicentre of the coronavirus. 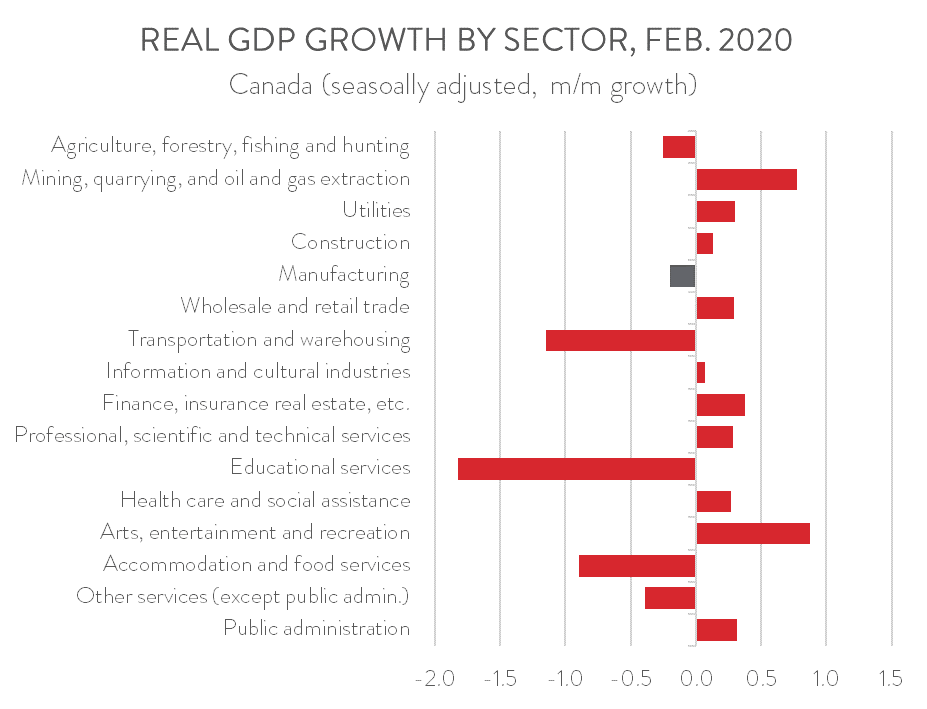 The picture was brighter if those two industries were factored out. In fact, the rest of the economy expanded by a decent 0.2 per cent, as 10 of the 14 remaining major industries posted gains. Output in mining and oil and gas extraction climbed by 0.8 per cent, its third consecutive increase. As well, arts, entertainment and recreation output increased by 0.9 per cent, more than offsetting a 0.7 per cent decline in January. Meanwhile, finance, insurance and real estate output posed a 0.4 per cent gain, attributable to a hefty increase in real estate activity.

Manufacturing output edged down by 0.2 per cent in February, giving back some of the sharp gains from the previous month. Compared to the same month one year ago, output was down 0.9 per cent. This marks the sixth consecutive month that manufacturing output has declined on a year-over-year basis. Unfortunately, further declines are in the cards as the industry grapples with multiple coronavirus-related headwinds, despite the fact manufacturers have been called upon to play a vital role in the fight against COVID-19. CME continues to work closely with all levels of government to help the industry get through the crisis and assure its subsequent recovery. 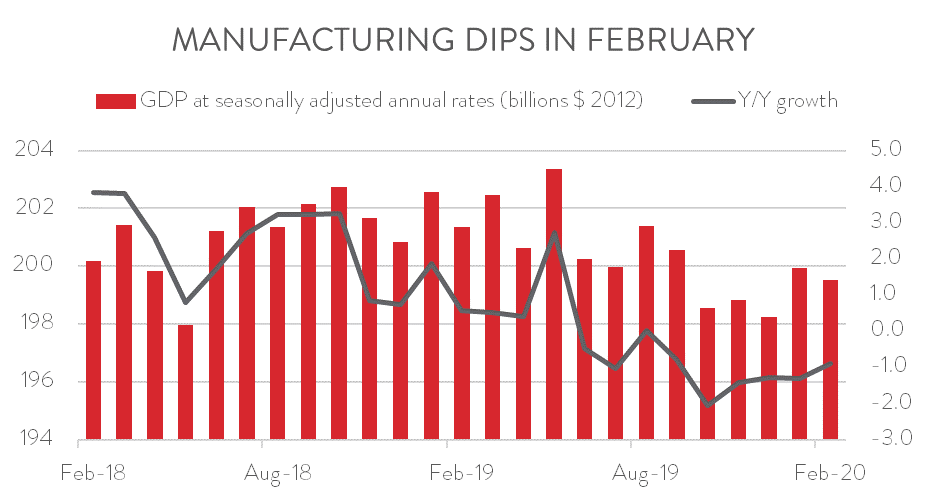 Output fell in 6 of 11 major manufacturing subsectors in February. As noted by Statistics Canada, the poor performance of some subsectors could be pinned on the rail blockades, which hindered the delivery of both raw materials and final products. Machinery (-4.2 per cent) and chemicals (-3.9 per cent) experienced the largest declines.

On the positive side, the biggest gains were recorded in fabricated metals (4.8 per cent) and motor and vehicle and parts (4.0 per cent), the latter’s first gain in three months. The rebound in motor vehicle and parts was due to the resumption of production at some assembly plants that were idled by extended shutdowns in January. Unfortunately, flash estimates from Statistics Canada imply that motor vehicle production tumbled by 33 per cent in March, and an even steeper decline is in the cards for April. 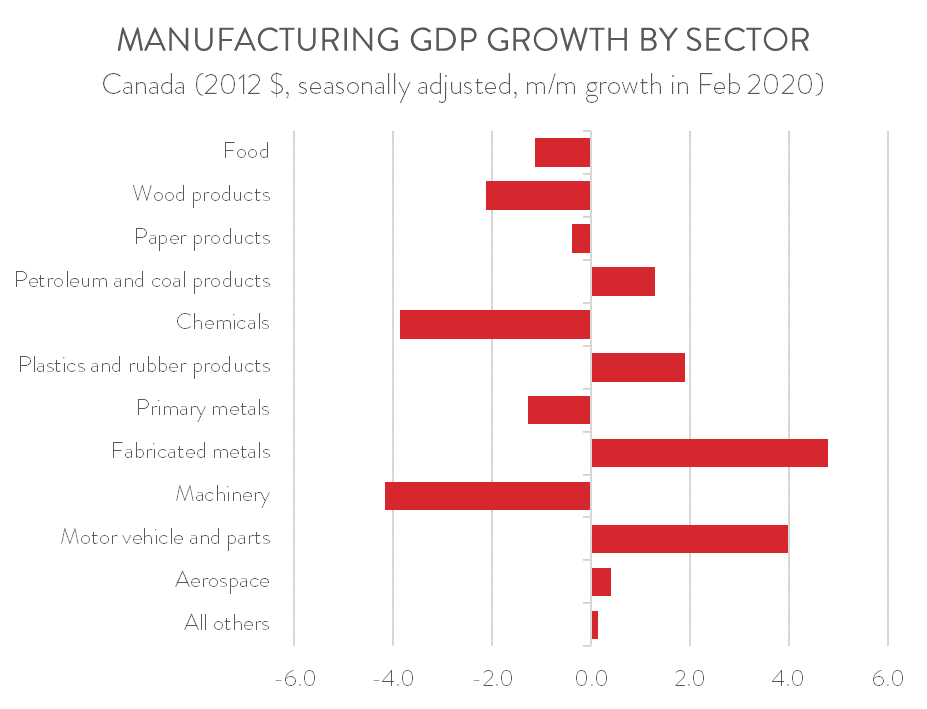