Exports went into a full-scale retreat in June. After a strong showing in May, international sales were down to in nearly every major product category and to almost all of Canada’s principal export destinations.

All told, exports fell by 5.1 per cent, more than enough to wipe out all the gains made in May. The value of goods shipped abroad fell from a record $53.0 billion to $50.3 billion, bringing total monthly exports back in line with levels seen in the late winter and early spring. 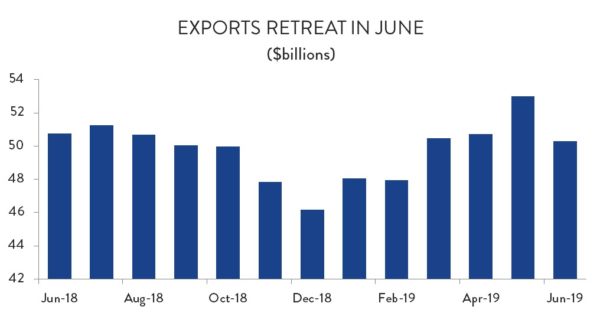 With data now available for the first six months of the year, 2019 is shaping up to be a weak year for Canadian exporters. Exports are tracking just 3.9 per cent higher compared to the same period last year.

The story on the import side wasn’t much different. Imports were down 4.3 per cent in June, with lower purchases of nearly all major product categories from nearly all major import sources. As a result, Canada’s small trade surplus in May shrunk to essentially a rounding error in June – about $136 million. 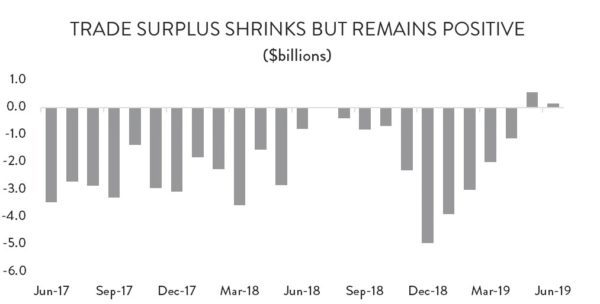 June truly was a month of almost suspiciously cross-the-board declines. The drop in exports was the result of both price and volume effects. Export volumes fell by 1.5 per cent, weakened further by a 2.6 per cent decline in the average prices that exporters received for their goods. 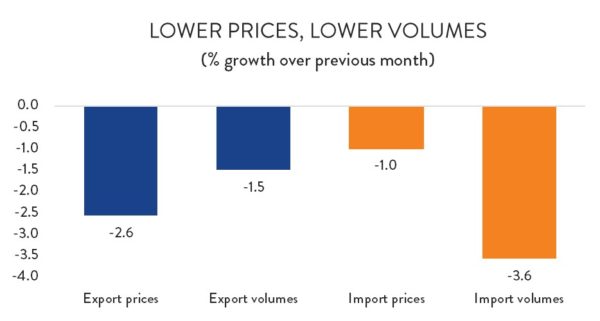 The story was much the same on the import side, only with a larger decline in trade volumes. They physical quantity of goods imported into Canada dropped by 3.6 per cent compared to May, while average prices were lower by about 1.0 per cent.

Widespread means widespread. Ten of the 11 headline product categories saw lower exports in June. The only exception was farm, fishing and intermediate food products. Buoyed by unfinished food products and some gains in seafood and crops, exports of those goods were up by 2.4 per cent, marking the fourth consecutive month of export gains. 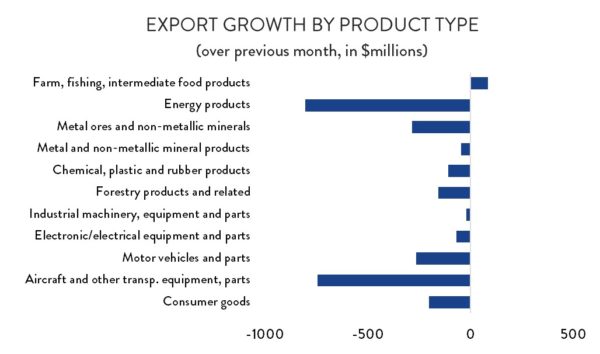 Elsewhere, it was all bad news. On a dollar-value basis, the largest decline was in energy exports, which fell by $804 million (7.4 per cent) compared to May. A close second was the aerospace sector, where deliveries were $744 million lower. However, since the value of aerospace exports is just a fraction of oil, gas and other energy products, that $744 million translates into a 25 per cent drop.

Canada did make export gains in one important market in June: The United Kingdom. Exports to that country were $296 million higher compared, which represents a partial rebound from a sharp drop in May. There were also modest increases in sales to a few of Canada’s smaller trading partners: Algeria, Indonesia, Peru and Spain. 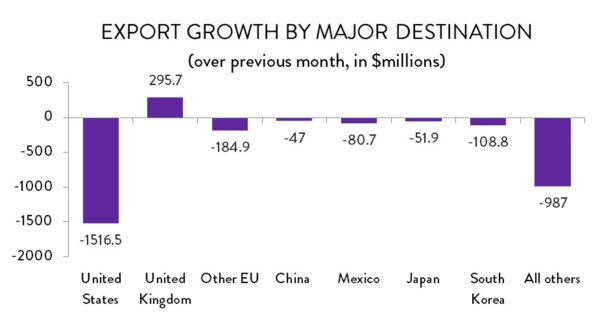 Aside from the UK, exports to all of Canada’s other major detinations were lower in June. The largest decrease was to the United States, where cross-border deliveries fell by $1.5 billion (3.0 per cent), wiping out all the gains made the previous month. On a dollar-value basis, there were also sharp declines in exports to Hong Kong ($432 million), Saudi Arabia ($269 million) and Turkey ($130 million).

The story wasn’t a lot different on the import side. Imports were down in all but two major product category – in this case, farm, fishing and unfinished food products; as well as metal and mineral products. 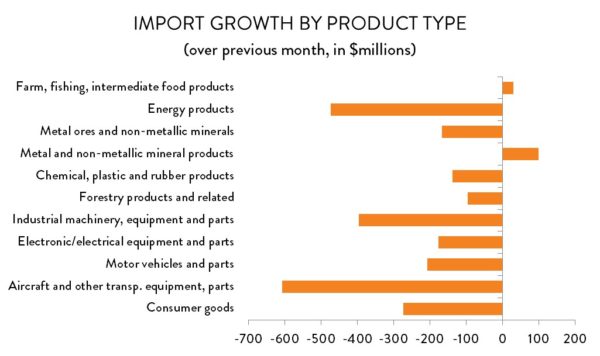 For the second month in a row, Canadians bought fewer goods from the United States. Imports from south of the border fell by 3.8 per cent in June – a decline of close to $1.3 billion. Imports from the US are now at their lowest monthly level since January 2018. There were also widespread declines in imports from the EU in June. Led by a steep drop in purchases of German goods, EU-sourced imports fell by $702 million compared to May – a decline of 12.2 per cent.

Meanwhile, June saw a modest increase in imports from Asia. Imports from China, Japan and South Korea were all slightly higher than they were in June.