Overall Employment Down for Second Straight Month; Manufacturing Sees Steepest Fall in Over a Year

EMPLOYMENT FALLS A FURTHER 68,000 IN MAY

Employment fell by 68,000 (-0.4%) in May, adding to the 207,100 job losses in April, as Canada’s labour market continued to be hit by the third wave of COVID-19. The decline in May left employment 571,100 or 3.0% below the pre-pandemic level. In addition to the decline in employment, the number of employed people working less than half their usual hours increased for a second straight month. 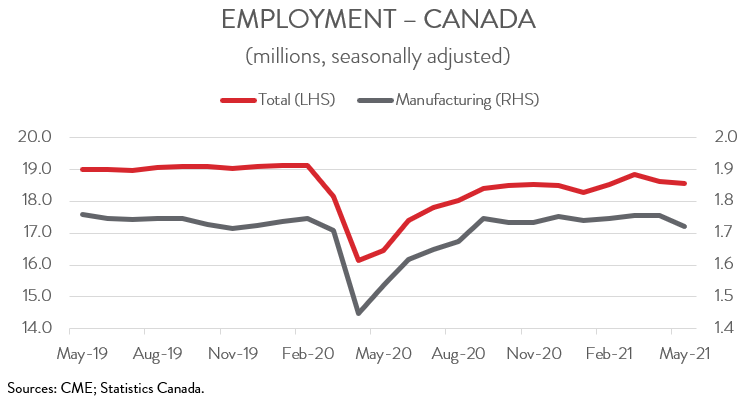 The Labour Force Survey (LFS) was conducted during the week of May 9 to 15, a time when many provinces were maintaining or increasing public health measures. But with COVID-19 cases steadily declining and vaccination rates quickly going up, provinces are gradually lifting restrictions, making it safe to pencil in a strong labour market rebound for June. That said, the emergence of the highly transmissible Delta variant could slow down reopening plans, presenting a downside risk to the near-term outlook. It is still a race between vaccines and variants.

The decline in employment was widespread, spanning 11 of 16 major industries. Manufacturing was the biggest contributor to the decline. Manufacturers shed 35,900 workers in May, the steepest fall since April 2020. As noted by Statistics Canada, while the industry had fully recouped all its COVID-19 job losses by September 2020, there has been little growth since, and employment continues to hover around February 2020 levels.

After falling by 12,700 in April, employment in construction decreased a further 15,800 in May, driven by declines in Ontario, where public health restrictions affecting non-essential construction were introduced in mid-April. These recent losses left employment in the sector 3.7% below the pre-pandemic level. 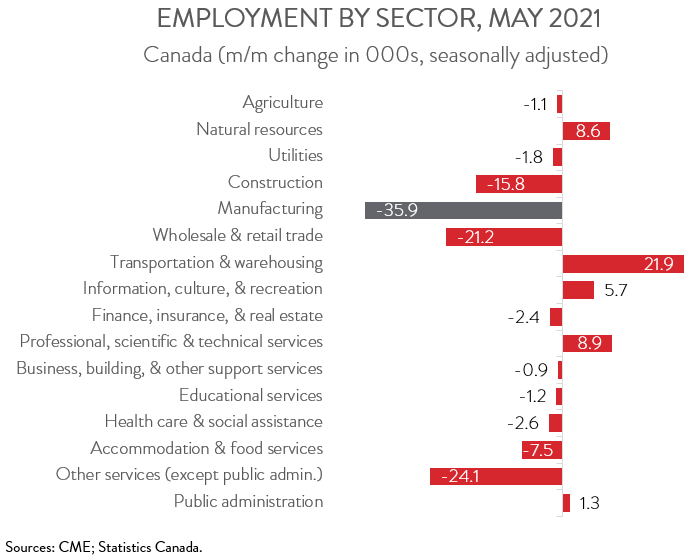 The retail trade sector had another tough month, as tightening public health restrictions continued to affect stores selling non-essential goods. Employment fell by 29,000 in May, adding to a decline of 84,000 in April. As of May, employment in retail trade was 6.2% below the pre-pandemic level.

Along with retail trade, other industries most affected by physical distancing measures also experienced job losses in May. Employment in other services was down 24,100, the third consecutive monthly decline. This sector includes personal care services, such as barber shops and beauty salons, as well as civic and religious organizations.

At the same time, employment in accommodation and food services fell by 7,500, adding to the 59,200 jobs lost in April. As noted by Statistics Canada, employment in the industry was 29.8% or 364,000 below the pre-pandemic level in May, accounting for nearly two-thirds of the overall employment decline since February 2020.

On the positive side of the ledger, the transportation and warehousing sector added 21,900 workers to payrolls in May, its first increase in three months. In addition, employment in natural resources rose by 8,600. This sector boasts the strongest post-COVID recovery, with employment 9.3% above February 2020 levels.

The unemployment rate inched up from 8.1% in April to 8.2% in May, the second straight monthly increase. In contrast, the jobless rate in the manufacturing sector declined from 5.1% to 4.9% over the same period, the first sub-5.0% reading since September 2020. 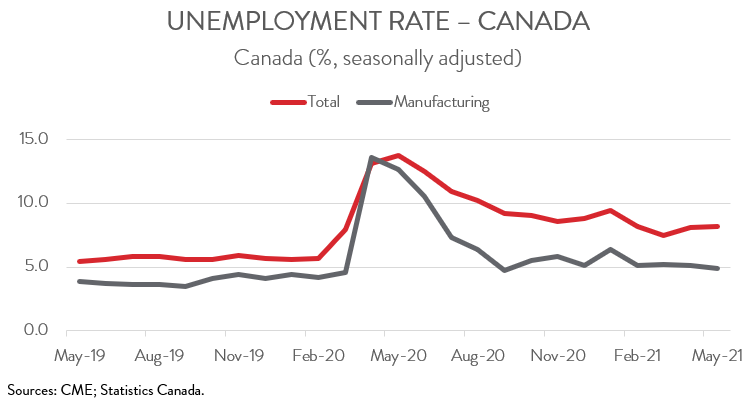 The drop in employment spanned 8 of 10 provinces, with Ontario and Nova Scotia posting the largest declines. After plunging by 152,700 in April, employment in Ontario fell a further 31,600 in May, as stringent public health measures remained in place. Meanwhile, Nova Scotia entered a lockdown at the end of April, closing non-essential retail stores and moving schools online. As a result, employment fell by 22,200 in May, the largest decline since April 2020.

Saskatchewan was the only province to post significant job growth in May, with employment up 4,100, building on gains of 9,500 in April. PEI also posted employment growth in April, but the gains were limited to just 300 new jobs.

In the manufacturing sector, the drop in employment was concentrated in Ontario (-14,300) and Quebec (-13,600). With this decline, Ontario’s manufacturers have reduced payrolls for three straight months, while Quebec’s manufacturing firms have slashed jobs for two months in a row. Five other provinces also shed factory workers in May, including BC (-3,800) and New Brunswick (-2,700). Alberta and Saskatchewan were the only two provinces to post job growth in the manufacturing sector in May, but the gains were limited to just 800 new jobs each. 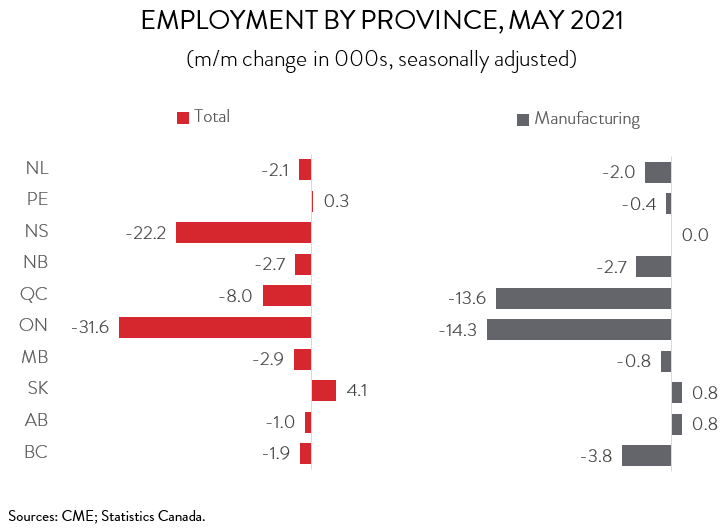