MERCHANDISE EXPORTS UP FOR THIRD MONTH IN A ROW

Canadian merchandise exports increased 0.8% to $54.4 billion in August, building on the cumulative 8.6% increase in June and July. On the other hand, merchandise imports fell 1.4% to $52.5 billion, though they remained near July’s record high. In volume terms, the picture was even more encouraging: real exports were up 2.3%, while real imports were down 3.2%. 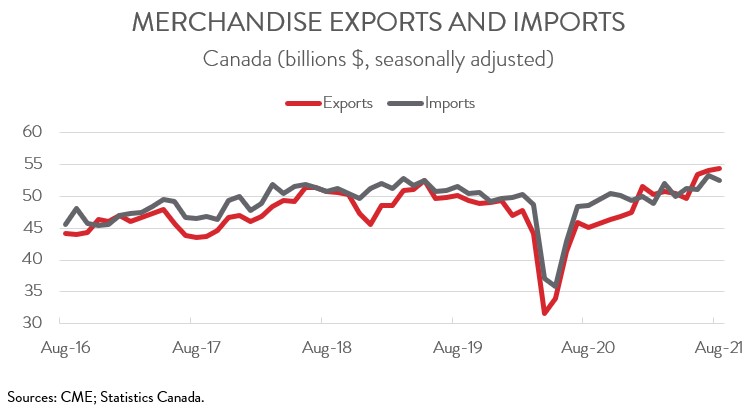 The increase in real exports in August makes it likely that trade will add to GDP growth in the third quarter after weighing it down in Q2. The positive momentum is expected to continue in the coming months, but the recovery will likely be bumpy due to ongoing supply chain challenges as well as other economic effects of the COVID-19 pandemic. Recently, these supply chain disruptions have been exacerbated by energy supply shortages in several regions. 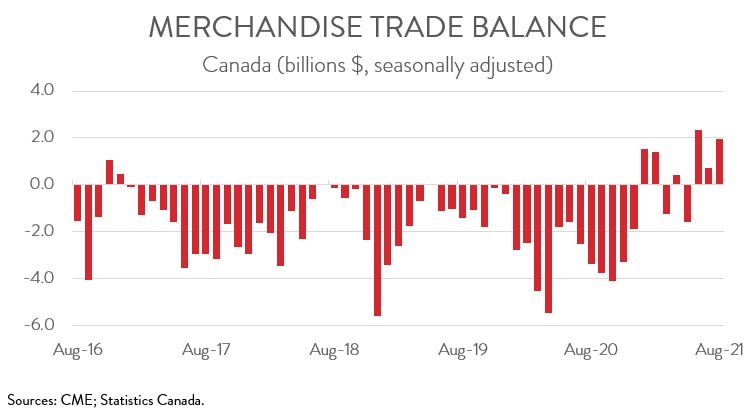 The increase in exports spanned 6 of 11 major commodity groups. Exports of energy products increased 5.1% in August to $12.0 billion, the highest level since March 2014. Exports of crude oil were up for the fourth month in a row, attributable to increased volumes. Coal exports also contributed to the monthly increase, thanks to the combined effect of higher prices and higher volumes. Finally, exports of natural gas posted a double-digit increase, helped by the fact that natural gas prices have risen each month since April.

Exports of metal and non-metallic mineral products rose 4.0% in August to a record $6.9 billion. Higher export values of copper, iron and steel, and aluminum products accounted for more than three-quarters of this gain.

In more good news, exports of aircraft and other transportation equipment were up 9.2% to $2.2 billion, extending the 8.5% gain seen in July. 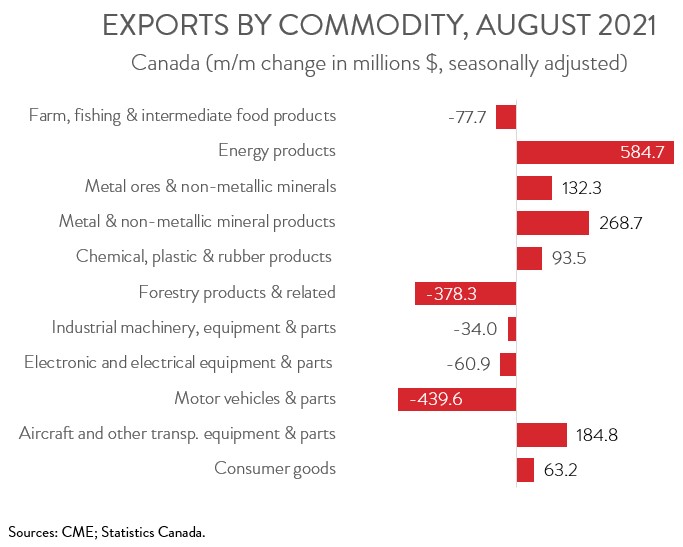 On the downside, exports of motor vehicles and parts declined 7.3% in August to $5.6 billion, more than offsetting the 6.1% increase in July. Parts supply issues, especially of semiconductors, continues to force Canadian motor vehicle manufacturers to limit production. (It should also be noted that the decline in overall imports was predominately driven by motor vehicles and parts.)

Exports of forestry products and building and packaging materials also had a tough month, falling 7.9% to $4.4 billion. The decline was mainly attributable to lower exports of lumber and other sawmill products, which fell for the second consecutive month on lower prices. 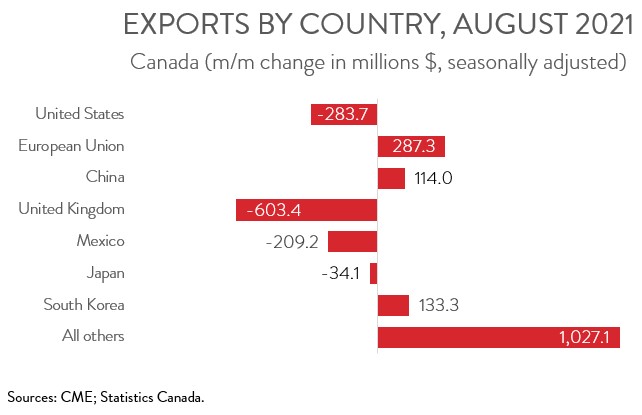