In what is now becoming a familiar theme, Canadian exports plunged in December as weak crude oil prices drove overall export values down for the fifth consecutive month. Exports ended the year at their lowest level since February. 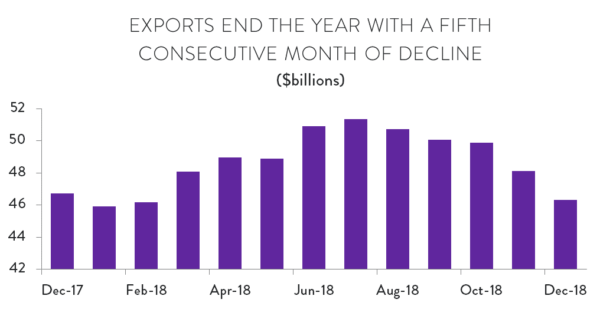 cent in December. That drop represented the largest month-over-month decline since July 2017 and dragged the total value of exports down to $46.3 billion. For their part, imports broke their streak of six consecutive months of decline in December, rising by about 1.6 per cent to reach $50.9 billion. 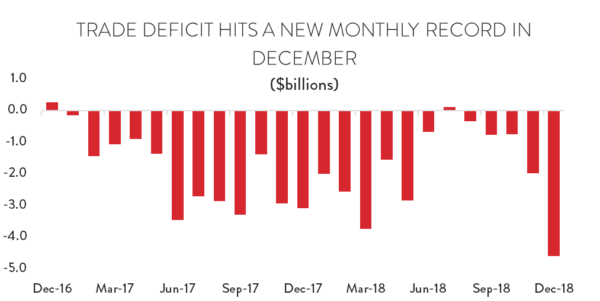 Higher imports combined with plummeting exports caused Canada’s trade deficit to explode in December. Revised data suggest that the value of imports exceeded the value of exports by about $2.0 in November. That figure expanded to $4.6 billion in December – a new all-time monthly high.

The release of December’s trade data was delayed because of the US government shutdown earlier this year (the two countries share import statistics with one another to increase overall data accuracy). However, with preliminary numbers now available, so too is the first look at trade totals for 2018.

Overall, exports were up by an estimated 6.5 per cent last year, building on a 5.4 per cent increase in 2017. Last year’s growth – which took place entirely in the first half of 2018 – propelled overall exports to a new nominal-dollar record high of $585 billion, up from $549 billion the previous year. 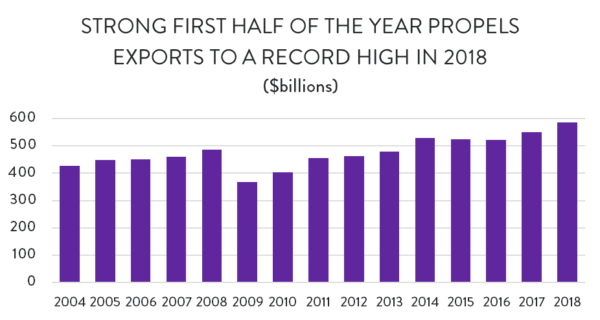 As a result, in spite of December’s record monthly trade deficit, the trade imbalance for the year as a whole actually fell slightly. Canada’s trade deficit in 2018 came in at an estimated $21.7 billion – down from $24.6 billion in 2017.

December’s decline in exports was driven by a combination of price and volume effects. Average export prices fell by 2.4 per cent compared to November, while export volumes were down by 1.5 per cent.

The silver lining here is that those effects were heavily concentrated in the energy sector. Prices for energy exports were down 19 per cent compared to November, driven by a staggering 29 per cent decline in crude oil prices. Aside from some associated weakness in basic chemicals prices, most other exporters saw a slight uptick in prices to end the year. 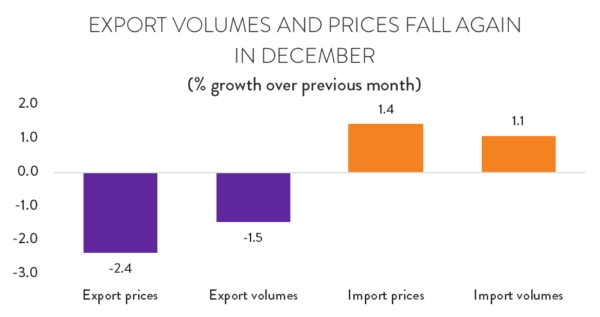 On the export volume side, the results were slightly more mixed. Crude oil trade volumes fell by 3.9 per cent, but there were also substantial declines in metals and mineral products, as well as consumer goods.

For its part, the increase in imports into Canada was the result of both higher trade volumes and Canadians paying more for foreign goods. Import prices were up 1.4 per cent compared to November, while trade volumes increased by 1.1 per cent.

Energy products were by far the biggest driver of the decline in exports in December. Energy exports fell by nearly 22 per cent for the month – a decline valued at close to $1.8 billion. However, the results elsewhere were decidedly mixed. Of the 11 major product categories, five were lower, four higher and two essentially unchanged. 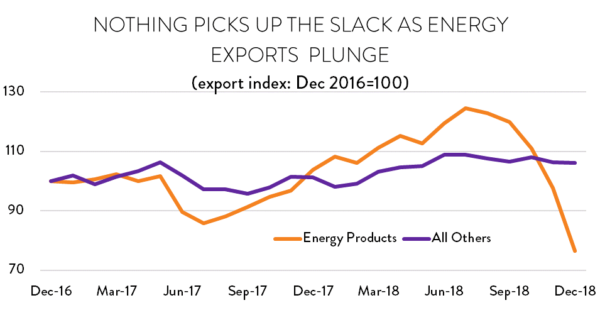 On the positive side, aerospace product exports jumped by 16 per cent ($334 million), while deliveries of raw metals and minerals were 9.9 per cent higher ($173 million). Exports of forest and farm products were also up compared to November. Meanwhile, exports of products derived from metals and minerals were down 9.8 per cent ($531 million), while shipments of industrial machinery, motor vehicles and parts, and consumer goods were all lower as well. 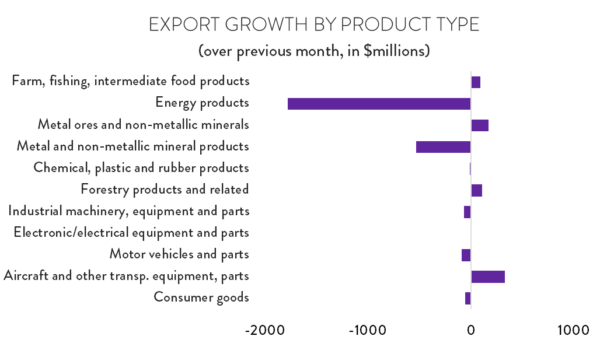 As was the case in November, given that Canada’s energy exporters are effectively captive to the US market, the decline in crude oil shipments meant that exports to the US were sharply lower in December. Exports to that country fell for the fifth consecutive month, dropping by 3.6 per cent (nearly $1.3 billion). US-bound exports are now 12 per cent below their July peak and, at $33.7 billion, sit at their lowest level since October 2017. 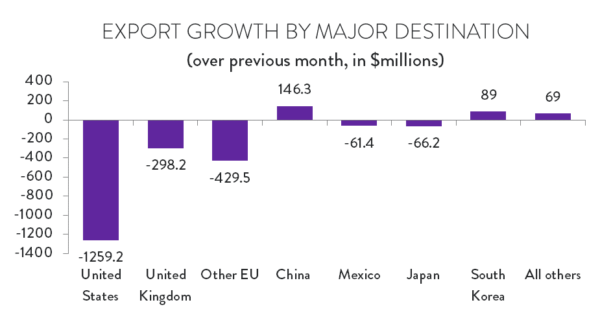 Outside of the US, the story wasn’t much better. Exports to EU markets plunged in December, led by a 42 per cent drop in sales to Italy. There were also double-digit declines in exports to the UK, Netherlands, Germany, Spain and Belgium. Outside of the EU, exports to Mexico and Japan were also lower in December.

On the positive side, there was healthy growth in exports to a number of Asian markets. Sales to China were 5.5 per cent higher, while there were strong increases in sales to South Korea, India, Saudi Arabia and Indonesia as well.

On the import side, results were mixed as Canadian purchases were up in six of the 11 major product categories and down in the remaining five.

Leading the way was a spike in imports of raw metals and minerals, which were up 33 per cent ($351 million) compared to November. Energy imports were also significantly higher (up 20 per cent, or $539 million) as Canadians bought more foreign crude oil and natural gas. There were also notable increases in imports of motor vehicles and parts, as well as consumer goods. 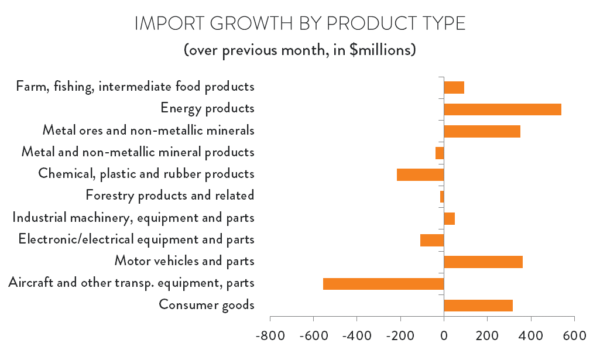 On the other hand, imports of aerospace products fell back after a spike in deliveries in November, while purchases of basic and industrial chemicals were also lower in December.

December’s increase in imports came entirely from non-US destinations. Imports from the US fell for the second month in a row, dropping by about 2.4 per cent compared to November – a decline of about $793 million.

Meanwhile, Canadians bought more goods from the European Union (up 6.1 per cent, or $310 million), with especially strong increases in goods flowing in from the Netherlands and Italy. Imports from Brazil were also sharply higher in December, up 56 per cent ($206 million). There were also solid increases in imports from China, South Korea and India.