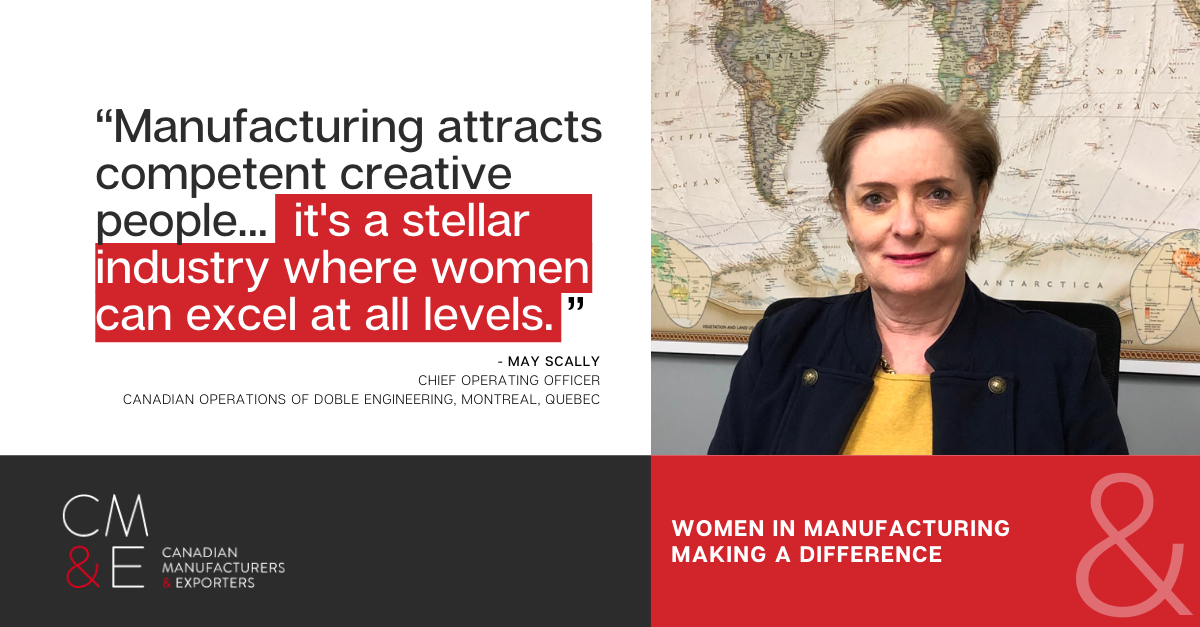 Experience in the manufacturing sector:

Scally coaches and mentors, young men, and women – and she leads by example. Over her career, she has done what some women are hesitant to do. Scally advocates for herself. In her early 40s, for example, she made the difficult decision to step away from a very senior, and high paying job, for a better quality of life. “Here is a cliff and I am going to jump off of it,” she said to herself at the time. It was the right choice.

Scally says that at that time she had two children at home and was able to achieve that balance in life. Taking that risk paid off as she found her way to a position that was interesting, challenging and allowed her a life outside of the office.

How she does it:

There are very few women at Scally’s level in manufacturing, and most of her industry contacts and team members are men. In fact, there are few female C-suite leaders in the electrical utility industry and in the ESCO Technologies family, which is the parent organization of Doble.

Scally’s leadership style is open, and collaborative. She encourages a culture of trust. “I put as much emphasis on the ‘know how’, those skills and competencies as I do on ‘knowing how to behave.’”, she says. “I want as much as possible an environment where we can have candour. We can talk about the real issues and to do that you have to build a lot of trust”

There is also humour. The result is that problems and issues are identified early, avoiding the problem being compounded, because there is trust among the team members.

Scally describes herself as “technology inclined” and being in manufacturing at Doble combines everything she knows, and what she loves to do – high tech, electronics, a utility environment, and infrastructure. “I like technology … and what I am doing now is very clean manufacturing. It’s very high tech.”

In addition, she says, manufacturing is an intelligent industry. “It attracts competent creative people who know how to bring together materials, components, skillsets, tools, and teams, to produce valuable products that make all our lives better. It doesn’t get much better! A stellar industry where women can excel at all levels.”

Advice to her younger self:

“Definitely know yourself,” is Scally’s credo. She learned at a young age that you cannot control everything, but you can control your emotions and your ego.

Scally is an avid CBC fan, in both French and English. She listens to Radio-Canada’s “Plus on est de fous, plus on lit!” and CBC’s science show, Quirks & Quarks.