Canadian Economy Expanded 4.5 Per Cent in May as Lockdowns Eased

ECONOMY BEGINS HEALING IN MAY

The Canadian economy climbed 4.5 per cent in May, following two months of unprecedented declines over March and April. A preliminary estimate from Statistics Canada suggests that the economy posted a further gain of 5 per cent in June, which would leave economic activity 10.4 per cent below February’s pre-pandemic level. It also implies that the economy shrank at an eye watering annualized rate of 40.7 per cent in the second quarter. (Official second quarter GDP numbers will be released on August 28th.) 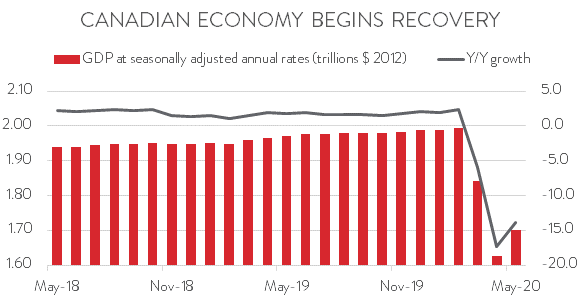 Today’s GDP report confirms that the economic recovery began in May and appeared to pick up steam in June, with the back-to-back gains attributable to fiscal and monetary stimulus and the easing of lockdowns. But, thereafter, the recovery is likely to follow a prolonged and bumpy course, in large part due to ongoing virus containment measures. In other words, the economy faces a long uphill battle to get back to pre-crisis levels.

The gains in May were widespread, spanning 14 of 16 major industries. Accommodation and food services experienced the fastest growth at 24.2 per cent. Despite the double-digit increase, output remained 57.4 per cent below February’s level.

Construction output jumped 17.6 per cent, its largest monthly increase on record, thanks to the easing of COVID-19 restrictions, particularly in Ontario and Quebec.

Wholesale and retail trade expanded 11.1 per cent. The gain in wholesale trade was led by building material and supplies merchant wholesalers, while motor and vehicle parts dealers contributed the most to growth on the retail side. 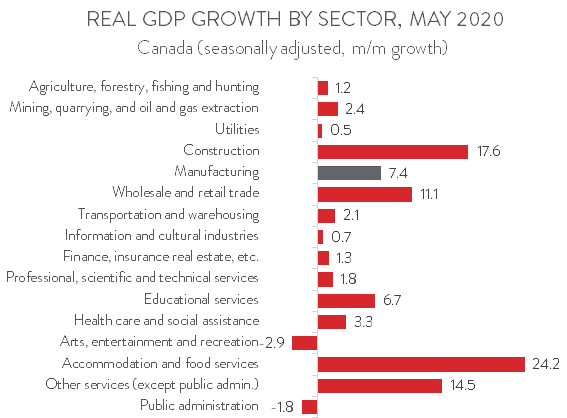 On the negative side, output in arts, entertainment and recreation fell 2.9 per cent, its third monthly decline in a row. May was the second straight month in which no professional sports were played. The public administration sector also experienced its third consecutive monthly decline in May, with output down 1.8 per cent.

The manufacturing sector also saw its fortunes start to turn around in May, with output rising 7.4 per cent. However, this still leaves the sector with a big hole to climb out of, given that output plunged by a total of 28.9 per cent over March and April. Put another way, even with May’s gain, manufacturing output remained 23.7 per cent lower than February’s pre-pandemic level. 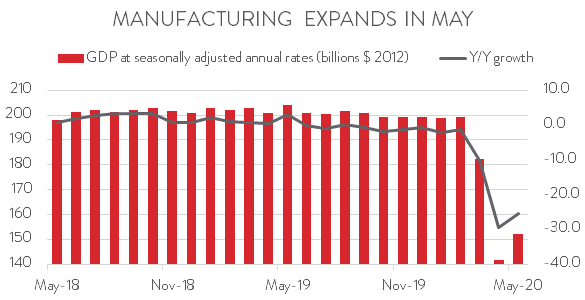 Output was up in just 6 of 11 manufacturing subsectors in May. The rebound was concentrated in motor vehicle and parts, with the restart of the auto industry driving output up 165.9 per cent. Despite the triple-digit gain, output remained 72.7 per cent below February’s level. 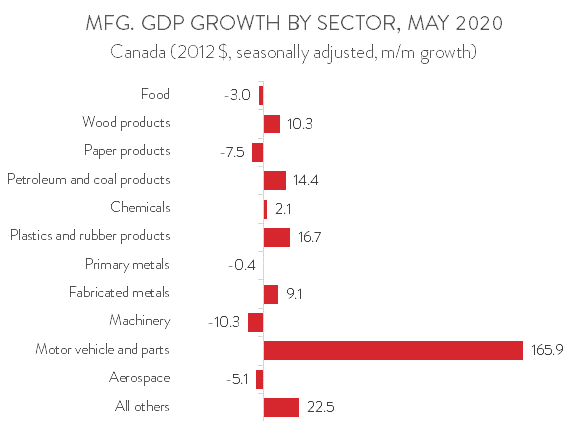