Canadian Economy and Manufacturing Expanded 0.3% in April, But Both Contracted in May

ECONOMY AND MANUFACTURING BOTH EXPAND 0.3% IN APRIL

The Canadian economy grew 0.3% in April, the tenth gain in eleven months. However, a preliminary estimate indicates that real GDP decreased 0.2% in May. 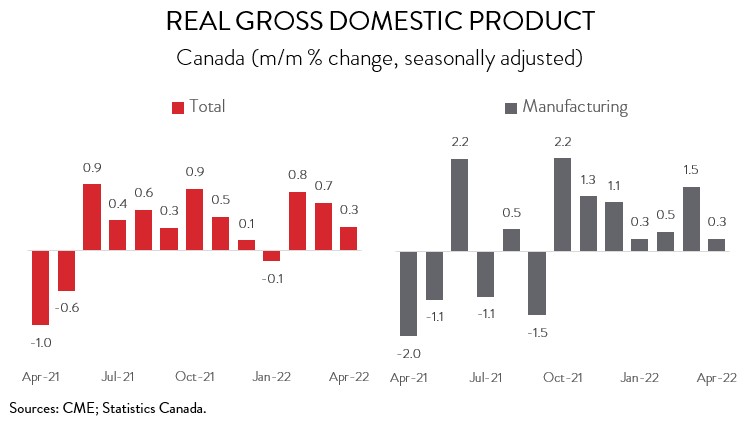 Manufacturing output also rose 0.3% in April, the seventh straight monthly gain. Unfortunately, just like the overall economy, an advance estimate suggests that the sector shrank in May. Still, an output decline in May would not be a huge surprise, given that the labour force survey already showed manufacturing employment tumbling by 2.4% that month. At the same time, US manufacturing production edged down 0.1% in May, and growth in Canada’s manufacturing sector often moves in tandem with that of its American counterpart.

While the Canadian economy continued its impressive run in April, the drop in the preliminary estimate for May could be a sign that rising interest rates and high inflation are starting to weigh on growth. These same challenges, along with supply chain bottlenecks, labour and skills shortages, and heightened global uncertainty are also likely leading to a slowdown in manufacturing activity. 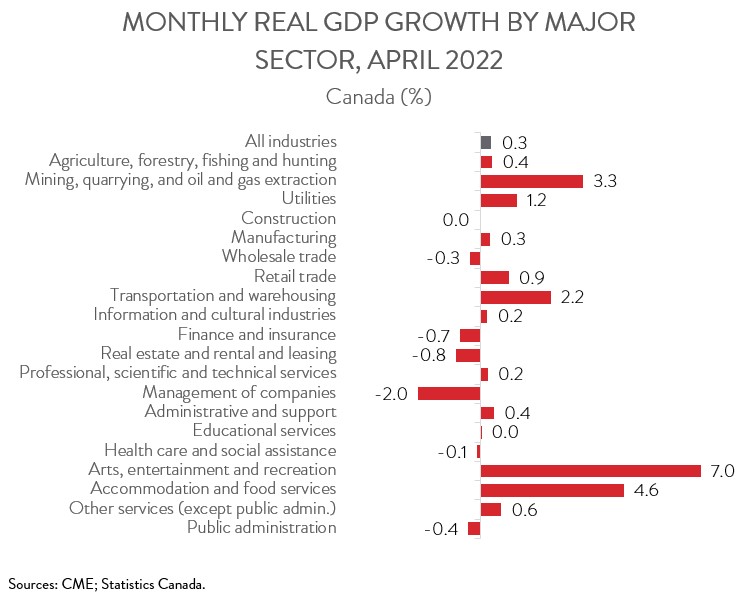 Client-facing industries also continued to climb out of the deep hole caused by the pandemic. Output growth in accommodation and food services and in arts, entertainment, and recreation reached 4.6% and 7.0%, respectively, in April.

The transportation and warehousing sector rose 2.2% in April, up for the third month in a row, as 8 of 10 subsectors were up. In particular, air transportation expanded at a double-digit pace as airlines continued carrying more goods and passengers.

On the negative side, real estate output contracted 0.8% in April, the largest monthly decline since April 2020 and down for the second month in a row following a period of eight consecutive monthly advances. The back-to-back declines can be attributed to the cooling effect of higher interest rates on housing market activity. At the same time, the finance and insurance sector contracted for the first time in 11 months, down 0.7% in April.

Turning back to manufacturing, output was up in 6 of 11 major subsectors in April. Machinery manufacturing led the way with an increase of 1.6%, the sixth gain in seven months. This was followed by the fabricated metal and wood product industries, up 1.5% and 2.3%, respectively. Among major subsectors, the wood product industry has posted the strongest growth over the pandemic, with output climbing by a total of 16.2% since February 2020.

Motor vehicle and parts manufacturing rose 1.0% in April, building on the back-to-back 8.7% gains posted in February and March. The sector has expanded by a cumulative 11.5% through the first four months of 2022, as supply chain bottlenecks, including semiconductor shortages, continued to ease. 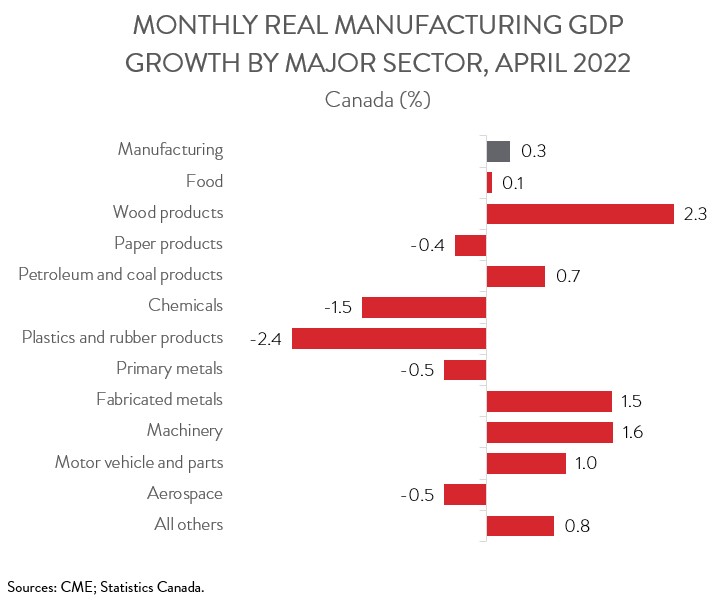