July was a solid if unspectacular month for the Canadian economy. Buoyed by a strong showing in nondurable goods manufacturing and wholesale trade activity, overall GDP growth came in at 0.22 per cent for the month – equivalent to an annualized increase of about 2.7 per cent. That represents an improvement over a relatively weak showing in June and is exactly in line with the average pace of economic growth in Canada so far this year. 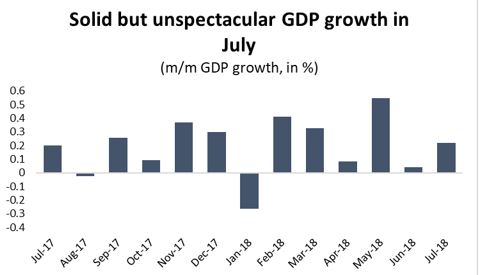 July’s growth was heavily concentrated in the manufacturing sector. GDP in manufacturing jumped by 1.24 per cent compared to June – equivalent to an annualized increase of almost 16 per cent. Manufacturing makes up a little more than 10 per cent of the Canadian economy, but it accounted for about 58 per cent of all GDP growth nation-wide in July. 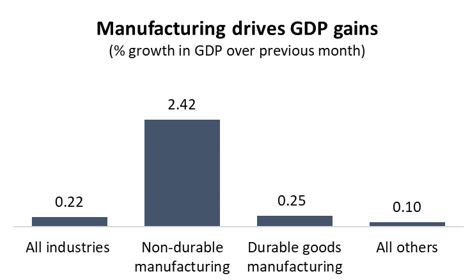 Those gains spilled over into related support industries. Wholesale trade activity jumped by more than 1.4 per cent in July, while value-added activity in transportation and warehousing was 0.9 per cent higher compared to June.

Aside from wholesale trade, transportation and warehousing, July was a relatively flat month for the services sector. Most services industries saw positive overall growth, but the numbers were decidedly modest. 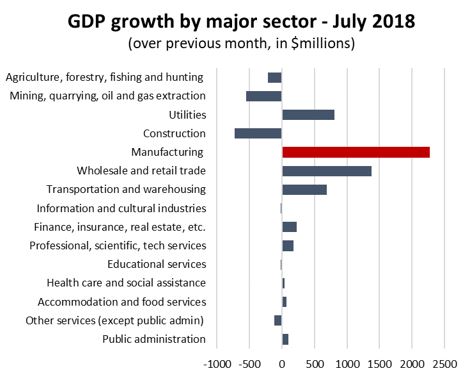 On the goods side, GDP growth outside of manufacturing was mostly negative. Value-added construction activity fell by 0.6 per cent compared to June, as did GDP in agriculture. Energy and mining activity fell by 0.3 per cent. Most utilities were flat or negative as well, with the notable exception of electric power generation, transmission and distribution, which also surged ahead in July.

Looking more closely at the manufacturing sector, July’s 1.24 per cent growth represents the fastest single-month increase in GDP since last November. On top of that, data revisions boosted June’s GDP numbers from 0.3 per cent to 0.8 per cent, meaning that July’s growth was built on a stronger base than initially realized. 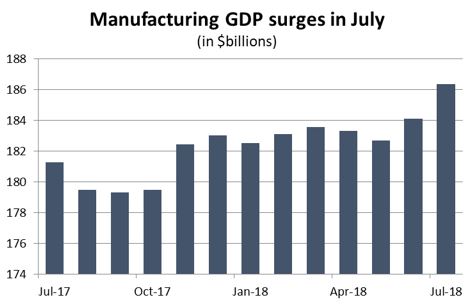 Through seven months, GDP growth in manufacturing is tracking at 2.5 per cent compared to the same period in 2017 – slightly below the all-industry average. That could change in the coming months, however. Beginning last July, manufacturing activity hit a slump that lasted through to October. It will take very little in the way of additional monthly GDP gains for year-over-year growth to accelerate beyond 2.5 per cent.

GDP gains in manufacturing were widespread in July. Eight of the eleven leading manufacturing sub-sectors posted gains, with the largest increases coming in non-durable goods industries. Leading the way were petroleum refining and chemicals production, which posted increases of 7.6 per cent and 5.5 per cent, respectively. There were also sold gains in food and beverage industries, as well as in wood products, primary and fabricated metals, and machinery production. 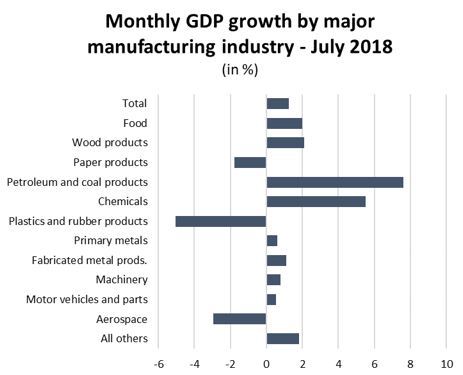