A surge in part-time jobs in Ontario propels the Canadian labour market in July.

July was a month of mixed signals for the Canadian labour market. Headline numbers look good, but much of the underlying data gives cause for some concern.

Starting with the good news, the Canadian economy added 54,100 net new jobs last month. That number built on the 31,800 jobs created in June and is a vast improvement over the shrinking jobs market in April and May. 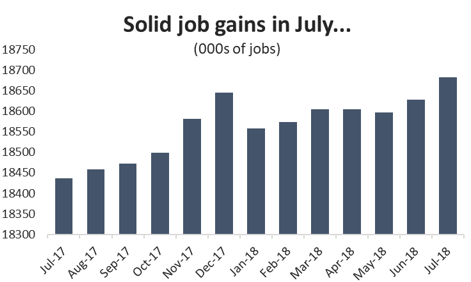 The 0.3 per cent increase in employment in July was also enough to push the total number of jobs back above December 2017 levels. Canada started 2018 with a large drop in employment and it has taken until July to recover.

The addition of 54,100 net new jobs also helped to drive the unemployment rate back down to 5.8 per cent after briefly jumping to 6.0 per cent in June. Even since hitting a new all-time low in December, the jobless rate has been pretty steady, holding at 5.8 per cent in six of the last eight months.

It may seem churlish to point to a jobs report which includes record employment levels and an all-time-low unemployment rate and sat that it was disappointing, but that is in fact the case here. For starters, the quality of available work deteriorated as all the new jobs created last month were in part-time positions. All told, there were 82,000 net new part time jobs across Canada in July (mostly in Ontario), while there were 28,000 fewer full-time jobs (also mostly in Ontario). Although there was solid growth earlier in the year, full-time employment across Canada plateaued in April and has been drifting downwards since that time. 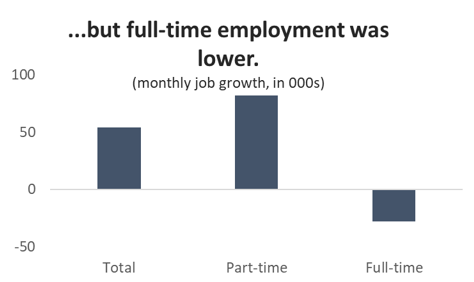 The loss of full-time jobs and creation of more part-time work also had an impact on wages across the country. Average hourly wages had been rising through 2017 and into this year as labour markets tightened and full-time employment rose. However, after peaking at 3.9 per cent in April, year-over-year wage growth has begun to drift lower as average hourly income have fallen.

It also bears repeating that Canada’s record-low unemployment rate through most of 2018 is at least as much about declining labour force participation as it is robust job creation. While job growth in 2017 certainly helped absorb thousands of unemployed Canadians (there are nearly 158,000 fewer unemployed individuals today than there were a year and a half ago), it is also true that fewer Canadians are actively looking for work. Interestingly, this trend is most pronounced for males in their prime working years (25-54). 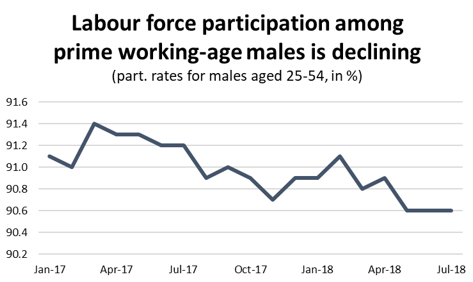 For the second month in a row, employment gains were heavily concentrated in Ontario. The province added 60,600 net new positions in July, although, as mentioned above, that’s the result of fewer full-time jobs being outweighed by a large jump in part-time work. There was also good news coming from the Pacific coast as BC posted its first positive jobs report since April. BC added 11,200 positions in July, recovering a little over half the job losses over the previous two months. Employment was also notably higher in Newfoundland and Labrador, as well as PEI. 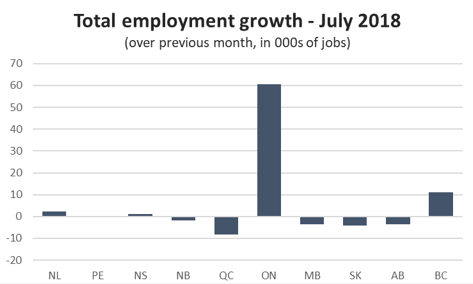 Elsewhere, however, things were not as rosy. All three prairie provinces posted job losses in July, with the largest decline coming in Saskatchewan (4,200 jobs, or 0.7 per cent). Quebec also saw employment fall for the third time in four months.

At the industry level, job gains were concentrated in two sectors – health care and social assistance; and education services. Those two sectors combined to add 67,200 jobs in July. While it is tempting to ascribe that increase to the back-to-work legislation ending the York University strike, the timing does not quite work as the labour force survey is usually conducted in the middle of the month while legislation was passed on the 24th. Meanwhile, there were notable job losses in construction (12,300 positions) and manufacturing (18,400). 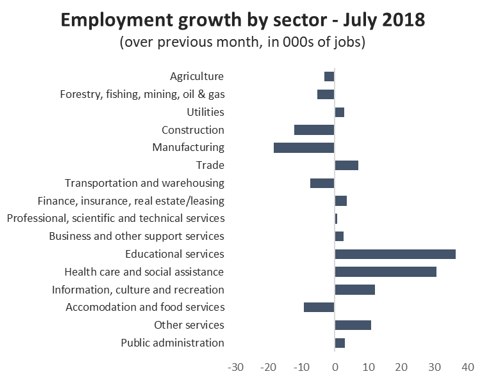 The loss of 18,400 jobs is a relatively steep decline in manufacturing employment and continues a trend which has seen the sector gradually unwind an impressive streak of job creation throughout 2017. From January to December 2017, manufacturers added about 86,000 jobs across the country. Since then, however, 51,000 of those positions have disappeared. At 1.72 million jobs, manufacturing employment is now at its lowest level since April 2017. 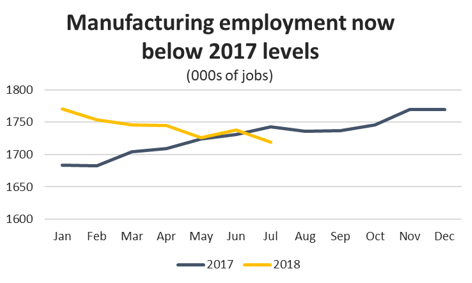 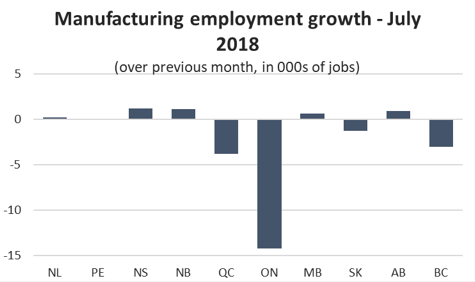 Offsetting those losses to some extent, manufacturing employment was higher in most of Atlantic Canada, as well as in Manitoba and Alberta. Of those, the largest gains were in Nova Scotia and New Brunswick, which added 1,200 and 1,100 jobs, respectively.