The Canadian job market finally began to show some signs of life in June after what has, up until now, been a poor year for employment growth across the country. Buoyed by a recovery in manufacturing employment in Ontario, there were 31,800 new jobs created last month – not an especially large number, but the first time since March that employment has actually gone up. Even with that increase (of about 0.2 per cent over May), however, there are still 17,100 fewer jobs in Canada today than there were at the end of 2017. 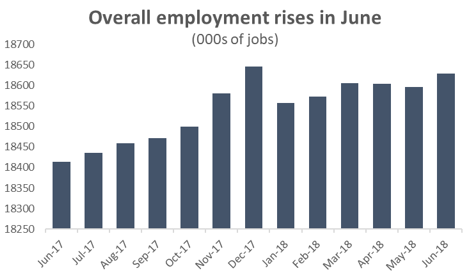 Because employment growth was solid through much of 2017, the year-over-year job numbers do not look quite as bad. Through the first half of 2018, total employment is tracking 1.5 per cent higher than it was over the same period last year. However, that figure is poised to fall rapidly in the coming months unless the job market kicks into gear.

The downside to June’s positive employment numbers is that most new jobs were created in part-time positions – about 22,700 jobs, compared to just 9,100 for full-time workers. The increase in part-time work in June is so far an exception to the general trend in 2018, however. Since December, Canada has created about 85,000 full time jobs, but eliminated more than 100,000 part-time positions. 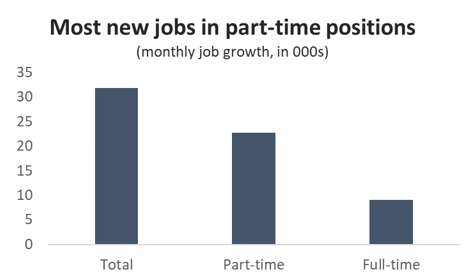 Across the country, labour markets were mixed in June. Ontario, PEI and the prairie provinces all saw employment rise, while there were fewer jobs elsewhere. On a percentage basis, Saskatchewan was Canada’s jobs growth leader, with employment rising 1.5 per cent compared to May. The creation of 8,000 new jobs in that province erased two months of losses and brought employment to its highest level in 16 months. 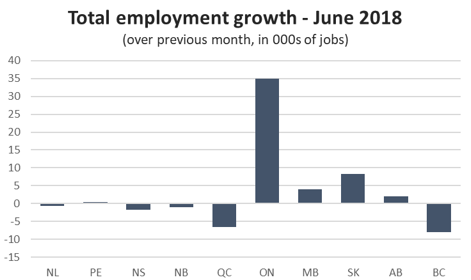 In terms of the number of jobs created, however, it was Ontario that carried the ball in June. Buoyed by an uptick in manufacturing and construction activity, the province added 34,900 jobs last month, bring total employment to its highest level on record.

Meanwhile, it was another rough month for the BC labour market. Canada’s job-creating juggernaut of the last two years has fallen into a bit of a slump. Employment has fallen in five of the last six months, eliminating nearly 30,000 jobs in the process.

At the industry level, job gains were concentrated in the goods sector, which added 46,600 positions, offsetting the loss of 14,700 services-sector jobs. Both construction and manufacturing employment rebounded after a poor showing in May, while resource-extraction industries like mining, oil and gas made significant gains (12,900 jobs – an increase of about 3.8 per cent). 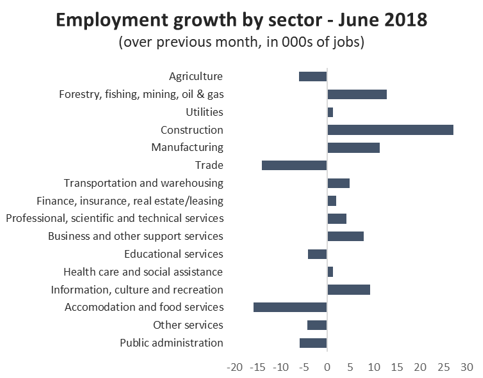 On the negative side, accommodation and food services industries lost 15,900 jobs, giving back most of the increase in May. Wholesale and retail trade industries also dialed back employment, eliminating about 14,000 positions in June.

There was some modestly good news for manufacturing workers in June, as employers hired more people for the first time in months. There were 11,300 net new manufacturing jobs created in June, ending a streak of four consecutive months of declining employment. While the increase was relatively large – about 0.7 per cent compared to May – it was still not enough to compensate for job losses the previous month. Total manufacturing employment is sitting at about 1.74 million jobs, compared to 17.7 million in January. 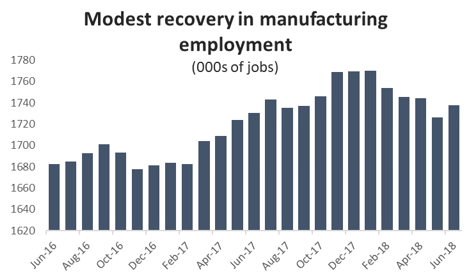 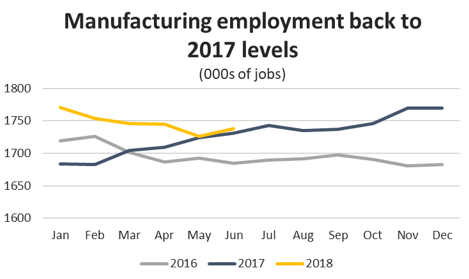 Manufacturing job gains in June were driven by a turnaround in Ontario. After shedding 20,900 jobs in April and May, the province’s manufacturers hired back 16,900 of those workers in June – an increase of 2.2 per cent. There were also solid gains in Saskatchewan, although on a much smaller scale (400 jobs, or an increase of 1.4 per cent), and a modest increase in Quebec (1,500 jobs). 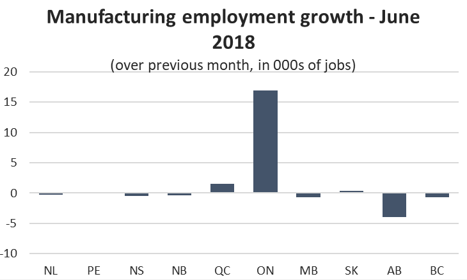 Elsewhere, manufacturing employment growth was negative. Alberta lost 4,000 manufacturing jobs (a 3.0 per cent decline) in June, while another 1,300 jobs were lost across Atlantic Canada. There were notable declines in Manitoba, as well as smaller job losses in BC.

The picture through the first six months of 2018 is almost the polar opposite of the monthly figures in June. Compared to the same period in 2017, Alberta manufacturing employment has rebounded sharply; there were about 14,300 more jobs in 2018 compared to the January-June average last year – an increase of 12.4 per cent. There have been strong gains across the Atlantic provinces, as well as in BC. Meanwhile, Ontario and Quebec have posted relatively slow job-creation numbers in manufacturing, while Manitoba is the only province where manufacturing employment in the first half of 2018 was lower than in the first half of 2017. 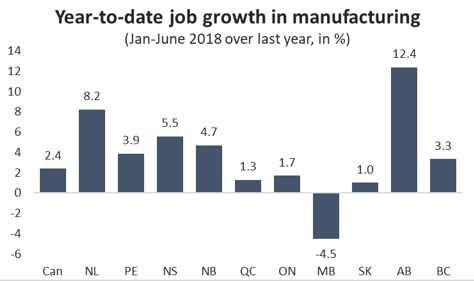