Job losses in manufacturing and health care keep employment flat again in May.

After a solid performance in the last few months of 2017, Canada’s job market has completely stalled, as in May the economy once again failed to create any net new jobs. All told, there were 7,500 fewer positions last month compared to April. While that total represents a negligible decline compared to the 18.6 million jobs across the country, it marks the second consecutive month of no employment growth and there remain 48,900 fewer jobs available today compared to December. 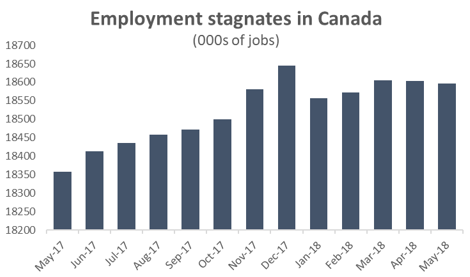 Flat employment in May meant that the jobless rate across Canada also remained unchanged for the fourth month in a row at 5.8 per cent. The unemployment rate continues to sit at historic lows not because of robust labour demand, but because an aging population is dragging down growth on the supply side. Over the last two years, total employment has risen by 3.1 per cent, but the labour force itself has only increased by 1.9 per cent. 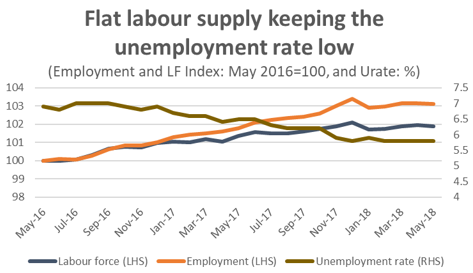 In April, the silver lining to the flat jobs numbers was the fact that a significant number of part-time jobs were converted to full-time positions. In May, however, the opposite was true. There were 31,000 fewer full-time jobs in Canada last month, offset by 23,600 net new part-time positions. 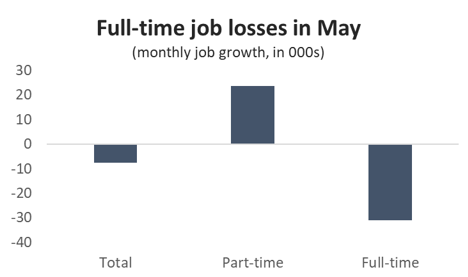 Chart showing the full-time job losses in May. Labour Force Survey Analysis, May 2018.

Across the country, job growth was mixed in May. Most of the weakness that month can be pinned on the loss of 12,400 jobs in BC (a 0.5 per cent decline) as employment growth in that province continues its recent struggles. BC had been one of Canada’s strongest job creators through 2016 and 2017, but employment has fallen in four of the last five months, shedding 21,900 jobs since December. Employment was also down sharply in Nova Scotia, where the loss of 3,600 positions was the second largest decline of any province in Canada (a 0.8 per cent decrease compared to April). There were also fewer jobs in Manitoba (1,100) and Saskatchewan (2,100) in May. 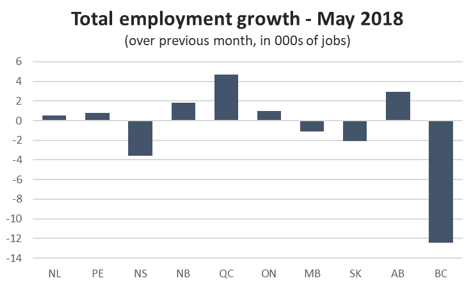 Graph showing the total employment growth for May. Labour Force Survey Analysis, May 2018.

On the positive side, employment in Quebec rebounded in May, adding 4,700 new jobs and gaining back about a third of the province’s job losses in April. Alberta also saw employment rise in May (2,900 jobs), regaining losses in the previous month. Aside from Nova Scotia, there were also solid gains across Atlantic Canada last month. In Ontario, there were just 1,000 net new jobs created in May, which is akin to zero change in a province where 7.2 million people are employed.

At the industry level, there were relatively wide swings in employment (both to the positive and negative) in several sectors. Leading the way on the positive side was the addition of 17,600 net new jobs in accommodation and food services industries, as well as 17,000 jobs in professional, scientific and technical services. In the case of hospitality industries, employment has dramatically spiked since March, while in the professional services category, the increase represents the continued recovery of jobs lost in the second half of 2017. 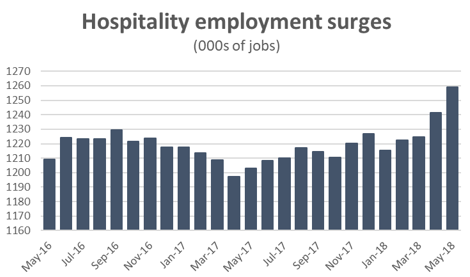 On the negative side, there were 24,400 fewer jobs in health care and social services in May, as well as 18,300 fewer positions in manufacturing. May was also a poor month for construction employment (13,000 fewer jobs) as demand for building activity fell in every province except Alberta last month. 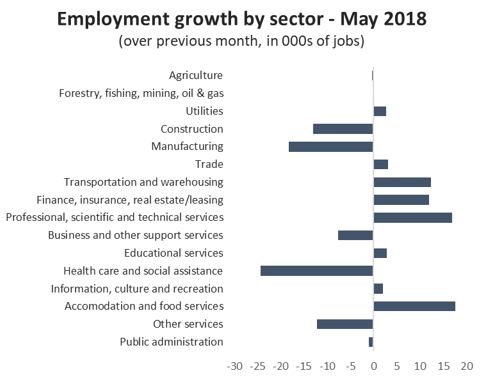 The loss of 18,300 manufacturing jobs in May confirms that the recent negative trend in employment was not an isolated phenomenon. There was a considerable hiring spree across the sector for much of 2017, but that has since been reversed. Since January, manufacturers have shed nearly 44,000 jobs across the country. 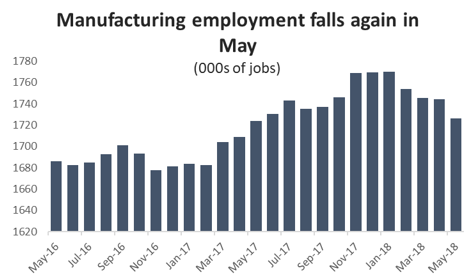 Graph showing that manufacturing employment has fallen again in May. Labour Force Survey Analysis, May 2018. 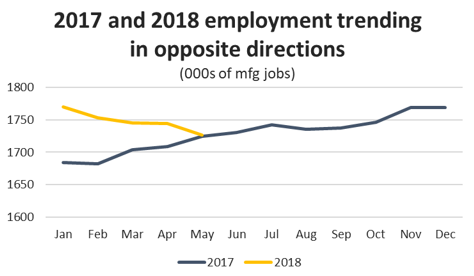 Graph showing that 2017 and 2018 employment trends are moving in opposite directions. Labour Force Survey Analysis, May 2018.

Provincially, the main weak spot in May – as it was in April – was Ontario. After cutting 8,800 jobs the previous month, Ontario manufacturers shed another 12,100 positions in April, driving manufacturing employment in the province to its lowest level since February 2017. Ontario has lost 32,500 manufacturing jobs since January. 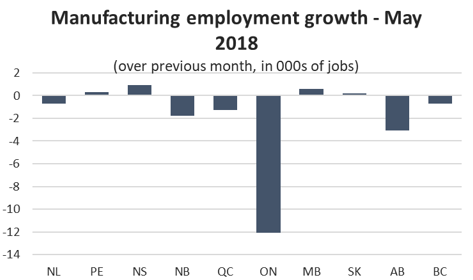 On the positive side, Manitoba and Saskatchewan posted modest employment gains on the prairies, while PEI and Nova Scotia did the same in the Atlantic region.