After showing signs of weakness in August, the Canadian labour market rebounded with a relatively solid performance in September. All told, there were 63,300 net new jobs created across the country last month. That increase represents the second-best month of job creation so far this year and was easily enough to overcome the 51,600 jobs lost in August. 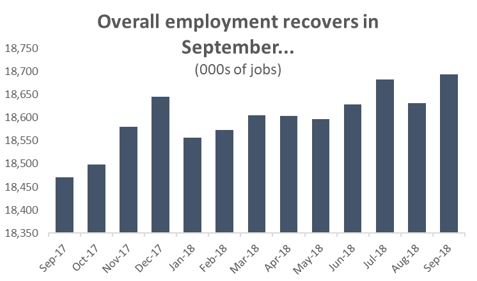 September’s jobs numbers added a boost of adrenaline to a labour market that had been sagging in recent months. With three quarters of the year now in the books, employment levels are tracking 1.4 per cent higher than they were over the same period in 2017. Meanwhile, the supply of available workers is only growing at about half that rate, adding additional downward pressure to the national jobless rate.

Indeed, with one major exception, most broad job market indicators were strong in September. The unemployment rate dipped back below 6.0 per cent and there was a small but welcome increase in the share of working-age Canadians actively participating in the labour market. The problem is that while more Canadians were working compared to August, fewer of them had full-time jobs. There were 80,200 part-time jobs created last month, while there were 16,900 fewer full-time positions available. So far, however, the loss of full-time jobs has been the exception and not the rule so far in 2018. Full-time employment is up by almost 250,000 jobs compared to last year, while there are 56,000 fewer part-time jobs available. 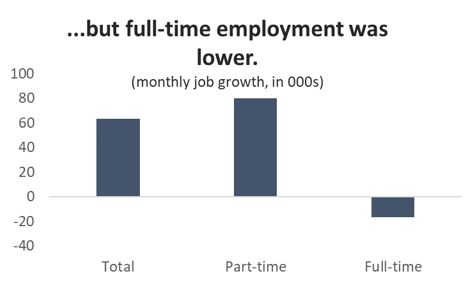 The other emerging labour market trend worth watching is the impact of job creation on overall wages. Hourly wages were up strongly compared to August, but that is a normal occurrence at the end of the summer. On a year-over-year basis, however, wage growth has been slowing since April. That month, wages were nearly 4.0 per cent higher than they were 12 months earlier. Wage growth has since fallen to about 2.4 per cent – which is in the range of the current rate of inflation. In other words, even though employment is growing and labour markets are tight, real wages remain flat. 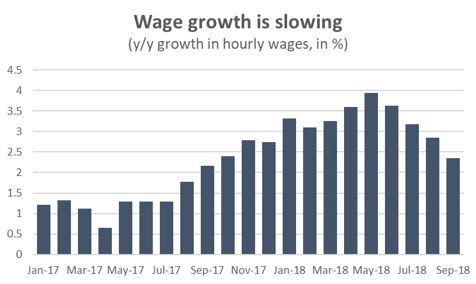 Canada’s job gains in September were heavily concentrated in two provinces – Ontario and BC. In the case of Ontario, the addition of 36,100 new jobs was only enough to partially offset steep losses in August which themselves came after dramatic gains in July. It has been a volatile few months in Ontario.

In BC, by contrast, the results were more unambiguously positive. To be sure, the first half of 2018 was a bad time to be looking for work in BC; provincial employment fell more or less steadily from December 2017 straight through to June. That trend began to turn around over the summer and accelerated even further in September. There were 33,300 jobs created in the province last month – the largest month-over-month increase since May 2015. 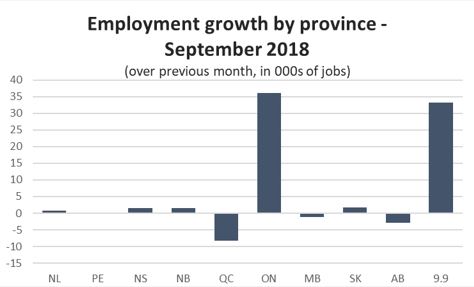 Outside of Ontario and BC, there were solid job gains across Atlantic Canada in September, as well as in Saskatchewan. Meanwhile, there were modest declines in employment in Quebec, Alberta and Manitoba that month.

At the industry level, about 70 per cent of the 63,300 jobs created in September were in the goods sector. Construction led the way, adding 28,000 jobs and erasing two consecutive months of declines. There was a similar – albeit smaller – recovery in agriculture and other resource-based industries. 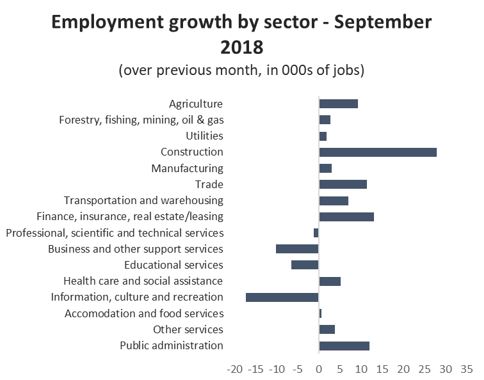 On the services side, results were mixed. There was an increase in the trade, transportation, finance and public service industries, but declines in information and hospitality, as well business services and education. 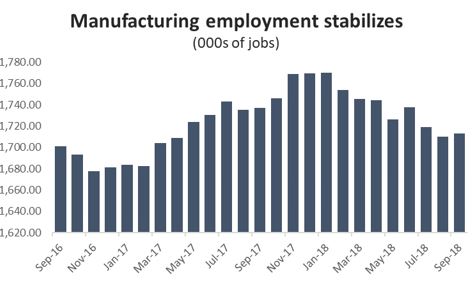 Through nine months, employment in manufacturing is still tracking 1.1 per cent higher than it was in 2017. As noted last month, that won’t last. Even though there was a small increase in manufacturing jobs in September, the trend this year is downward-sloping, while it was the opposite last year.

Manufacturing job gains were heavily concentrated in BC – the exact opposite of what was reported a month ago. In August the province lost 5,900 manufacturing jobs but this month, it added 6,400 positions – an increase of 3.8 per cent. Wide monthly swings usually indicate a survey anomaly, so it will be interesting to see what happens in October. 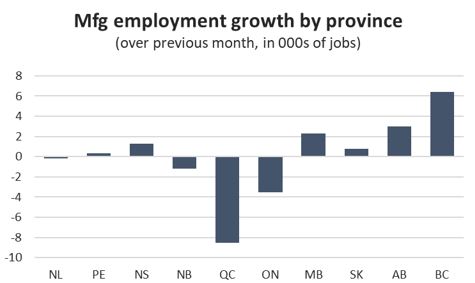