After a spate of recent poor data in exports, GDP, manufacturing sales and other economic indicators, it was something of a relief to see good jobs numbers in February.  The Canadian job market posted its second consecutive month of solid employment gains, ending a hot-cold pattern that, since July, had seen one month of robust job creation followed by a month of flat or negative growth.

All told, Canada added 55,800 net new jobs in February. That total represents an increase of about 0.3 per cent compared to January and builds on the 66,800 jobs created last month. Although it’s still early, so far employment across the country is tracking a solid 1.9 per cent higher compared to the first two months of 2018. 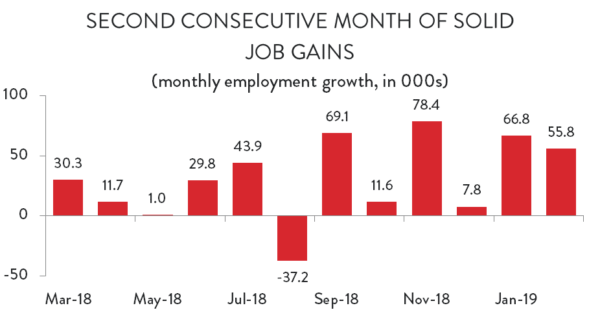 Despite solid job creation, the unemployment rate was unchanged in February, remaining at 5.8 per cent as more Canadians were actively looking for work. After drifting downwards for most of 2018, the labour force participation rate has begun to rise again – increasing from 65.4 per cent in December to 65.8 per cent in February – its highest level since May 2017. With more Canadians in the labour pool, businesses were able to absorb these job-hunting Canadians without any impact on the unemployment rate.

Adding to the good news, February’s employment gains were entirely in full-time positions. There were 67,400 full-time jobs created last month, while 11,600 fewer part-time jobs were available. 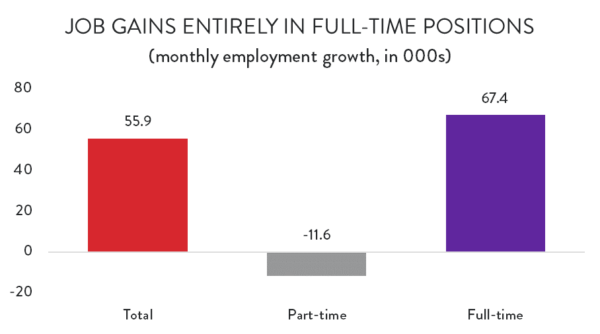 As expected, low unemployment and solid labour demand are starting to exert some upward pressure on wages. Year-over-year wage growth had been trending downward since hitting a recent high of 3.9 per cent last May, falling to as low as 1.7 per cent in November. However, wage growth leveled off in late 2018 and has begun climbing once again. Average wages in February were 2.3 per cent higher than they were 12 months earlier. 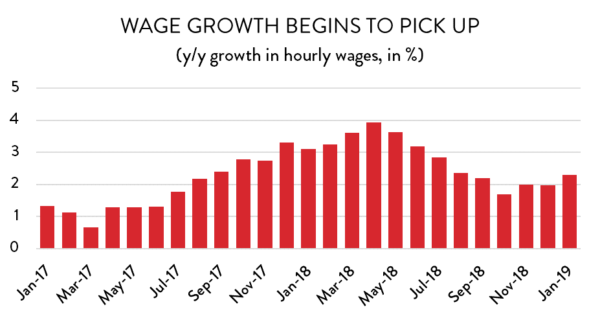 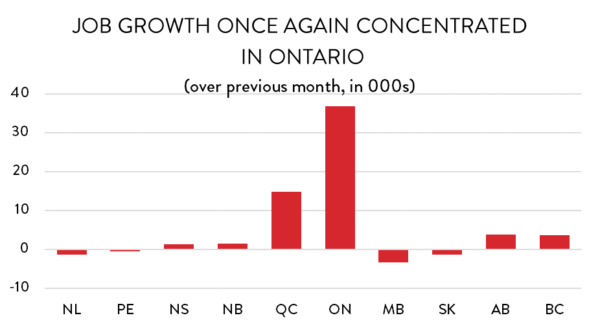 Elsewhere, the news was mixed. On the positive side, Quebec added 14,900 new jobs – an increase of about 0.3 per cent – while Nova Scotia and New Brunswick also posted solid gains. Meanwhile, there were small increases in Alberta and BC, while employment was lower in the four remaining provinces.

At the industry level, employment gains were relatively widespread. Of the 16 broad sector categories, 11 posted gains while just five were lower.

Leading the way on the positive side was a solid increase in professional, scientific and technical services jobs. Those industries created 18,300 net new positions in February (an increase of 1.2 per cent), adding to the 28,500 jobs created in January. There were also solid gains in wholesale and retail trade employment (12,100 new jobs), as well as in the public service (14,200 jobs). 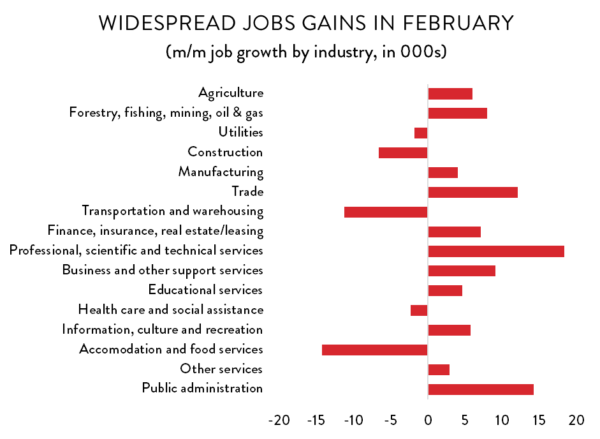 On the negative side, employment in accommodation and food services industries fell for the second month in a row, shedding 14,200 jobs. There were also 11,200 fewer jobs in transportation and warehousing, as that sector gave back most of January’s gains. Finally, the construction sector continues to weaken. Construction employment fell for the fourth consecutive month, losing 6,600 net jobs in February. Canada has lost 18,400 construction jobs since November.

After starting the year off on a weak note, there was a modest recovery in manufacturing sector employment last month. There were 4,000 net new manufacturing jobs created in February – an increase of about 0.2 per cent. That growth offsets almost three quarters of the 5,500 jobs lost in January. 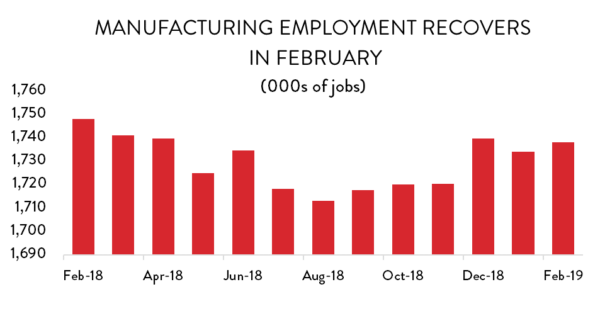 However, employment in manufacturing has been on a general upward trend since August. As a result, there has been a steady corresponding decline in the sector’s unemployment rate. Already plagued by labour and skills shortages, businesses are now looking at a manufacturing jobless rate of just 3.2 per cent in February – its lowest level in more than a year.

Tight labour markets caused manufacturing wages to spike in February. As noted above, overall wages were up 2.3 per cent on a year-over-year basis. In manufacturing, however, wages in February jumped by 5.4 per cent – more than twice the national average rate. Nova Scotia, Manitoba and Newfoundland and Labrador were the only provinces not to see manufacturing wages surge last month. 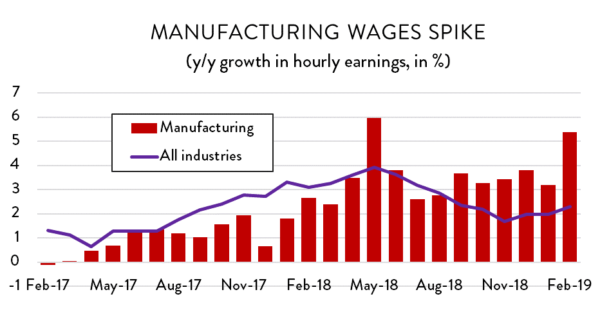 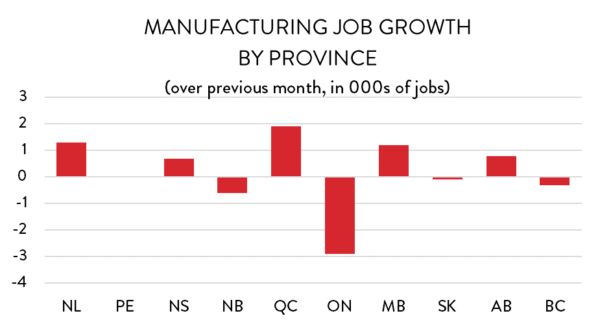