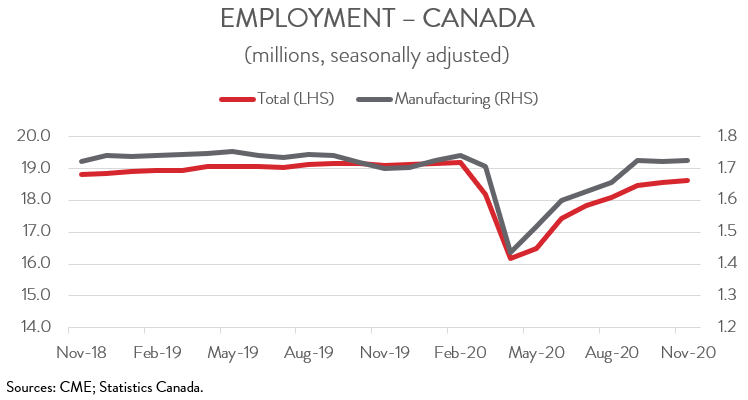 Although job growth continued to ease in November, the increase still came in above expectations. However, it is important to note that the survey was completed on November 14th, before Ontario moved Toronto and Peel Region into lockdown. With many parts of Canada still struggling to contain COVID-19, expect job cuts in pandemic-exposed industries to hit harder in December.

Employment increased in just over half of 16 major sectors, with the declines concentrated in services industries subject to renewed restrictions. Information, culture, and recreation suffered 25,600 job losses last month, its first notable decrease since April. At the same time, employment in accommodation and food services declined for the second consecutive month, falling by 23,800.

On the other hand, the job market was much sturdier on the goods side. Job gains were particularly strong in the construction industry, with employment rising by 26,300. Meanwhile, the natural resources and agriculture sectors added 9,700 and 8,500 jobs, respectively. Finally, employment in the manufacturing sector climbed by 3,800 (+0.2 per cent), its sixth increase in seven months. With this gain, manufacturing has now recouped 95.0 per cent of its pandemic-related job losses. 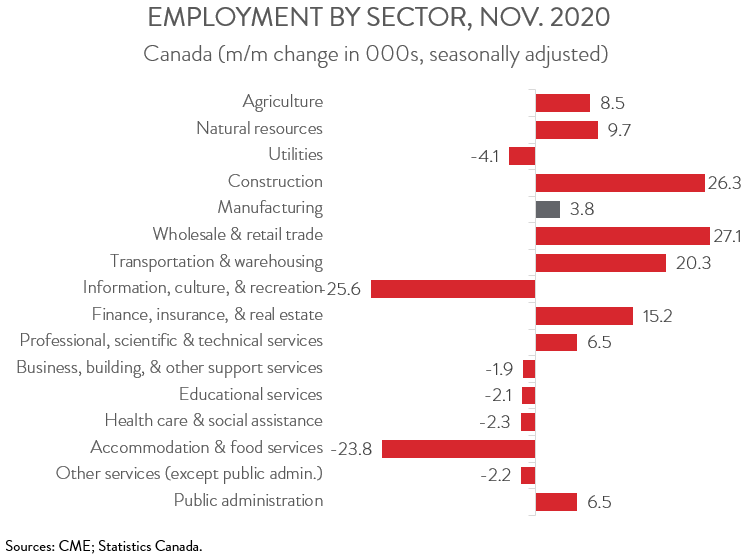 UNEMPLOYMENT RATE FALLS TO 8.5 PER CENT

The unemployment rate fell from 8.9 per cent in October to 8.5 per cent in November, its lowest level since March. On the other hand, the unemployment rate in the manufacturing sector rose for the second straight month, climbing from 5.4 per cent to 5.8 per cent. However, as has been the trend for the past number of years, the jobless rate in manufacturing remained below the all-industry average. 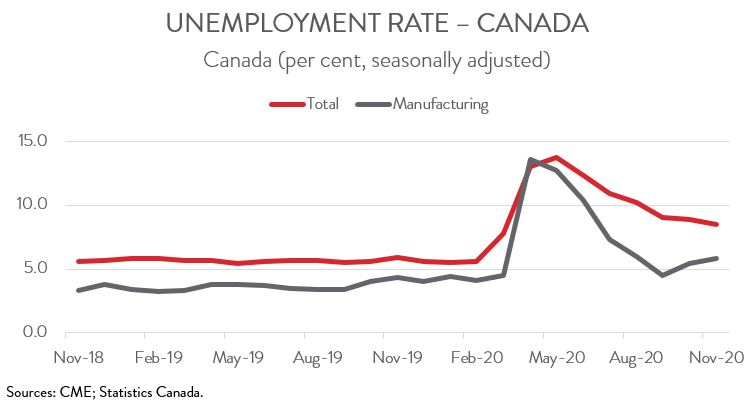 EMPLOYMENT FALLS IN THE PRAIRIES

Employment was down in all three prairie provinces, but up everywhere else. Manitoba (-18,100) experienced the steepest job losses, as the province imposed tighter public health measures prior to Statistics Canada’s survey period. At the same time, employment fell by 10,800 and 2,800, respectively, in Alberta and Saskatchewan. In contrast, employment increased in all four Atlantic provinces. Thanks to these gains, employment in Newfoundland and Labrador, Nova Scotia, and New Brunswick have all returned to pre-COVID levels. Ontario, BC, and Quebec also added jobs last month.

The story in manufacturing was also mixed, with employment up in five provinces, down in four, and stable in one. Quebec (+6,400) boasted the biggest increase last month, while Alberta (-5,000) and BC (-4,700) registered the largest losses. Manufacturing employment has returned to pre-pandemic levels in half the provinces: PEI, BC, Newfoundland and Labrador, Ontario, and New Brunswick. At the other end of the spectrum, Alberta’s manufacturing sector has been slowest to recover from the economic fallout of COVID-19. In November, employment was 11.6 per cent below February levels. 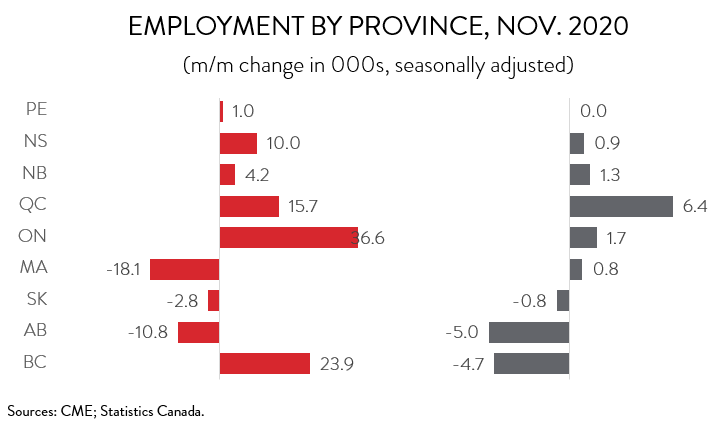