After increasing for seven straight months, total employment fell by 200,100 (-1.0%) in January. Accommodation and food services was the hardest hit sector (-112,900), consistent with public health measures introduced in several provinces. Notable declines were also recorded in information, culture and recreation (-48,400), business, building and other support services (-21,900), and wholesale and retail trade (-18,400). Construction (+22,600) was one of the few bright spots last month. 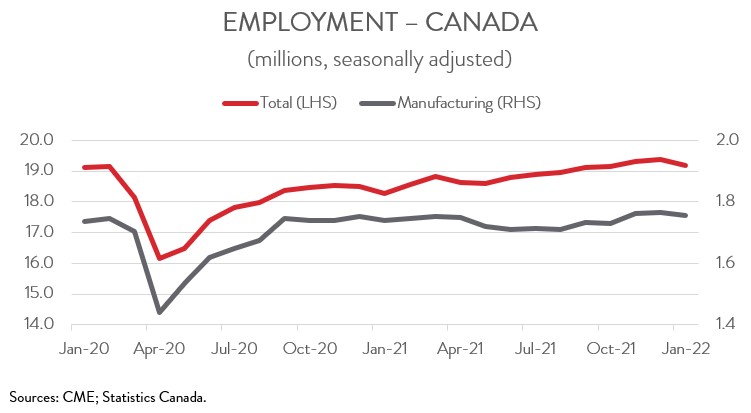 The fact that January was a tough month for Canada’s job market was not a surprise at all, due to capacity limits and closures implemented in several provinces to curb the spread of the Omicron variant. Fortunately, those restrictions were already being eased as the month ended, so it is a safe bet that employment will rebound in February.

Manufacturers shed 10,400 jobs in January, the first decline in three months. A total of 1.76 million people worked in manufacturing last month, roughly the same number (1.75 million) that were employed in the industry before the pandemic started in February 2020.

The headline unemployment rate rose from 6.0% in December to 6.5% in January, the first increase since April 2021. At the same time, the unemployment rate in manufacturing climbed from 3.1% to 3.3%, still indicative of a very tight labour market. 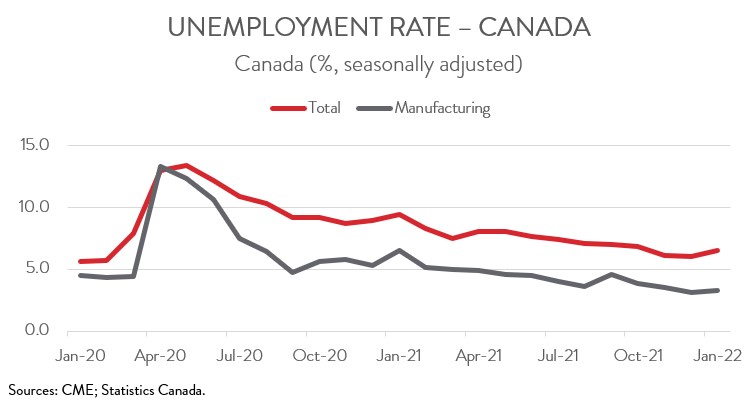 Both anecdotal evidence and hard data have signaled for many months that manufacturers were struggling to find and retain workers. Despite these extremely tight conditions, wage growth remained fairly well contained through 2021. But it was just a matter of time before things changed. Accordingly, wage growth in the manufacturing sector accelerated sharply from 3.5% in December to 5.1% in January, the fastest pace since August 2020. Upward pressure on wages will persist until the tight labour market conditions ease. 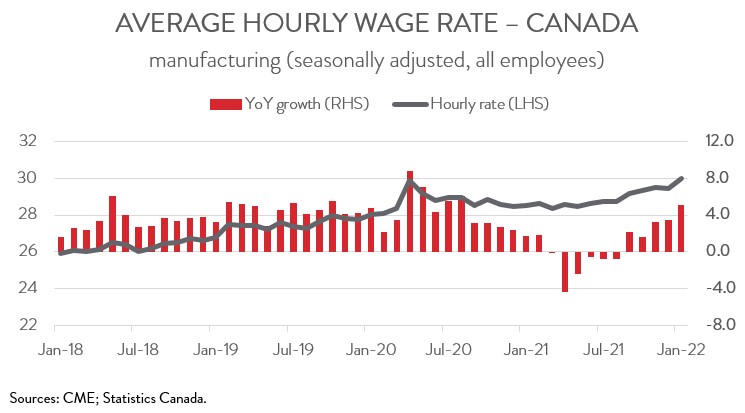 EMPLOYMENT DOWN IN FIVE PROVINCES, LED BY ONTARIO AND QUEBEC

The job losses in January spanned 5 of 10 provinces. After seven consecutive monthly job gains totalling 433,100, employment in Ontario fell by 145,700 in January. Last month’s losses were predominantly in part-time work and in accommodation and food services and information, culture and recreation, reflecting capacity restrictions and closures at many service venues.

Quebec recorded 63,000 job losses in January, the first significant decline in 12 months. Like Ontario, public health restrictions led to significant layoffs in accommodation and food services. This was partly offset by a solid increase in health care and social assistance employment.

Employment was also down in three of four Atlantic Canadian provinces: Newfoundland and Labrador (-3,900), New Brunswick (-3,100), and PEI (-2,900). The job losses in those provinces were attributable to the introduction of capacity limits at several indoor public settings. Nova Scotia bucked the trend, posting 2,700 job gains in January.

The job losses in the manufacturing sector were driven by a steep decline in Ontario (-24,900), which more than erased three straight monthly gains totalling 23,400. Three other provinces also saw manufacturing employment fall in January, although the magnitude of the declines was much more modest: BC (-1,700), Manitoba (-1,400), and PEI (-1,100). On the bright side, manufacturers in Alberta added 10,500 workers to payrolls in January, the biggest monthly increase on record. 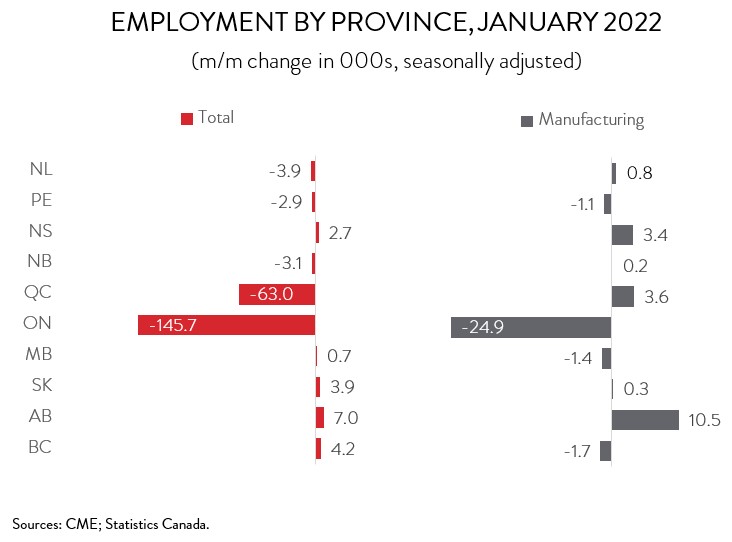