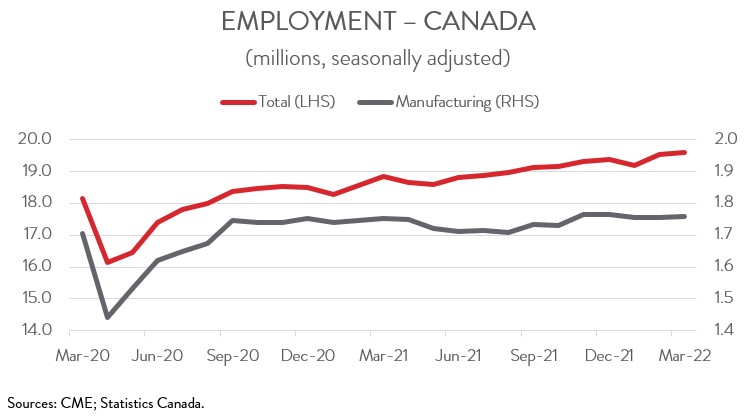 Canada’s labour market keeps humming along, with employment increasing in nine out of the last ten months. While this is an encouraging sign for the health of the overall economy, the record low unemployment rate is another indication that labour and skills shortages will remain a significant challenge for manufacturers, and this will continue to put upward pressure on wages.

Manufacturers added 3,100 workers to payrolls in March, the second consecutive month of modest job gains. As of March, manufacturing employment was 0.8% above its level of February 2020, with 1.76 million people working in the sector last month.

The headline unemployment rate decreased from 5.5% in February to 5.3% in March, the lowest rate on record since comparable data became available in 1976. At the same time, the jobless rate in manufacturing fell from 3.3% to 2.9%, matching a record low. 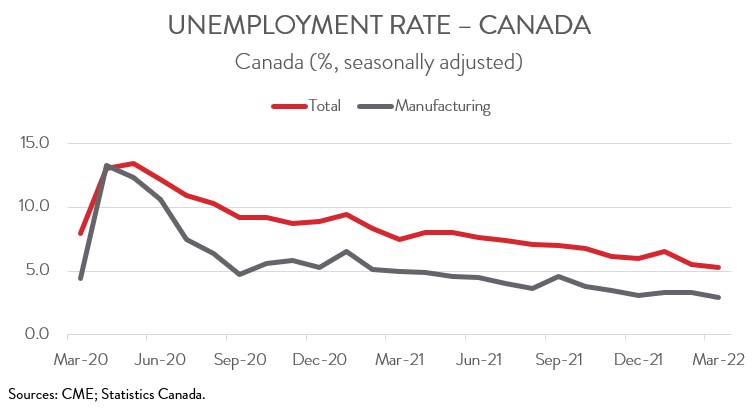 The very low unemployment rate and record high job vacancies have combined to create extraordinarily tight labour market conditions in Canada’s manufacturing sector. As such, manufacturers continue to face growing pressure to raise wages to attract and retain workers. While wages in the manufacturing sector fell 1.5% on a monthly basis in March, this only partly erased the strong gains observed in the previous two months. As a result, year-over-year wage growth in manufacturing decelerated from 7.2% in February to a still-elevated 6.6% in March. For the second month in a row, the average wage rate exceeded $30 per hour. 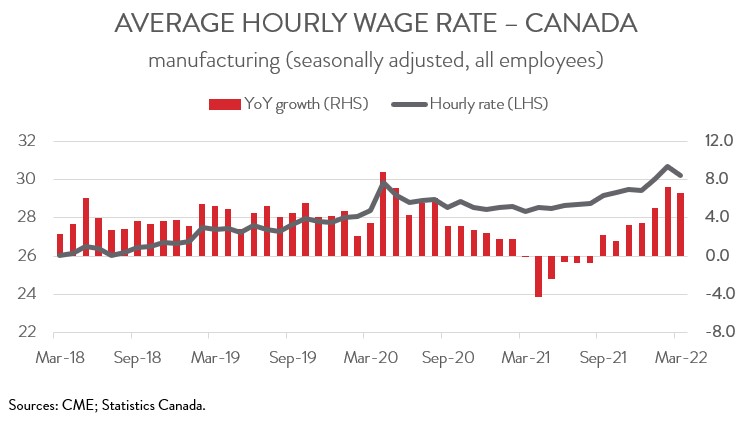 Regionally, employment was up in six of ten provinces in March. The largest proportional increases were recorded in New Brunswick (+4,100) and Prince Edward Island (+800), while the largest absolute gains were observed in Ontario (+35,100) and Quebec (+27,100). The employment increase in Ontario was concentrated in construction and natural resources, while the job gains in Quebec were driven by accommodation and food services, public administration, and educational services. On the negative side, three provinces experienced notable employment declines in March: Saskatchewan (-4,500), Manitoba (-4,200), and Newfoundland and Labrador (-2,900).

In the manufacturing sector, employment was up in five provinces, with the bulk of the gains recorded in Ontario (+8,800). In proportional terms, solid advances were also posted in Nova Scotia (+1,300) and Saskatchewan (+ 700). These increases were partially offset by noteworthy declines in BC (-6,500), Manitoba (-1,400), and Alberta (-1,300). This was the Alberta manufacturing sector’s second consecutive monthly decrease. 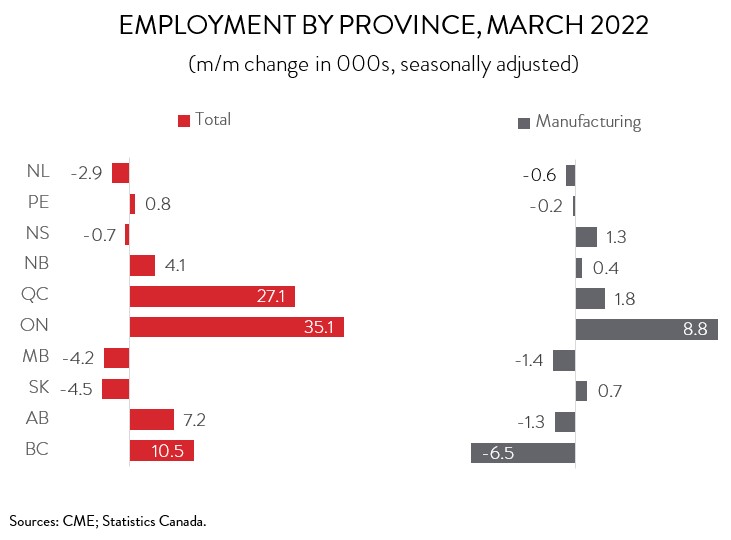