Employment fell by 39,700 (-0.2%) in August, the third straight monthly decrease. Cumulative declines since May total 113,500 jobs, with the lion’s share of the losses coming in full-time work. 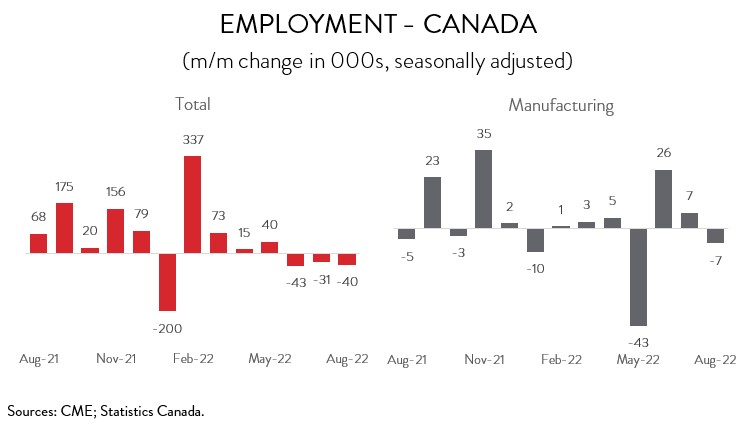 By industry, the job losses spanned 8 of 16 industries. The number of people working in educational services fell by 49,500 in August, the third consecutive monthly decrease. However, as noted by Statistics Canada, recent declines could stem from seasonal adjustment issues, so we may see a rebound in the coming months. Construction employment also posted a notable decline (-28,200) in August, down for the first time in three months. On the flipside, solid job gains were recorded in “other services” (+15,400), professional, scientific, and technical services (+14,400), and agriculture (+9,000).

While today’s job market report is yet another sign that Canada’s economy is slowing down, this is exactly what is needed if inflation is to be brought under control. With wage growth remaining strong, most analysts think that the Bank of Canada will deliver at least one more rate hike at its next meeting in October.

The labour force participation rate ticked up 0.1 percentage points in August, as more people looked for work. This, combined with the drop in employment, drove up the headline unemployment rate from 4.9% in July to 5.4% in August, the first increase in seven months. At the same time, the jobless rate in manufacturing rose from 3.0% to 3.8%, its highest point since October 2021. 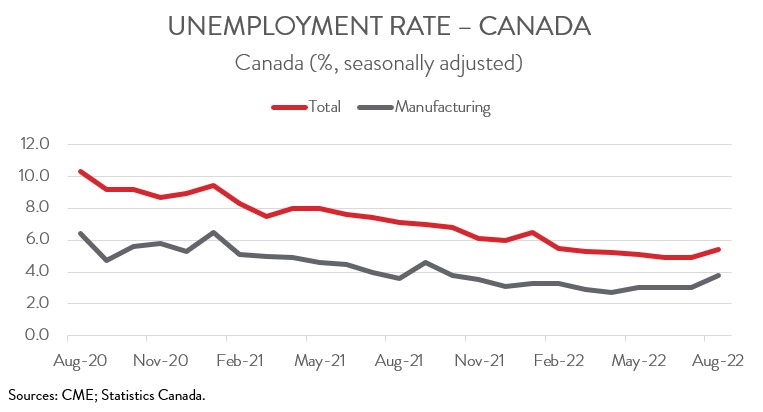 Even with the drop in hiring and the jump in the unemployment rate, wage growth in the overall economy and in manufacturing remains strong, reinforcing the view that Canada’s job market is still exceptionally tight. In the overall economy, average hourly earnings climbed 0.6% in August, pushing up year-over-year growth from 5.2% in July to 5.4% in August. Ignoring the rapid growth that occurred during the first year of the pandemic, this is the fastest pace of wage gains since records began in 1997. 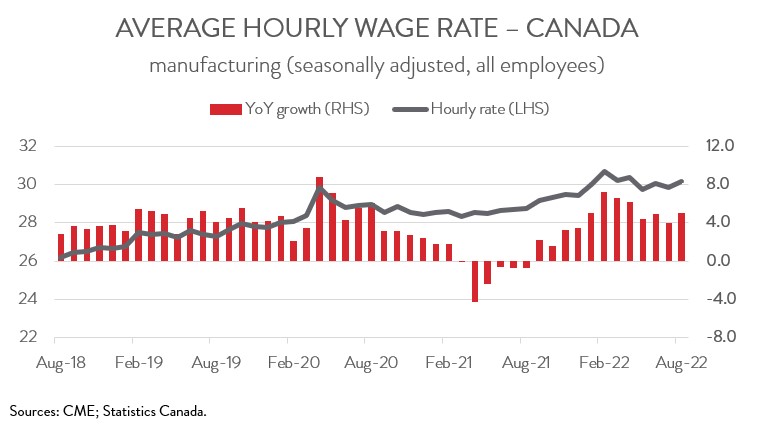 FEWER PEOPLE WORKING IN BC, MANITOBA, AND NOVA SCOTIA IN AUGUST

Regionally, the employment decrease spanned six of ten provinces in August. The largest absolute declines occurred in BC (-28,100) and Ontario (-19,200), while the largest proportional decreases were observed in Manitoba (-10,000) and Nova Scotia (-5,200). This was BC’s first significant decline since April 2021. On the other hand, Quebec was the only province to post a notable increase in employment (+27,200) in August, bouncing back from two consecutive monthly declines.

In the manufacturing sector, employment was down in five provinces in August. The bulk of the losses were recorded in Quebec (-8,500), reversing most of the gains made in the previous two months. Saskatchewan suffered the largest proportional decrease (-1,800), the second straight monthly decline. At the other end of the spectrum, manufacturers in Alberta added 5,200 workers to payrolls in August, more than making up for the 4,200 jobs erased in July. As well, manufacturing employment in PEI was up by 500 jobs, a meaningful gain for the island province. 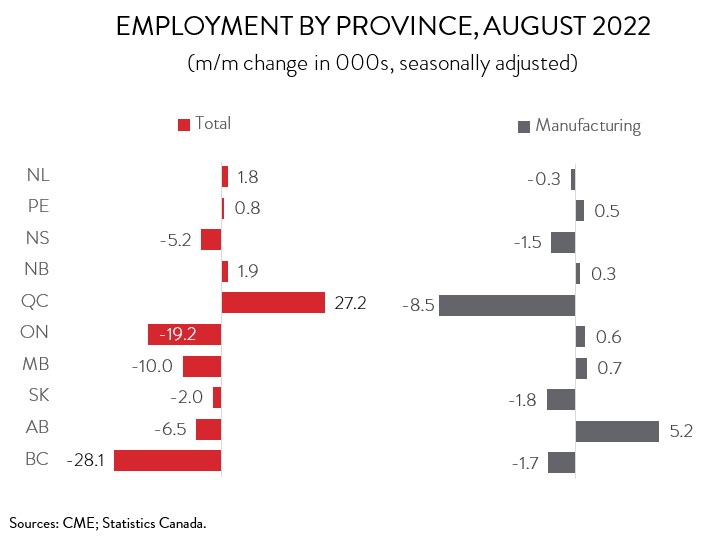