Employment Rises Slightly in September; Manufacturing Down for Second Month in a Row 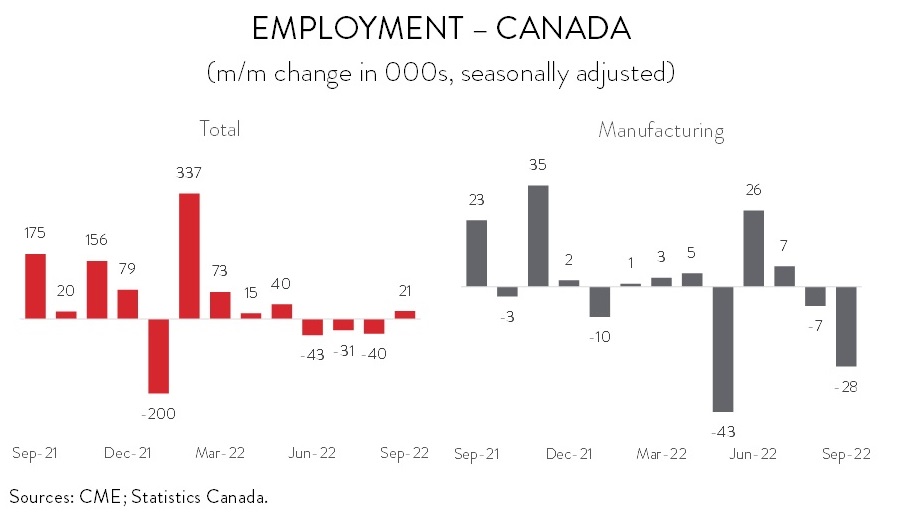 By industry, the job increases spanned 8 of 16 industries. After declining for two consecutive months, the number of employees in the public sector increased by 35,000 (+0.8%) in September. The bulk of the gains  were in educational services and health care and social assistance. In contrast, private sector employment was little changed in September. Manufacturing saw the steepest losses (see below), while notable declines were also recorded in information, culture and recreation (-21,500), transportation and warehousing (-18,200), and public administration (-11,800).

Even though employment was up in September, total hours worked dipped 0.6%, signaling that the Canadian economy continues to cool. Nevertheless, labour conditions remain very tight, with fewer people looking for work and job vacancies at a record high. This supports the Bank of Canada’s hawkish tone, with most analysts expecting it to raise its policy interest rate by 50 basis points at its October 26th meeting.

Manufacturing employment fell by 27,500 (-1.6%) in September, the second consecutive monthly decline and the steepest monthly loss since May 2022. As a result, the manufacturing sector has shed 45,500 workers over the first nine months of this year. The weak job figures for September coincide with other recent reports showing manufacturing sales falling for three straight months through July and merchandise exports down two months in a row through August.

The labour force participation rate edged down by 0.1 percentage points in September. This, combined with the uptick in employment, pushed down the headline unemployment rate from 5.4% in August to 5.2% in September. At the same time, the jobless rate in manufacturing ticked up from 3.8% to 3.9%, the second straight monthly increase. 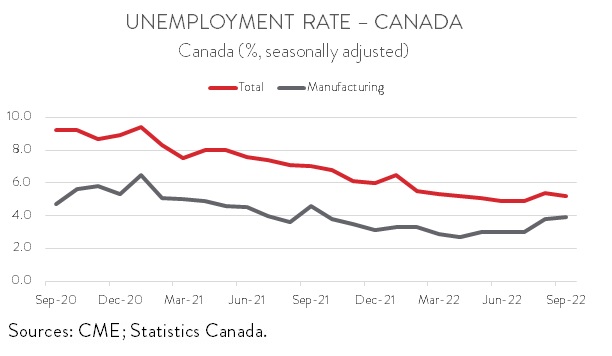 The combination of fewer people looking for work and record-high job vacancies boosted average hourly earnings in the overall economy by 1.1% in September, the biggest monthly increase since January 2022. On a year-over-year basis, wages were up 5.2%, well above the historical average of 2.8%.

A similar story is unfolding in manufacturing. Average hourly earnings rose 1.2% in September, the biggest one-month gain since January 2022. Year-over-year, wage growth decelerated from 5.0% in August to a still-elevated 4.7% in September. This pace of growth is nearly double the sector’s historical average of 2.5%. 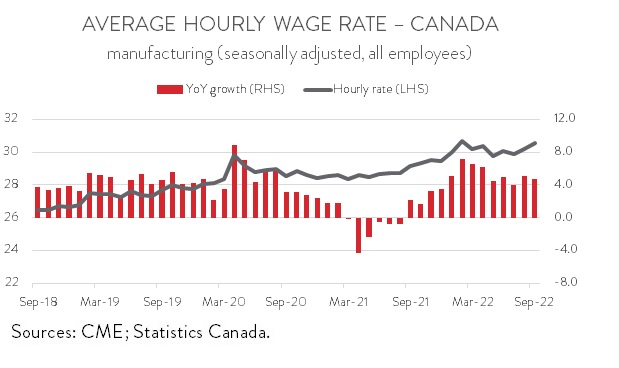 Regionally, the employment increase spanned seven of ten provinces. Employment in BC rose by 32,900 in September, more than offsetting a decrease of 28,100 in August. Manitoba also saw healthy gains, with employment up 6,900 in September, partly making up for the 10,000 jobs lost in August. On the flipside, employment in Ontario tumbled by 31,500 in September, the fourth consecutive monthly decline. It should be noted that the survey was completed well before post-tropical storm Fiona struck Eastern Canada, so its impact is not captured in this report.

In the manufacturing sector, employment was down in seven provinces in September. The bulk of the losses were recorded in Ontario (-19,100), the first decline in four months. BC suffered the largest proportional decrease, with employment falling by 5,900, the third straight monthly decline. On a positive note, manufacturers in Newfoundland and Labrador added 2,200 workers to payrolls in September, the largest monthly gain since November 2021. 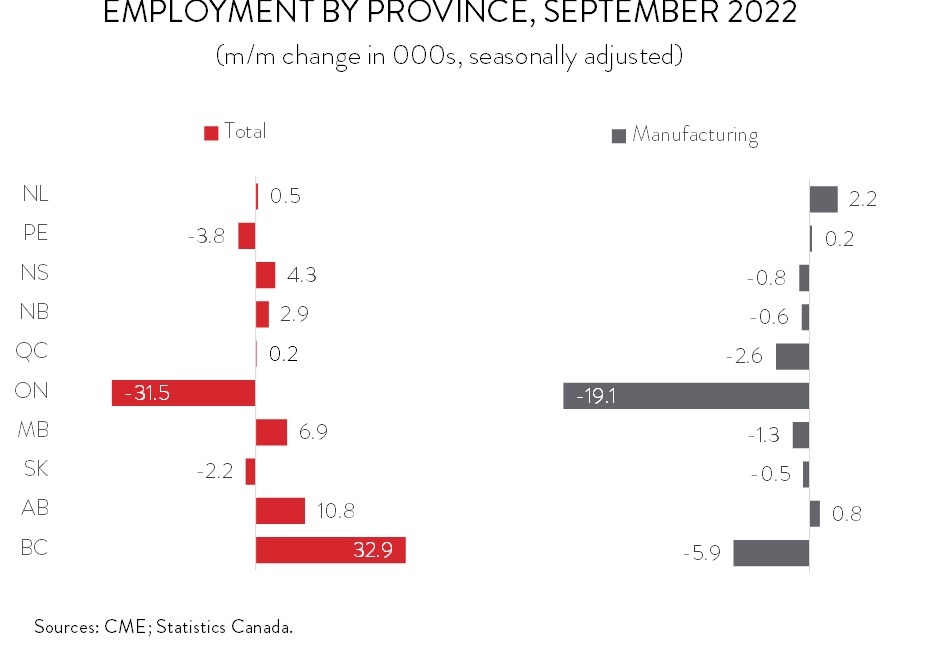