Employment increased by 34,500 in January. The new jobs were all in full-time work and were concentrated in the public sector. With last month’s gain, the Canadian economy has generated nearly 268,000 jobs over the past 12 months., equivalent to a 1.4 per cent increase.

The manufacturing sector added 20,500 jobs in January, its biggest monthly increase since November 2017. Despite this jump, manufacturing employment is still down 13,000 or 0.7 per cent from January 2019. 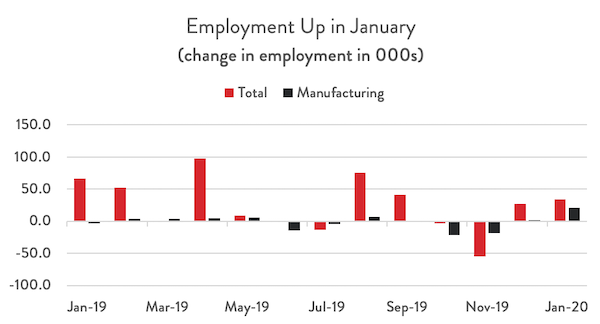 Total hours worked fell 0.1 per cent. This indicator tends to correlate with GDP growth, so the drop suggests that January may not have been a strong month for the Canadian economy. That said, the decline in hours worked could be partly attributed to extreme weather events, which affected many regions of the country including Newfoundland and Labrador, Alberta and British Columbia.

UNEMPLOYMENT RATE INCHES DOWN TO 5.5 PER CENT

Labour market conditions are even tighter in manufacturing, although its unemployment rate increased from 4.0 per cent in December to 4.4 per cent in January. This is not a new story. The unemployment rate in manufacturing has been below the all-industry average since December 2009. It is not a surprise, therefore, that the sector’s firms continue to list labour and skills shortages as one of their biggest challenges. 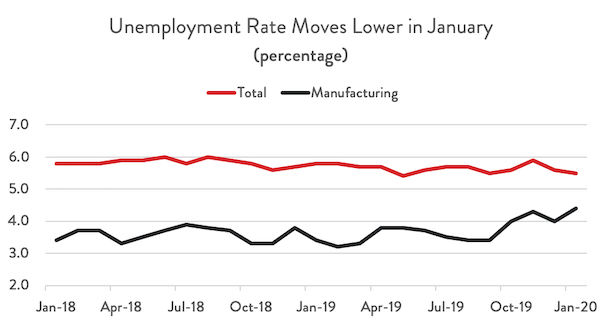 Tight labour markets continue to spur healthy wage growth, good news for Canadian workers. The average hourly wage rate increased at a 4.2 per cent pace on a year-over-year basis in January, up from 3.6 per cent in December. Year-over-year wage growth was an even stronger 4.7 per cent in manufacturing. The all-industry average hourly rate was about $28.50 in January, with the hourly rate for the manufacturing sector about $0.40 below that. 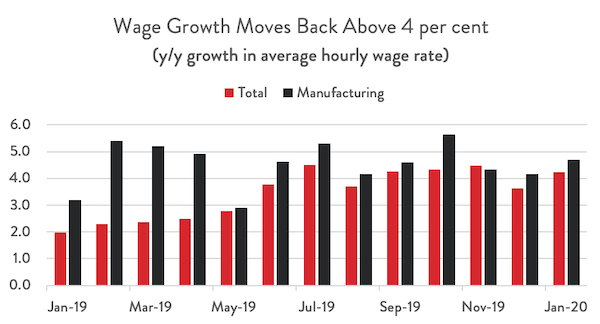 Job gains were concentrated in central Canada. Quebec and Ontario saw employment rise 19,100 and 15,900, respectively. Consistent with the overall story, public sector hiring drove the gains in Quebec. Manitoba also enjoyed solid job creation of 6,500 in January, but most of the gains were in part-time work. Employment in New Brunswick rose by 4,600, while BC added 3,400 jobs to payrolls.

Alberta was the only province to record a decline in employment in January. The province saw 18,800 jobs disappear, its third straight monthly decline. On a positive note, January’s job losses were concentrated in part-time work.

The job gains in manufacturing were widespread across 8 of 10 provinces. In fact, Nova Scotia was the only province to lose jobs in this sector last month, with PEI employment remaining stable. Quebec boasted the biggest jump in manufacturing employment, adding 8,600 jobs in January. BC, Alberta, and Ontario also posted solid manufacturing payroll gains.

All forms are sourced from CME; Statistics Canada.