Manufacturing sales fell 2.1% to $57.1 billion in April, the second decline in three months. Despite this decline, sales were 2.4% above the pre-pandemic level. The story was even more disappointing when stripping out price effects. In constant dollar terms, manufacturing shipment volumes were down 3.3% in April. 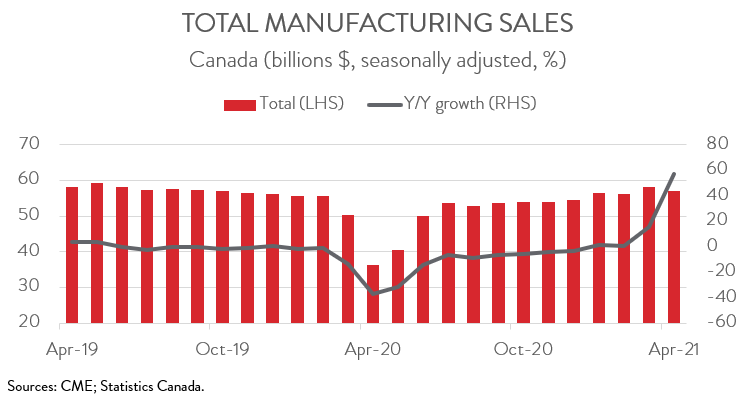 The drop in factory sales in April was mainly an auto sector story, though other sectors are also feeling the effects of supply chain disruptions due to the pandemic. Still, excluding sales of motor vehicles and parts, manufacturing sales were up 1.1% on the month. Looking ahead, notwithstanding these lingering supply chain challenges, the strong US economic recovery and the reopening of provincial economies bodes well for future manufacturing sales growth.

SALES OF MOTOR VEHICLE AND PARTS WEIGHED DOWN BY MICROCHIP SHORTAGE

The decrease in sales spanned 5 of 11 major industries. Sales of motor vehicles and parts plummeted 28.5% to $4.5 billion in April. This was the lowest level since May 2020, as the industry continued to be weighed down by the global microchip shortage. Indeed, according to Statistics Canada, every major auto manufacturer halted or ramped down production in April.

After increasing for six straight months, sales of petroleum and coal products fell 7.1% to $5.1 billion in April, attributable to temporary maintenance shutdowns at some refineries. Despite this decline, year-over-year sales were up 160.7% from the pandemic lows hit last spring. 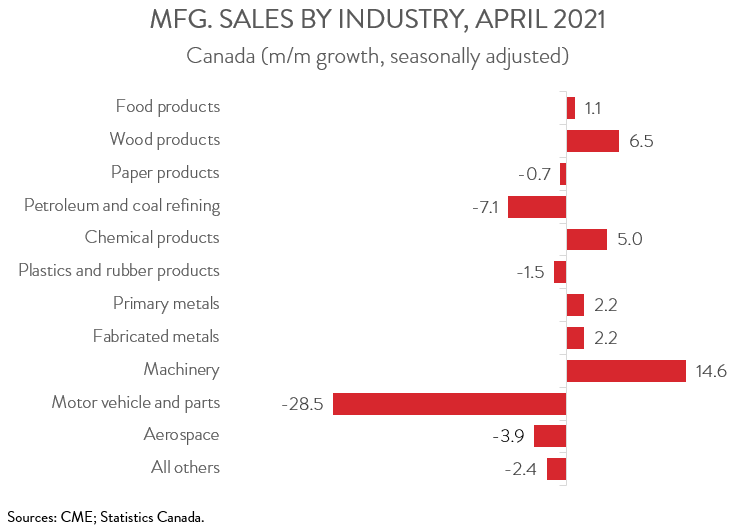 On the positive side of the ledger, machinery sales jumped 14.6% to $3.7 billion April, the highest level on record. Year-over-year, sales of machinery were up 29.3%. At the same time, wood product sales rose 6.5% to $4.9 billion, also a record high, as the industry continued to enjoy high prices and robust demand for its products. As well, sales of chemicals increased 5.0% to $5.1 billion, thanks to higher sales of basic chemicals, as well as resin, synthetic rubber, and artificial and synthetic fibres and filaments.

Regionally, sales were down in 5 of 10 provinces. Ontario posted the largest decline, with sales falling 5.5% to $23.9 billion in April, the lowest level since June 2020. The downturn came as the auto sector was forced to ramp down production because of the shortage of microchips.

Nova Scotia also had a tough month, with sales down 14.8% to $816.3 million. The decline was attributable to lower sales in the transportation equipment industry.

Alberta provided a partial offset, with sales climbing 6.5% to $6.9 billion. This was the province’s eighth consecutive monthly increase and the highest level since May 2019. The gain in April was driven mainly by higher sales of food, machinery, and chemicals. 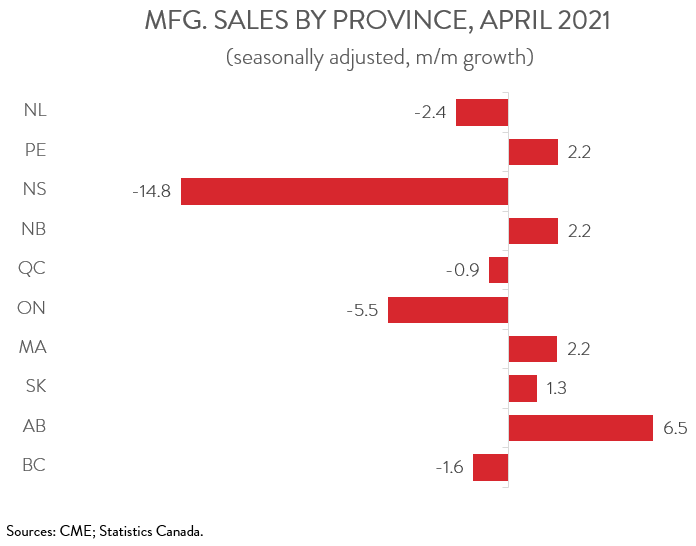 Total inventories rose 0.8% to $89.2 billion in April on higher inventories of machinery, motor vehicles, and food. This, combined with the decrease in sales, pushed up the inventory-to-sales ratio from 1.52 in March to 1.56 in April. This ratio represents the number of months it would take to completely clear inventories assuming sales remain at their current level. 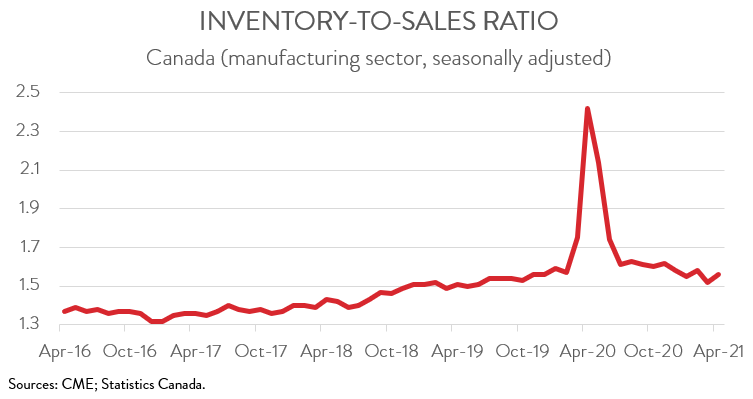 Forward-looking indictors were discouraging. Unfilled orders edged down 0.1% to $87.0 billion in April on lower unfilled orders of aerospace products and parts and computer and electronic products. At the same time, the total value of new orders fell 2.5% to $57.0 billion, as lower new orders in the transportation equipment industry more than offset a spike in new orders for chemical products. 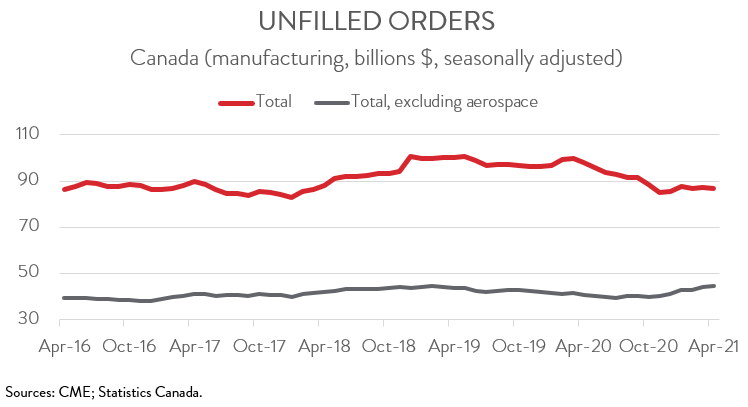 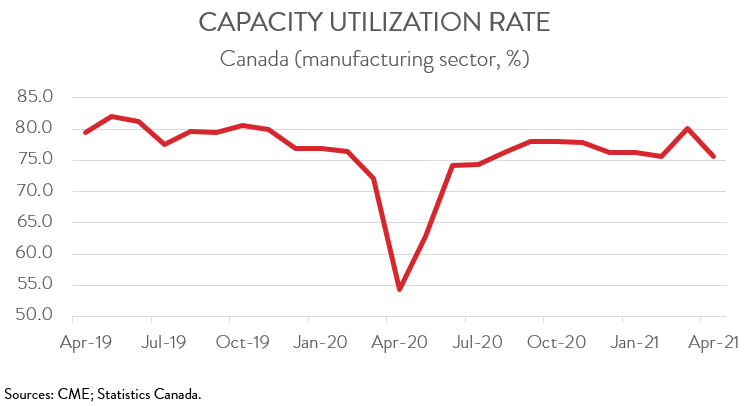