Manufacturing sales fell for the third straight month in November, down by 0.6 per cent to $57.0 billion. This follows an upwardly revised 0.2 per cent decline in October and a 0.1 dip in September. In volume terms, the November decline was slightly steeper at 0.8 per cent. On a year-over-year basis, manufacturing sales were down 0.1 per cent, this metric’s sixth straight month in the red. While this second-half weakness can be partly blamed on soft global trade activity and temporary disruptions, policy action is still required to improve the competitiveness of the Canadian manufacturing sector. 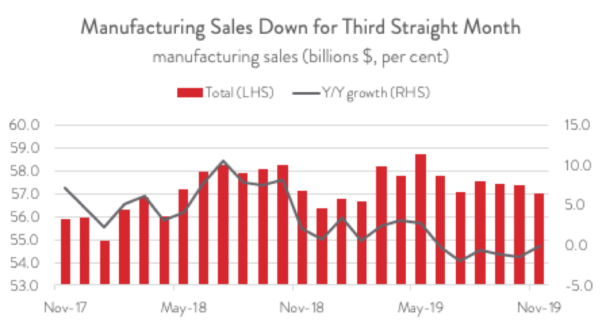 Five of 11 major industries posted declines in November, led by a steep 11.7 per cent drop in primary metals. Statistics Canada noted that shipments at many firms in this sector were disrupted by the CN rail strike, which has since been resolved. Declines were also recorded in chemical products, machinery, food products, and petroleum and coal refining.

The notoriously volatile aerospace industry boasted the biggest gain in November at 8.5 per cent. This industry looks like it enjoyed a healthy 2019, as sales were up nearly 10 per cent year-to-date through November. Motor vehicle and parts sales climbed by 3.3 per cent, its first gain in three months. A rebound in November was expected following the resolution of the US GM strike in late October. Other industries that posted gains included fabricated metals, plastics and rubber products, and paper products. Sales were flat in wood products. 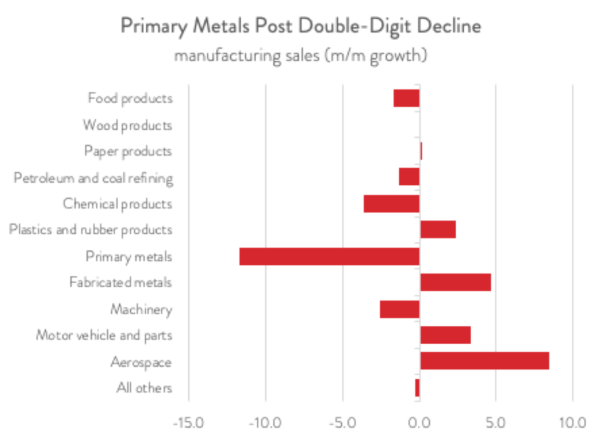 Manufacturing sales fell in eight provinces in November, with the steepest falls recorded in the East Coast provinces of PEI (-11.1 per cent), New Brunswick (-8.3 per cent) and Nova Scotia (-5.7 per cent). Newfoundland and Labrador also saw sales contract, albeit by a more moderate 1.7 per cent. Sales in Alberta were down 2.6 per cent, with the steepest fall coming in primary metals, mirroring the national story. Quebec sales declined by 1.6 per cent, with the largest decreases coming in food, primary metals, and machinery. Sales were also down in Manitoba (-3.1 per cent) and Saskatchewan (-1.7 per cent).

Ontario was the only province to record a significant increase in November, as sales rose 1.4 per cent. This gain was led by motor vehicles and parts, a key provincial industry, along with fabricated metal products and plastics and rubber products. BC was the only other province to boast a sales increase, though the gain was limited to just 0.2 per cent. 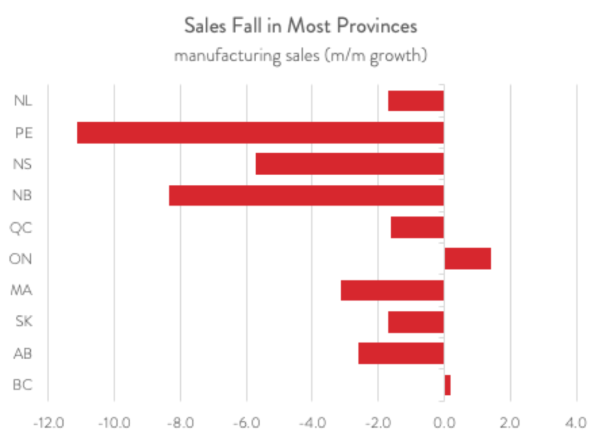 NEW AND UNFILLED ORDERS RISE, BUT SO TOO DOES THE INVENTORY-TO-SALES RATIO

On a more positive note, both new and unfilled orders rose in November, with the former increasing by 1.9 per cent to $57.1 billion and the latter by a more modest 0.1 per cent to $97.8 billion. Gains in these two forward-looking indicators provide some hope that demand will pick up in the coming months.

But, at the same time, manufacturing inventories rose 0.5 per cent to $87.9 billion. This, combined with weak sales, lifted the closely watched inventory-to-sales ratio from 1.52 in October to 1.54 in November. A rising inventory-to-sales ratio is a bearish signal that manufacturers may need to cut back production to better align inventories with sales. 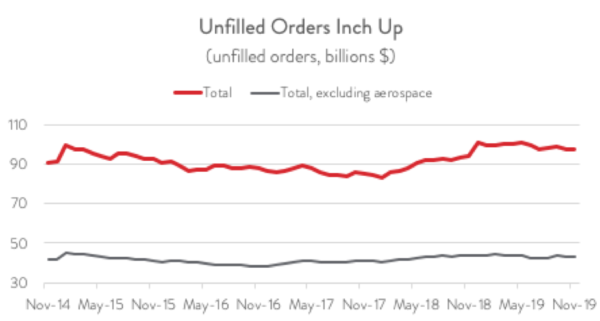