Canadian merchandise exports fell 2.3% to $53.0 billion in September, the biggest decline since February 2021. Merchandise imports fell an even steeper 3.0% to $51.1 billion. In volume terms, the picture was even more disappointing: real exports and real imports were down 3.0% and 4.9%, respectively. The declines in both exports and imports were largely due to the global shortage of semiconductor chips and the resulting impact on North American auto production. 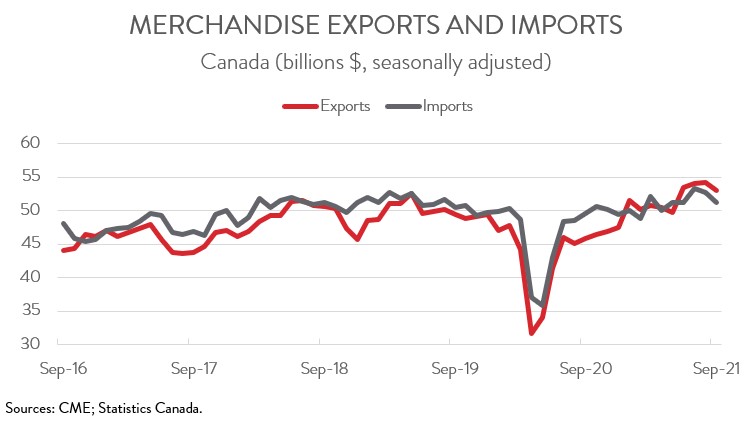 Despite the sharp decline in September, total exports rose 5.0% in the third quarter, with exports of energy products accounting for more than three-quarters of the increase. Still, the report is yet more evidence that supply chain disruptions, which have slowed deliveries and swelled prices, are continuing to hold back manufacturing and trade activity. Although most surveys suggest that manufacturers are optimistic about the near-term outlook, the economic recovery will continue to be choppy due to ongoing supply chain issues as well as labour and skills shortages.

Canada’s merchandise trade balance remained in a surplus position for the fourth straight month, widening from $1.5 billion in August to $1.9 billion in September. It was also the seventh monthly surplus recorded so far this year, the best run since 2014. 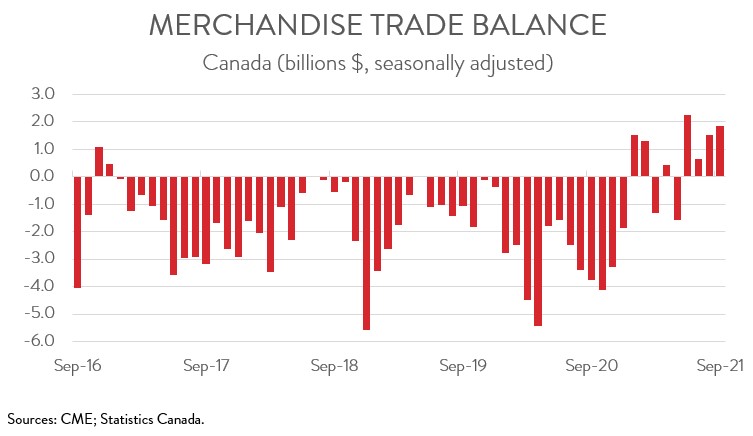 The decrease in exports spanned 6 of 11 major commodity groups. The global microchip shortage continues to wreak havoc on the auto sector. Exports of motor vehicles and parts decreased by 17.9% to $4.6 billion in September, down 40.2% compared to the same month one year ago. (At the same time, imports of motor vehicle and parts fell by 13.6% to $6.6 billion, representing a 24.4% year-over-year decline).

Exports of metal and non-metallic mineral products were also down in September, falling 8.1% to $6.4 billion. According to Statistics Canada, exports of unwrought gold and silver posted a sharp decline, primarily due to lower gold asset transfers to Hong Kong and the U.S. Forestry products and building and packaging materials (-8.1%), aircraft and other transportation equipment and parts (-15.1%), and chemical, plastic and rubber products (-4.3%) were also down on the month.

On the positive side, exports of energy products rose 6.1% to $12.6 billion in September. Crude oil exports reached a record high, thanks mostly to higher prices. The gains in other categories were more modest, including in industrial machinery, equipment and parts (+5.3%), metal ores and non-metallic minerals (+6.1%), and farm, fishing and intermediate products (+2.9%). 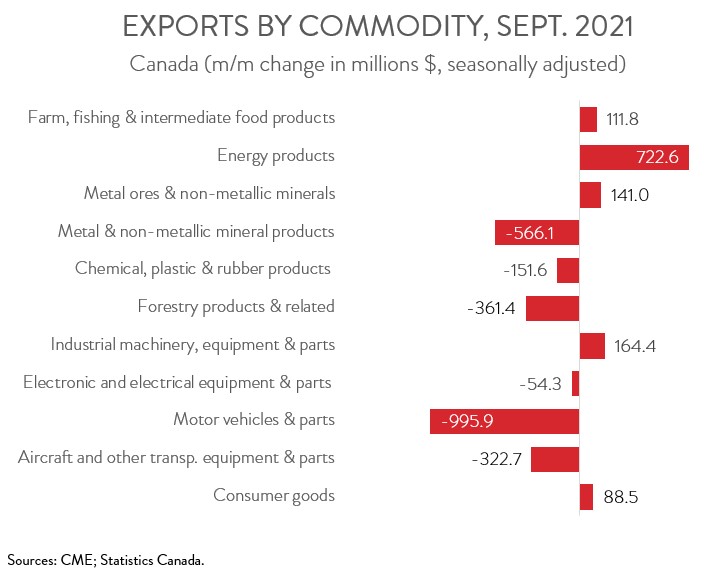 EXPORTS TO THE U.S. DOWN FOR SECOND STRAIGHT MONTH

Exports to the U.S. fell 2.2% to $39.5 billion in September, the second straight monthly decline and attributable mainly to the decline in the trade of motor vehicles and parts. At the same time, exports to the rest of the world decreased 2.6% to $13.5 billion. Among Canada’s major non-U.S. trading partners, exports to South Korea, the European Union, Japan, and Mexico were down, while exports to the United Kingdom and China were up. The increase in exports to the U.K. was largely attributable to higher exports of gold. 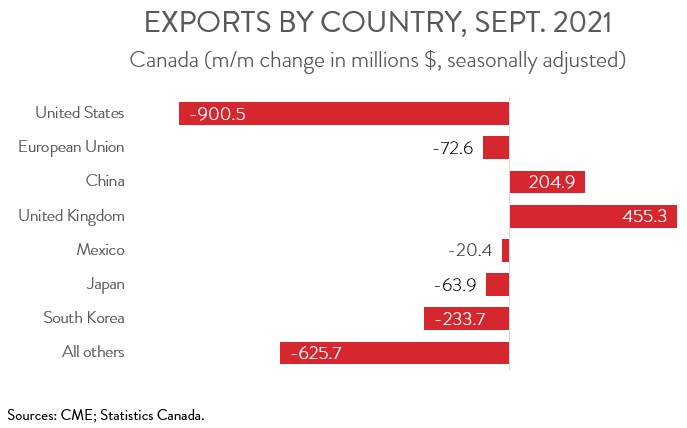