Canadian Merchandise Exports Take a Step Back in August

After three straight monthly increases, including double-digit gains in June and July, Canadian merchandise exports fell 1.0 per cent to $44.9 billion in August. This left exports 7.0 per cent below their pre-pandemic levels. Merchandise imports also fell, down 1.2 per cent to $47.4 billion, placing them 5.1 per cent below their February 2020 levels. In volume terms, the picture was even worse: exports and imports were down 1.4 per cent and 0.5 per cent, respectively. 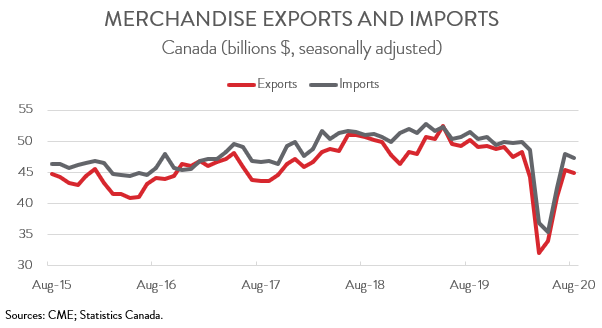 Although the decline was partly attributable to the nearly two-week strike at the Port of Montreal, the August merchandise trade report is another sign that Canada’s economic recovery is slowing following the initial bounce during the reopening phase. Unfortunately, we have now entered the second stage of the recovery, and it is expected to be weaker and more uneven than the first one, especially with COVID-19 cases on the rise in Canada and in several major trading partners. This slowdown is consistent with the expectation that the Canadian economy will take a long time to fully recoup its COVID-related losses.

With imports falling more steeply than exports, the trade deficit narrowed marginally from $2.5 billion in July to $2.4 billion in August. Canada’s trade surplus with the US widened from $2.5 billion to $3.3 billion, but this was partly offset by the fact that Canada’s trade deficit with the rest of the world widened from $5.0 billion to $5.8 billion. 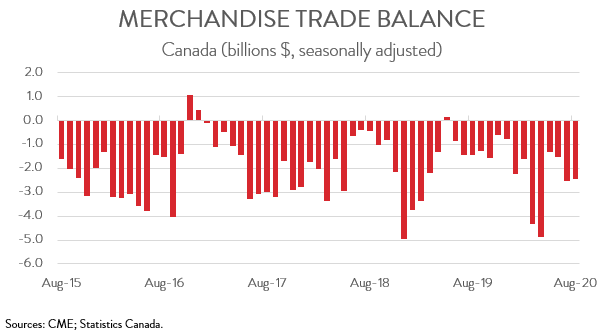 Exports were down in 6 of 11 major product groups, led by notable declines in autos and aerospace. After three straight months of strong gains, exports of motor vehicles and parts fell 6.8 per cent to $7.5 billion. As noted by Statistics Canada, exports of passenger cars and light trucks were abnormally high in July, due to higher auto production as many plants stayed open during the traditional summer shutdown period. Accordingly, despite the August decline, export levels of passenger cars and light trucks were still almost $200 million higher than February levels. At the same time, exports of aircraft and other transportation equipment declined 14.5 per cent, mainly on lower exports of boats and other transportation equipment.

On the positive side, exports of forestry products and building and packaging materials rose 7.6 per cent in August. Lumber exports, which climbed for the fourth straight month, largely powered this increase. The recent strength in lumber exports has been driven by higher prices, due to both reduced supply (lower softwood lumber production) and higher demand (strong housing starts in the US). Meanwhile, exports of energy products increased for the fourth month in a row in August, up 3.5 per cent. Despite this string of gains, exports remain down 30.2 per cent on a year-over-year basis. 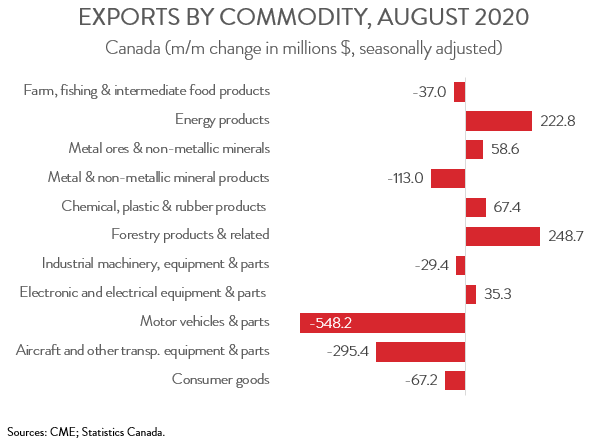 EXPORTS TO COUNTRIES OTHER THAN THE UNITED STATES TUMBLE

Exports to the US rose by $350.6 million in August, the fourth consecutive monthly increase, driven in part by higher lumber exports. With this increase, exports to the US were 6.6 per cent below their February levels.

On the other hand, exports to the rest of the world fell 6.8 per cent to $11.2 billion, their lowest level since November 2017. In fact, exports were down among all of Canada’s major non-US trading partners, including notable declines to the UK, the EU (excluding the UK), and Japan. 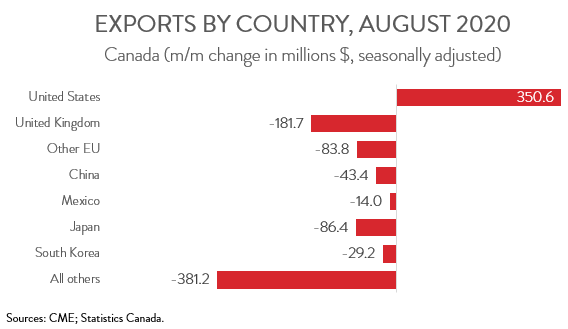