Manufacturing growth contributes to a strong October for the Canadian economy

After a disappointing performance in the previous month, the Canadian economy rebounded strongly in October, bolstered by a recovery in manufacturing and a more stable energy sector.

All told, GDP was up by 0.3 per cent compared to September – equivalent to an annualized increase of about 3.7 per cent. That represents the best month-over-month growth in the Canadian economy since May and was easily enough to overcome September’s losses, which were revised downwards slightly, from -0.9 per cent (annualized) to -1.1 per cent. 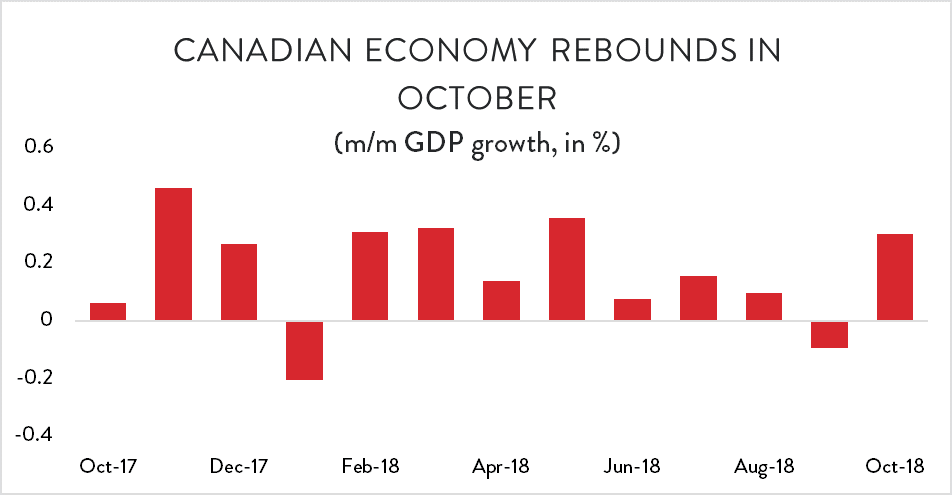 As a result, Canada is tracking slightly ahead of expectations for 2018 as a whole. Most economic forecasts called for growth in the range of 2.0 per cent this year. Thanks in part to October’s strong showing, GDP growth is now tracking in the range of 2.3 per cent through 10 months compared to the same period last year.

GDP growth in October was relatively widespread across the economy; of the 15 major industrial groupings, 11 were higher and only four, lower. Leading the way on the positive side were industries related to finance, insurance and real estate. Driven by a spike on the finance side, GDP in these so-called FIRE industries was up by an annualized 5.3 per cent ($1.6 billion) compared to September. The manufacturing sector posted even stronger growth (8.2 per cent, or $1.3 billion), while wholesale trade industries rebounded well from a poor showing in September. 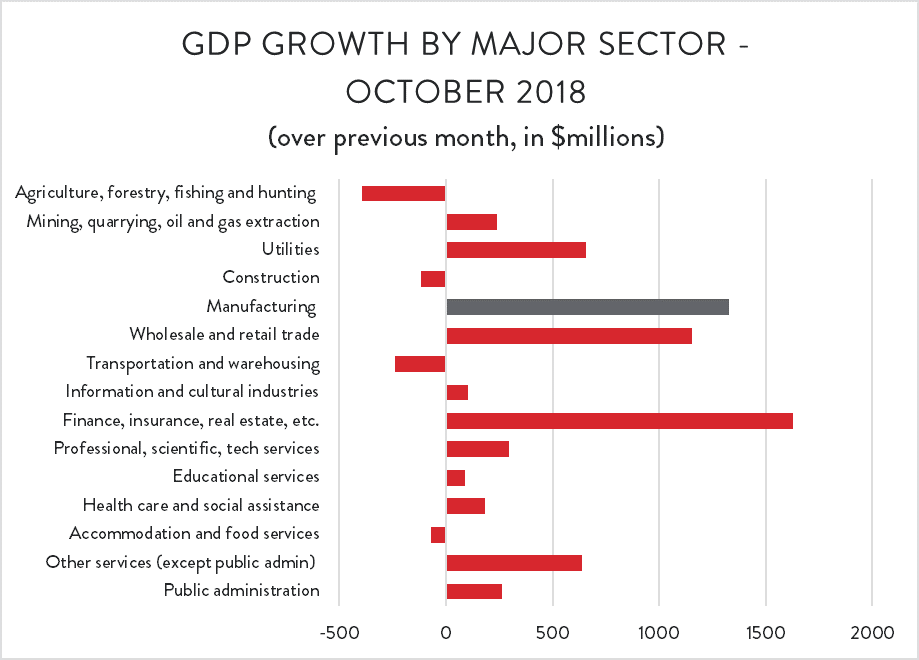 On the negative side, October was a forgettable month for renewable resources industries; a commodity price correction contributed to a poor month for businesses in forestry and logging, while a drop in animal production drove agriculture value-added activity lower. There were also modest declines in transportation and warehousing, as well as accommodation and food services, and construction. The drop in construction GDP somewhat concerning for future economic growth in this country, as it reflects ongoing weakness in residential building activity, as well as flat non-residential investment. 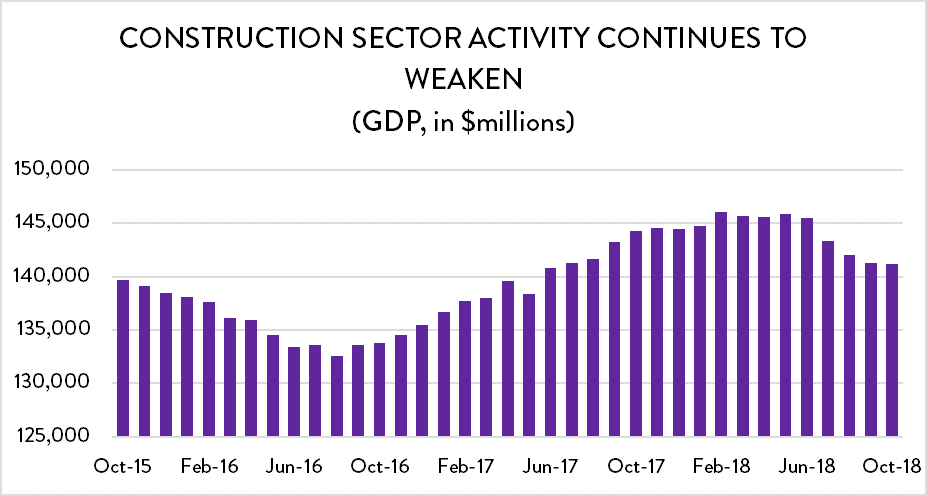 Looking more closely at manufacturing, the strong gains in October ended two consecutive months of decline in the sector. However, that increase was not quite enough to overcome a poor showing in September. GDP that month fell by (a revised annualized rate of) 8.2 per cent. October saw an identical-sized increase on a percentage basis, but since that growth was on a smaller base, the dollar value of manufacturing GDP in October was still below September levels. 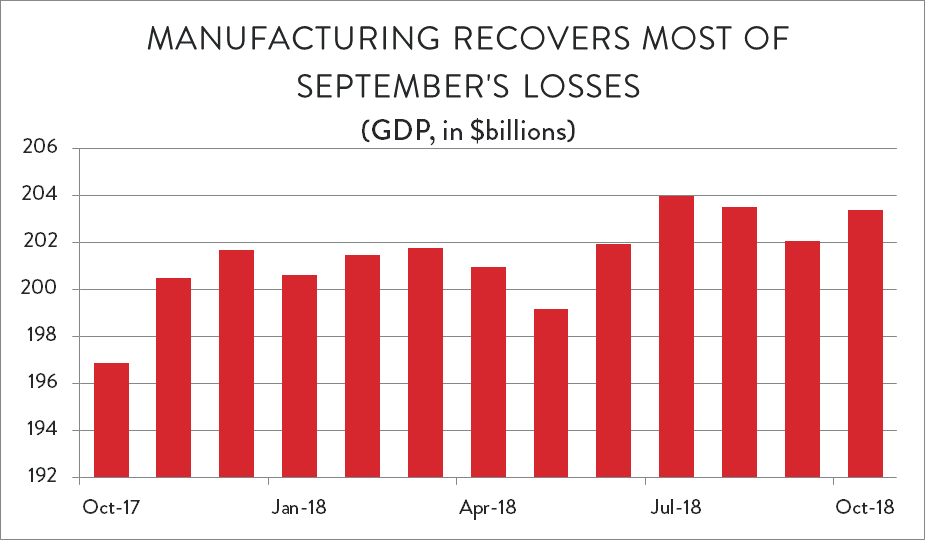 The good news is that because of weakness at this same point in 2017, year-over-year growth in manufacturing remains relatively strong. Through 10 months, manufacturing GDP is tracking 2.6 per cent higher than it was over the same period last year – outpacing growth for the Canadian economy as a whole.

While GDP gains in the overall economy were widespread, the results within the manufacturing sector were more mixed. Of the 11 major manufacturing sub-sectors, GDP was higher in six, while it fell in the remaining five. On the positive side, there was a significant jump in value-added machinery output, which increased by 5.5 per cent compared to September – equivalent to an annualized growth rate of more than 90 per cent. October also saw a welcome recovery in food processing, which has struggled in recent months. GDP in those industries rose by 1.9 per cent (nearly 25 per cent on an annualized basis) but even so, remains 1.3 per cent below its July peak. Meanwhile, pharmaceutical industries drove GDP in chemicals higher, while an uptick in steel and foundry activity had the same impact on primary metals manufacturing. 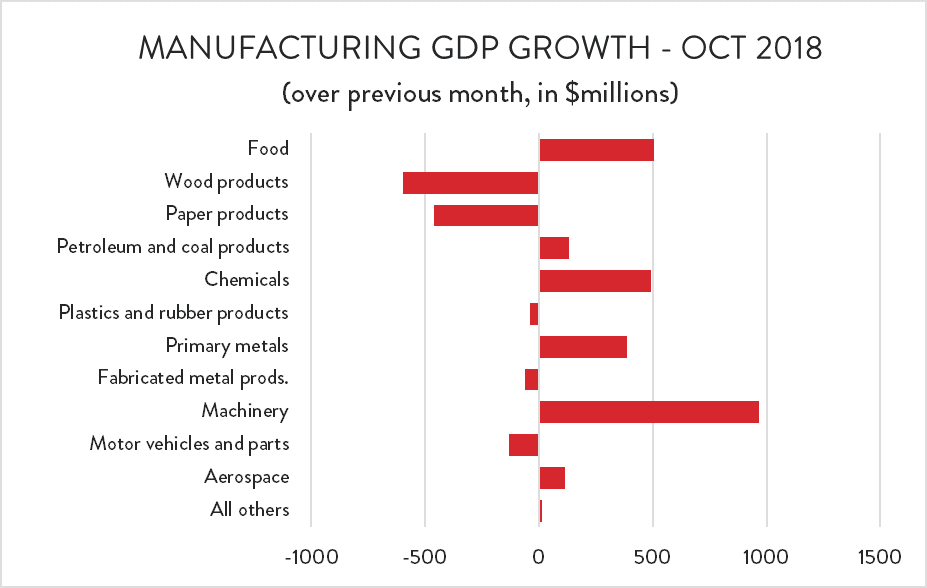