April was not a very exciting month for the Canadian job market as total employment was effectively unchanged compared to March. All told, there were 1,100 jobs lost in April – an inconsequential shift compared to the 18.6 million employed Canadians that month.
Even so, April marks the second time in just four months that employment in Canada has fallen. After shedding 88,000 jobs in January, the economy recovered about half that number in February and March, but progress stalled in April. There are still 41,400 fewer employed Canadians today than there were in December. 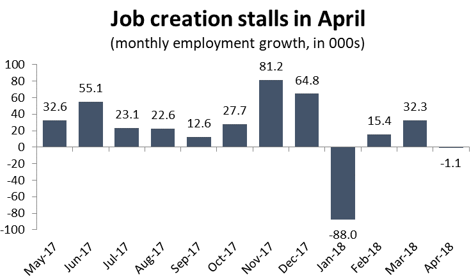 Flat job creation meant that the unemployment rate in Canada was also unchanged in April, remaining at 5.8 per cent where it has been since February. One of the main factors keeping the unemployment rate at or new historic lows is the continued decline in labour force participation. As the population ages, a growing share of the labour force is entering the 55+ age category – the point at which workforce attachment begins to weaken.
The good news in April was that even though total employment was flat, there were improvements in the quality of work available. Specifically, there were about 28,800 full-time jobs created last month, offsetting a nearly identically-sized drop in part-time employment.
In fact, full-time job creation has been one of the biggest bright spots for the Canadian labour market so far this year. Through the first four months of 2018, there are about 286,400 more employed Canadians than there were over the same period last year. However, the number of full-time jobs has increased by about 352,600 positions, while there are about 66,200 fewer part-time jobs available. 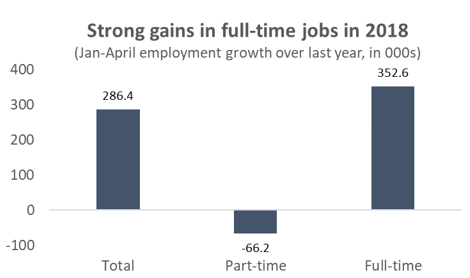 Across the country, there was a mix of gains and losses but no province stood out as having a notably good or bad month for job creation. On the positive side, Manitoba had the best showing in April, adding 4,200 total jobs – an increase of about 0.7 per cent compared to March. Nova Scotia also fared well, creating 2,700 jobs (0.6 per cent). There were also modest employment gains in BC, Ontario and New Brunswick. 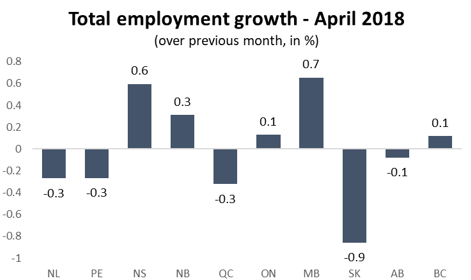 On the negative side, the only significant job losses were in Saskatchewan and Quebec. Saskatchewan saw total employment drop by about 4,900 positions in April – a decrease of 0.9 per cent compared to the previous month. Job losses in Quebec were larger in absolute terms (13,800 jobs), but the overall impact was smaller (a 0.3 per cent decline).
At the industry level, there were major shifts in four areas and little movement elsewhere. There were large increases in the number of jobs in professional, scientific and technical industries, as well as in accommodation and food services. The former added 21,300 jobs in April, while 16,900 were added in the latter. Those gains were offset by similar-sized losses in wholesale and retail trade (22,100 jobs) and construction (18,900 jobs). 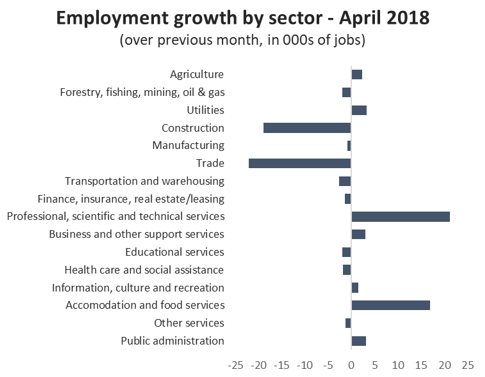 As with most other industries, employment in manufacturing was relatively flat in April, with a total decline of about 800 positions compared to March. Although April marked the third consecutive month of job losses in manufacturing, total employment in the sector remains well above 2017 levels. From January through April, there are about 58,600 more manufacturing jobs in 2018 than there were over the same period last year. 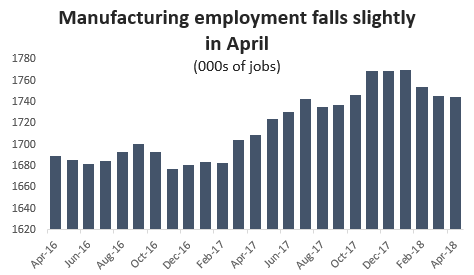 Provincially, there were notably losses in Ontario, where there were about 8,800 fewer manufacturing jobs in April compared to March – a decrease of about 1.1 per cent. Those losses continue the recent struggles for Ontario manufacturers, which have shed about 20,400 jobs since January. Manufacturing employment was also down in Quebec, Newfoundland and Labrador, New Brunswick and Saskatchewan. 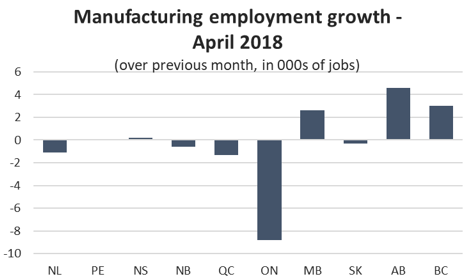 Meanwhile, the gradual recovery in Alberta’s manufacturing sector continued in April as the province slowly climbs out of the hole created by the decline in energy sector activity since 2014. Led by the creation of 3,400 jobs in the Edmonton area, overall manufacturing employment in the province rose by 3.5 per cent in April (about 4,600 total jobs). Through the first four months of the year, Alberta manufacturing employment is tracking more than 15 per cent higher than in 2017, but remains well below its early 2015 peak. 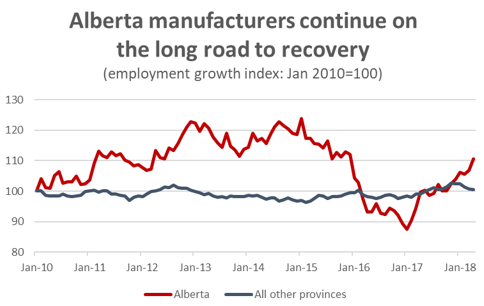 Graph showing that Alberta manufacturers are on the road to recovery. Labour Force Survey Analysis, April 2018.