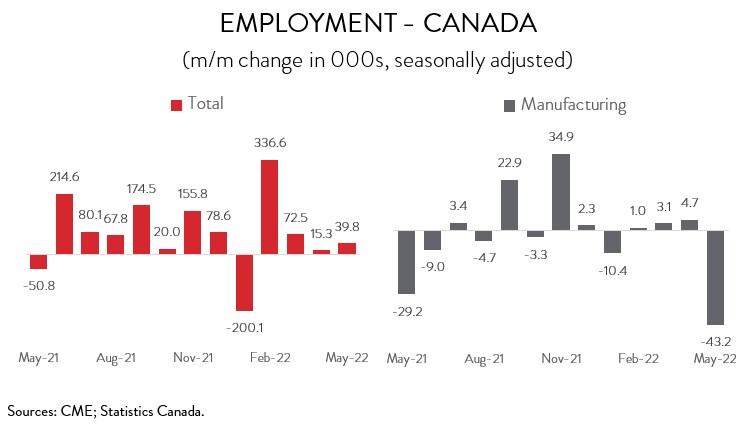 Employment growth in the services sector was strong, with wholesale and retail trade (+37,800), educational services (+23,900), professional, scientific, and technical services (+20,500), and accommodation and food services (+19,800) leading the charge. On the other hand, employment on the goods side of the economy was down. In fact, the natural resources sector (+8,300) was the only goods-producing industry to experience meaningful job growth last month.

The increase in employment in May continues a solid run for Canada’s job market. With job vacancies at a record high and the unemployment rate at a record low, the economy is clearly operating above full employment, and this is putting upward pressures on wages. In fact, average hourly earnings were up 3.9% year-over-year in May, the fastest pace since February 2021. This suggests that the Bank of Canada will need to continue raising interest rates aggressively to curb soaring inflation.

Manufacturing employment fell by 43,000 (-2.4%) in May, erasing gains seen during the fall of 2021 and returning employment in the industry to a level on par with May 2021. This was the biggest monthly decline since April 2020 when the first wave of COVID-19 hit.

UNEMPLOYMENT RATE FALLS TO YET ANOTHER ALL-TIME LOW

The headline unemployment rate ticked down from 5.2% in April to 5.1% in May, marking three consecutive months in which this key labour market indicator has reached a new record low. In contrast, the jobless rate in manufacturing increased from 2.7% to 3.0%, the first increase in three months. 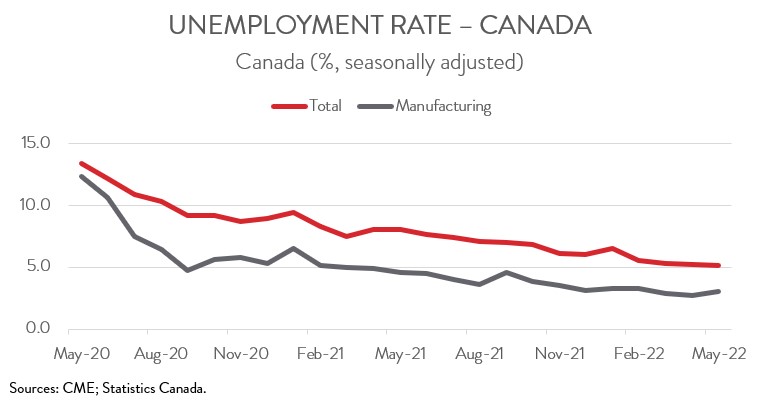 The big drop in manufacturing employment is clearly a cause for concern. However, the silver lining is that it helped to ease pressure on wages. In fact, average hourly earnings in manufacturing fell by 2.0% in May, the biggest monthly decline in since May 2020. As a result, year-over-year wage growth in the sector slowed from 6.2% in April to 4.5% in May. Still, the combination of a very low unemployment rate and record job vacancies makes it likely that wage growth in manufacturing will pick up again over the near-term. 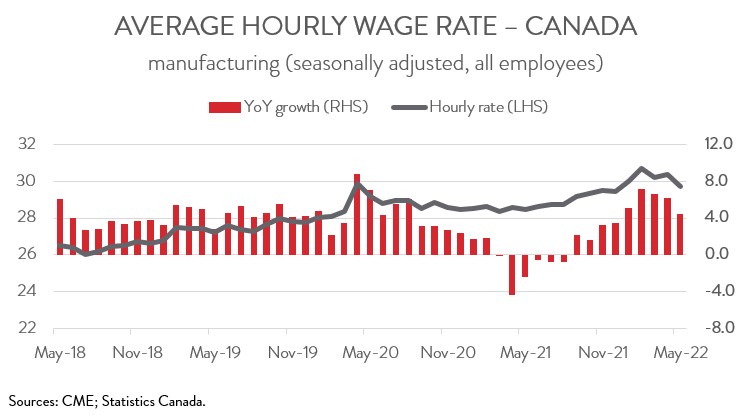 Regionally, employment was up in seven of ten provinces in May. The largest absolute increase was recorded in Alberta (+27,600), while the largest proportional increases were observed in Newfoundland and Labrador (+4,100) and Prince Edward Island (+1,100). This was Alberta’s seventh consecutive monthly increase and the largest gain since September 2021. On the negative side, employment in New Brunswick fell by 3,900 in May, partially offsetting gains in the previous two months. 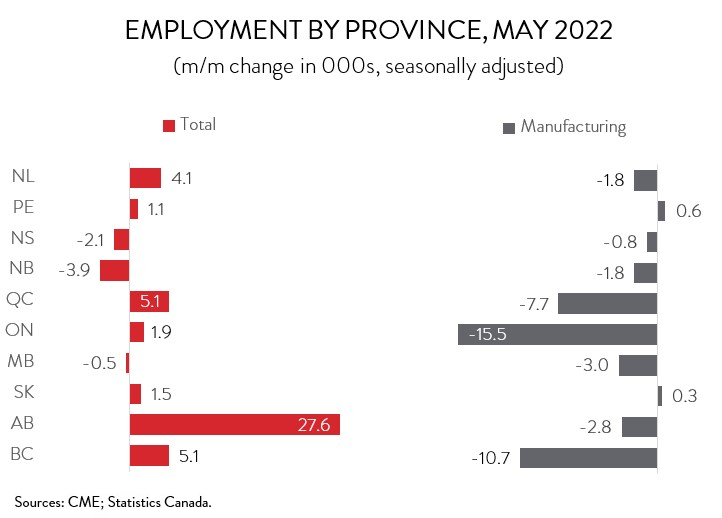