After falling for four consecutive months, manufacturing sales held steady at $70.4 billion in September. In real terms, the picture was more downbeat, with sales in constant dollars down 0.2%. 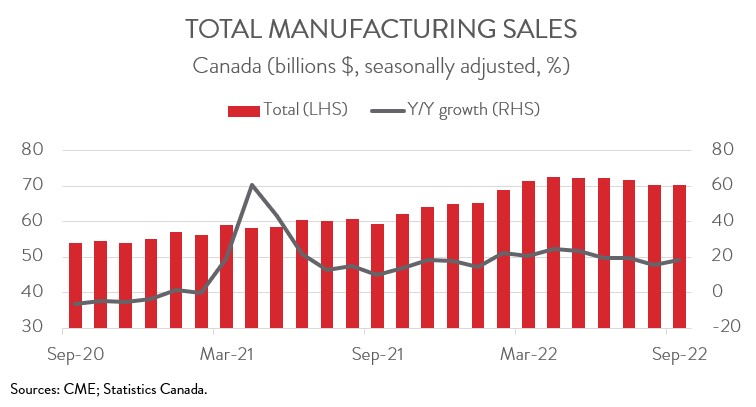 On a quarterly basis, manufacturing sales in current dollars decreased 2.2%, down for the first time since 2020Q2, while sales in constant dollars fell 0.8%, down for the first time since 2021Q3. This indicates that Canada’s manufacturing sector is being weighed down by slowing economic growth both at home and globally, which is piling on to existing problems manufacturers are facing, including labour shortages, disrupted supply chains, and high production costs.

Sales increased in 6 of 11 major industries in September. Sales of aerospace product and parts surged 11.1% to $1.7 billion in September, more than making up for the 4.0% decline in August. However, as noted by Statistics Canada, a strong greenback was a key factor behind this monthly growth as some large aircraft manufacturers reported their sales in US dollars.

After two straight monthly declines, sales of primary metals rose 2.9% to $5.6 billion in September, largely on higher volumes as sales in real terms were up 4.2%. However, even with this gain, nominal sales decreased 11.4% on a quarterly basis, down for the first time since 2020Q2. 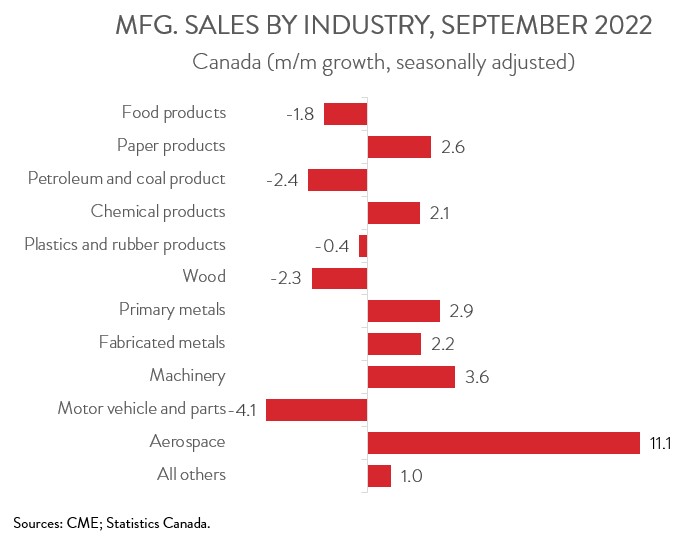 On the flipside, sales of motor vehicles and parts tumbled 4.1% to $6.7 billion in September, the second straight monthly decline. On a quarterly basis, sales were up a marginal 0.6%, suggesting that the industry is continuing to struggle with shortages of semiconductors and other raw materials.

Petroleum and coal product sales decreased 2.4% to $9.5 billion in September, down for the fourth month in a row. Sales in real terms fell 2.0%, attributable to oil refinery maintenance in Eastern Canada. Prices for refined petroleum and energy products also declined, weighed down by concerns about slowing global economic growth and heightened geopolitical uncertainties.

After reaching a record high in August, sales in the food industry dipped 1.8% to $11.9 billion in September, mainly on lower sales of meat products. Sill, food sales on a quarterly basis were up 2.6%, setting a record high.

Finally, wood product sales fell 2.3% to $3.6 billion in September. This was the sixth straight monthly decline, coinciding with a slowdown in North American housing market activity.

Regionally, sales were up in just two of ten provinces in September. Sales in Quebec climbed 4.1% to $17.5 billion in September, the first increase in three months. The gain was largely attributable to higher sales in the primary metal, aerospace product and parts, and machinery industries. 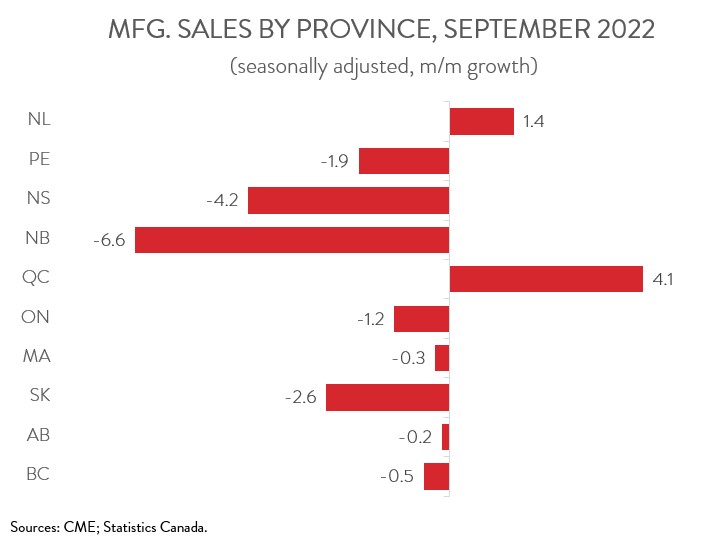 At the other end of the spectrum, sales in Ontario decreased 1.2% to $30.6 billion in September, following a flat reading in August. The decrease was mainly driven by the motor vehicle industry, as shutdowns and a lack of raw materials at some major auto plants impacted sales. Higher sales in the chemical industry acted as a partial offset.

Total inventories rose to yet another record high, climbing 1.3% to $122.0 billion in September, the 21st consecutive monthly increase. As a result, the inventory-to-sales ratio increased from 1.71 in August to 1.73 in September, up for the sixth month in a row and the highest point since June 2020. This ratio represents the number of months it would take to completely clear inventories assuming sales remain at their current level. 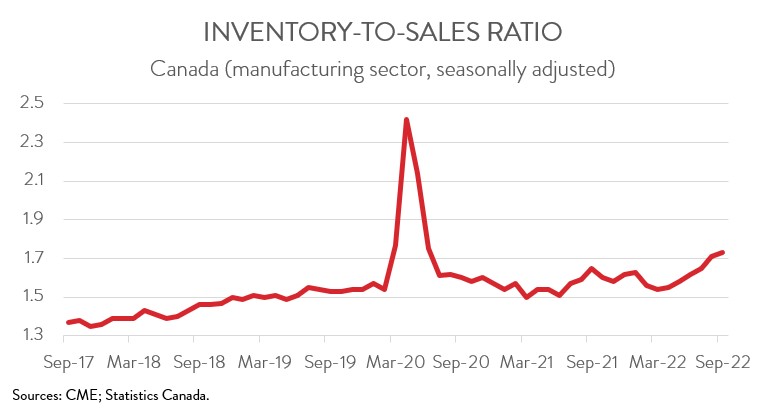 Forward-looking indictors were encouraging. The total value of unfilled orders rose 1.5% to $109.4 billion in September, led by higher unfilled orders in the transportation equipment, fabricated metal product, and machinery industries. 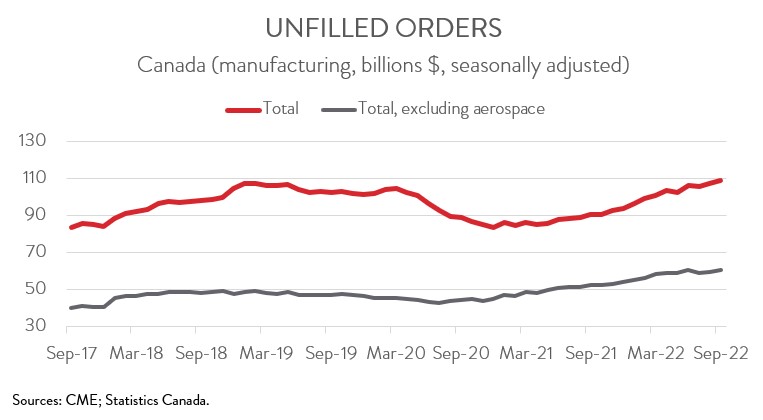 Finally, the manufacturing sector’s capacity utilization rate edged down from 77.8% in August to 77.4% in September. The petroleum and coal product and transportation equipment sectors experienced the most significant declines, while the primary metal and fabricated metal product industries posted the most notable increases. 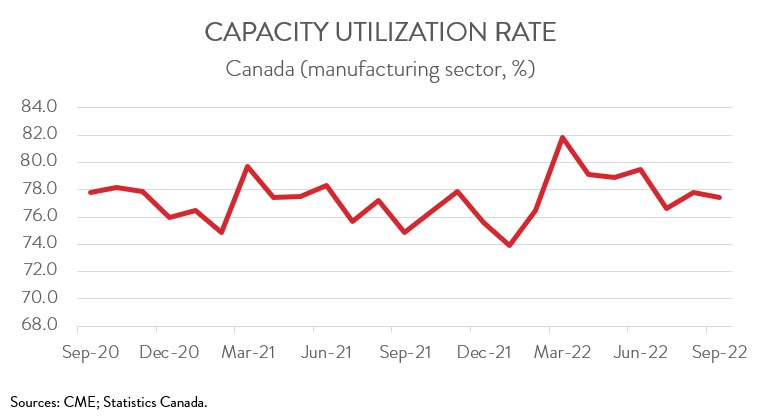